It is time, again, for Cine Gear Expo Los Angeles, and Canon is present with its latest 4K digital cinema products for professionals. 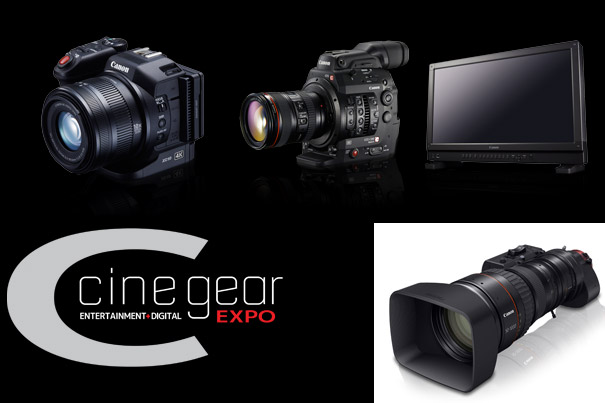 Located at the Studios at Paramount Pictures in Hollywood, CA, this year’s edition of Cine Gear Expo will be open from Thursday, June 4 through Sunday, June 7. Canon will be present and besides the gear they will host educational panels with discussions featuring industry professionals discussing their craft.

Highlights of the show, when it comes to Canon, will be the new EOS C300 Mark II Digital Cinema Camera, along with the XC10 4K Camcorder, and the 4K reference monitor DP-V2410 introduced in April this year. But Canon will also have their collection of lenses on display, including the new CINE-SERVO 50-1000mm T5.0-8.9 ultra-telephoto 4K zoom lens, the only lens of its kind in the industry. In addition, the new 50.6 megapixel, high-resolution EOS 5DS and 5DS R Digital SLR cameras will be shown.

Although were still a few months away, Canon will use the moment to remember everybody that they are celebrating this year the 10th anniversary of the introduction of the EOS 5D series of cameras. Launched in September 2005, the EOS 5D enabled advanced-amateur photographers to take advantage of the impressive high-image-quality performance and photographic expression unique to DSLR cameras equipped with a 35mm full-frame CMOS sensor, which, at the time, primarily targeted only professional photographers.

The EOS 5D was followed, in November 2008, by the EOS 5D Mark II, which, apparently without Canon expecting it, launched the video revolution. This camera, which was the first in the EOS series to include a function enabling the capture of Full HD video, facilitated the widespread adoption of DSLR cameras as a tool for capturing video. The EOS 5D Mark II made big waves in the motion picture and video production industries by delivering the exceptional image quality and impressive background blur and other characteristics unique to DSLR cameras, while also allowing users to take advantage of Canon’s vast interchangeable EF lens lineup spanning more than 64 models, enabling a wide spectrum of digital imaging creativity and possibilities.

In March 2012, Canon introduced the EOS 5D Mark III, featuring dramatic improvements in still-image and video quality as well as enhanced AF precision and a faster maximum continuous shooting speed. Since its launch, the EOS 5D Mark III has garnered high acclaim in the market and, as the company’s core advanced-amateur digital SLR camera, has come to serve as a driving force for the EOS series.

At Cine Gear Expo, while remembering all the background for the EOS 5 family, Canon will display their new 50.6 megapixel, high-resolution EOS 5DS and 5DS R Digital SLR cameras soon to be available in the market.

While the equpment may be the reason many visit the exhibit, it should be remembered that all gear only serves one purpose: to create still and moving images, photos and movies, big and small. So, the educational program should be attended. In the Paramount Theater during the Expo will be three Canon-hosted educational panel discussions, featuring industry professionals discussing their craft, and how Canon products have helped power their work. The panel discussion schedule is as follows:

Follow the link for more information about Canon at Cine Gear Expo LA 2015.