Canon invites filmmakers to its Creative Studio, as it returns to the 2017 Sundance Film Festival as a sponsor, again this year. It’s a time to hear the stories behind the adventure of moving images. 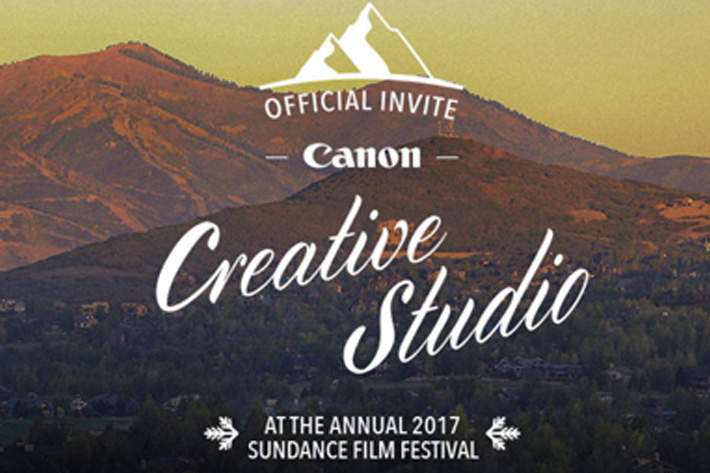 Panel discussions, a complete display of Canon’s offer in terms of its Cinema EOS range and multiple celebrations throughout the 2017 Sundance Film Festival days, January 19–29, mark the return of Canon as Sustaining Sponsor of the festival.

With at least 46 of the 213 films premiering as part of this year’s slate at Sundance – over 20 percent — shot using Canon equipment, which represents over 20 percent of all the films presented, Canon uses the festival at Park City, Utah as a display gallery for its hardware. Festival projects filmed using Canon cinema cameras include the first three episodes of the new Amazon Studios series I Love Dick, as well as documentary and narrative features including Menashe, Deer Squad: The Movie, Motherland, Downward Dog, and ICARUS.

Guests at the Canon Creative Studio will be able to explore Canon’s new flagship cinema camera, the Canon EOS C700 Digital Cinema Camera, the 4.5 million ISO Canon ME20F-SH multi-purpose camera, and the Canon CN-E 50-1000mm CINE-SERVO lens, among other gear on display. On the output side, guests will be able to see the color accuracy and HDR capabilities of Canon’s line of 4K Reference Displays.

But the festival is much more about the results we are able to create with so much technology, so the Canon Creative Studio will also host cinematographers, directors, editors, producers, and crew at the invite-only Raise Your Glass To Cinematography cocktail party (Sunday, January 22), Canon’s fifth annual celebration toasting the filmmakers of the Festival.

“It is our honor to celebrate the work of Sundance Film Festival cinematographers,” said Yuichi Ishizuka, president and COO, Canon U.S.A.  “Through the eyes – and lenses – of these talented artists, we see how the visual language of filmmaking evolves and innovations in camera technology are applied to storytelling.”

With a nod to Canon’s deep roots in still photography, Michael Ori will be returning to shoot professional headshots of Creative Studio guests.  This year, Ori will take his photographs with the new Canon EOS 5D Mark IV, the latest in Canon’s EOS DSLR camera series.  Canon will send guests home with an 8×10 copy of their portrait, printed on-site with the Canon imagePROGRAF PRO-1000 Professional Inkjet Printer.  In an exciting new collaboration with IMDbPro, the essential resource for entertainment industry professionals, filmmakers will be able to instantly upload their newly snapped portraits to their IMDbPro profiles.  The IMDbPro station will be open January 21-23, from 11am-5pm.

On Monday, January 23, Canon will present a screening and panel called “The New EOS C700:  A Q&A with the The Calling Filmmakers.”  Following a screening of The Calling, the first film shot on the EOS C700, Canon’s Senior Film and Television Advisor Tim Smith will lead Director Tyler Stableford and Colorist Billy Hobson in a conversation exploring the versatility of the EOS C700’s low-light capabilities and vast dynamic range.

Follow the link for more information about attending and for a full schedule of events for Canon’s activities at the 2017 Sundance Film Festival.