With the rumours of a 4K camera for NAB 2015 growing up, Canon announces they’re the “Number One” in the global interchangeable-lens digital camera market for the 12th consecutive year. In China they showed a 4K concept camera. 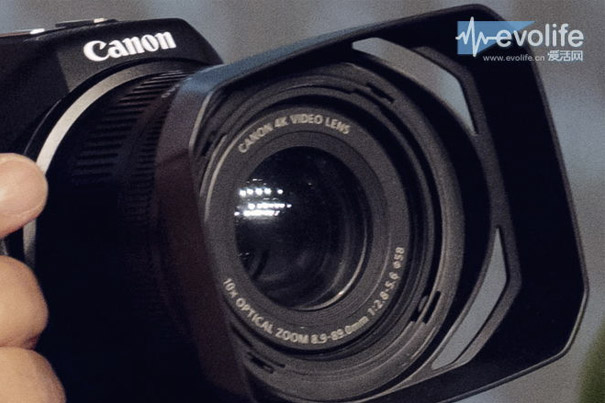 Images from a presentation said to be of the new 4K camera from Canon that in April will be launched at NAB 2015, in Las Vegas, are available online since today, some of them showing actor Jackie Chan on stage with the President & CEO of Canon China, Hideki Ozawa.

From the website EvoLife article one understands that the camera presented is a concept camera that looks like a DSLR but is somehow different, with a Canon 4K Video lens, a 10X optical zoom 8.9-89mm f/2.8-5.6 fixed lens (equivalent to 24-240mm in 35mm format) associated with what seems to be a 1” CMOS sensor. The article also mentions that the camera may have an electronic viewfinder (EVF), meaning Canon will go a completely different way from their DSLRs, if all this is confirmed at NAB 2015. 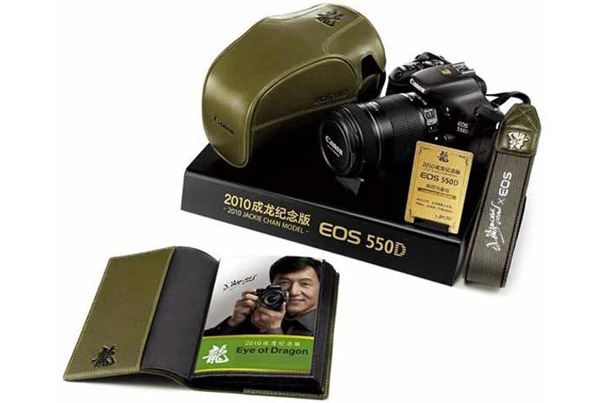 It’s interesting to see Jackie Chan appearing on stage, but it should not be a surprise as he is spokesperson for Canon in China. He is known for being a Canon user and even had a special edition of the EOS 550D created, the Jackie Chan Eye of the Dragon series. So, it makes complete sense for a presentation in China of a Cinema camera to choose him as a guest. Although the 4K concept camera was shown, the presentation in Shanghai was centered on the new EOS 5DS and 5DS R cameras, along with the EOS 750 and 760 models from Canon.

The DSLRs continue to be an important element of Canon’s presence in the photographic market and the recent news about Canon’s position in the industry explain, probably, why Canon takes time to introduce new models and even follow trends other brands explore: they are celebrating their 12th consecutive year at number one position, in terms of volume, in the global interchangeable-lens digital camera market, including digital SLR and compact-system cameras. Why change strategies for a winning team?

According to Canon’s press-release, the company’s run “as market leader began in 2003, a time when digital SLR cameras were still very much in their infancy, and coincided with the launch of the company’s ground breaking EOS 300D. Offering consumers a compact, lightweight design at a competitive price, the EOS 300D was a true innovation and set the stage for Canon’s growth in the digital SLR market. Since then, Canon has continued to challenge and innovate and has launched a host of industry defining products, including the EOS-1D series for professional users, and the EOS 5D series, which paved the way for digital SLR video recording thanks to its full-frame sensor employing a video-capture function.” 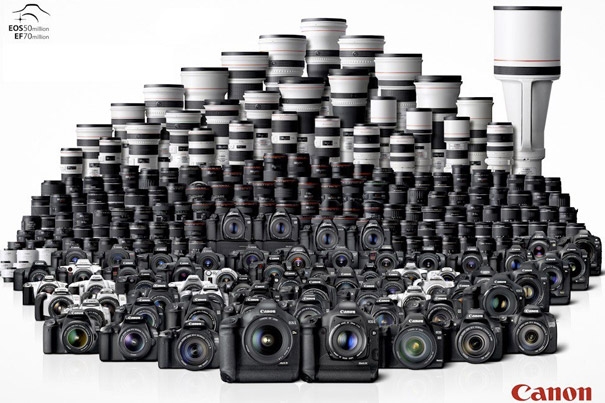 More recently, in October 2014 Canon launched the EOS 7D Mark II for advanced-amateur users, which has garnered high acclaim for its fast continuous shooting speed of 10 frames per second and superior autofocus performance. The range was further bolstered in February of this year with the introduction of five new camera models. The new line-up includes the EOS 5DS and 5DS R, which boasts the world’s highest pixel count among 35 mm full-frame sensor digital SLR cameras; the EOS 760D and EOS 750D – two entry-level digital SLR cameras; and the EOS M3 – a digital compact-system camera which offers a premium performance for enthusiast photographers.

Furthermore, in April 2014 Canon celebrated an impressive lens-manufacturing milestone with the production of its 100 millionth EF-series interchangeable lens for EOS cameras. Canon’s extensive EF lens-series line-up, which currently comprises a total of 97 models (including EF Cinema Lenses), is a particularly strong offering, opening up EOS users to a wide spectrum of imaging possibilities and helping them create rich, diverse photography as they explore and capture the world around them.

From the EOS 300D right up to the EOS 7D Mark II and recent 2015 unveilings, it is Canon’s impressive camera line-up and dedication to progression that has kept the company ahead of all rivals over the last 12 years – reaffirming it as an industry defining company which shapes trends and meets consumer needs head on.

Next step, it seems, is a 4K camera that many have been waiting to see for quite some time. NAB 2015, in April, will be the official launch platform for the new camera. Is this the so called GH4 competitor? With a 1″ sensor, if that’s confirmed, along with a fixed lens, it does not seem to aim at the same segment. What exactly does Canon have in mind, if this concept camera becomes a reality? 4K for the masses? Or for professionals looking for a small camera that goes everywhere?