Clear-Com will demonstrate at NAB Show New York the new Repeat8-NANO Series along with other BroaMan solutions for audio and video signal transport and conversion. 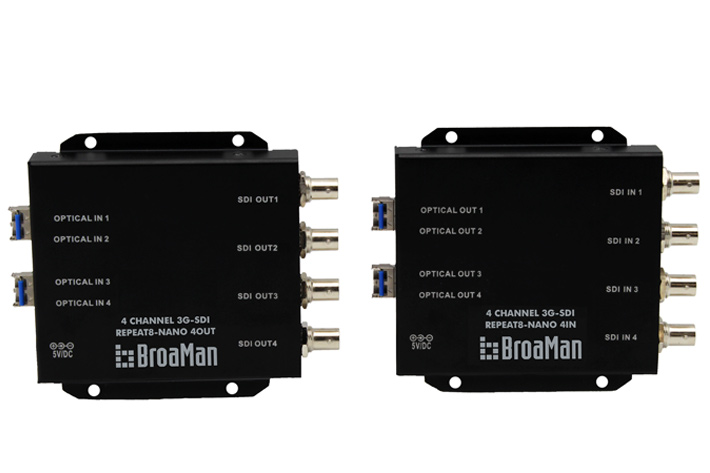 Introduced at IBC 2017, the compact Repeat8-NANO series of media converters is an affordable, entry-level solution within the BroaMan portfolio. Discover it at Clear-Com’s booth at NAB NY.

Clear-Com, a leader in real-time communications and connectivity solutions, is broadening its current portfolio of audio and video networking solutions from BroaMan with the Repeat48 Series, Route66 Series and the new Repeat8-NANO Series–all now available through Clear-Com in the United States.

Launched at IBC 2017, the compact Repeat8-NANO series of media converters is the smaller brother of the well-established Repeat48, offering ultra-fast electrical-optical-electrical conversion for 3G/HD/SD-SDI at an affordable, entry-level price point. This complete, plug-and-play 4K fiber transport comes in a single box and is therefore ideally placed for facilities requiring simple 4K transmission. It is available in two stand-alone versions:

Both devices can be connected with a quad or duplex fiber, creating robust and cost-efficient four-channel point-to-point transport. Each device can also be connected to the Route66 for remote routing of the video I/O.

Simon Browne, Vice President of Product Management, Clear-Com, commented, “With the integration of digital intercom and routable video over very low latency fiber connections, remotes and venue operations have not only become easier to distribute but also much smaller and lighter. The use of fiber also makes it plug-and-play with deterministic latencies and quality.”

The Repeat48 Series media converter comes in a 1RU form factor, offering similar features to the Repeat8-NANO, but with either 12 or 24 channels. Repeat48 is available with or without a built-in WDM module. There is also a custom version offering additional hardware features.

The Route66 Series is a group of fiber interfaces that routes multiple professional video with digital audio signals, such as SD/HD/3G-SDI over the same optical fiber. The panels have a 40×40 optical MUX and router for up to 24 BNC-SDI 3G/HD/SD video ports, up to 20 duplex or 36 simplex protocol-independent LC fiber ports.

The benefits for customers is that the Clear-Com Eclipse-HX system directly controls the BroaMan system, and can control all features such as standard crosspoint matrix for BroaMan video and Optocore audio, in addition to Optocore’s mic preamp gain and any other setting which is normally handled in Optocore Control Software. Going forward, the control surface can be any Clear-Com key panel, simplifying the system control protocol when neither software nor computer are required.

Maciek Janiszewski, Technical Sales Manager, BroaMan, said, “The new control feature provided by Clear-Com is a great application for both small and large users of a Clear-Com/BroaMan/Optocore combination. It shows our mutual commitment to providing complete, state-of-the-art solutions.”

The Route66 routes inputs from 3rd-party video or from fiber from other BroaMan devices, such as MUX-22 Series, Repeat48 or Repeat NANO Series, under user control. The protocol independence provides for full flexibility and, as Route66 Series interfaces do not code or decode the signals, the latency is near zero. A new feature for Route66 is its ability to provide video route redundancy over fiber when used with a redundant pair of MUX22 devices.

These audio and video network solutions, as well as Clear-Com’s intercom solutions, will be on display in the company’s booth N332, Hall B, Level 3 at NAB NY 2017, which runs from October 18-20.