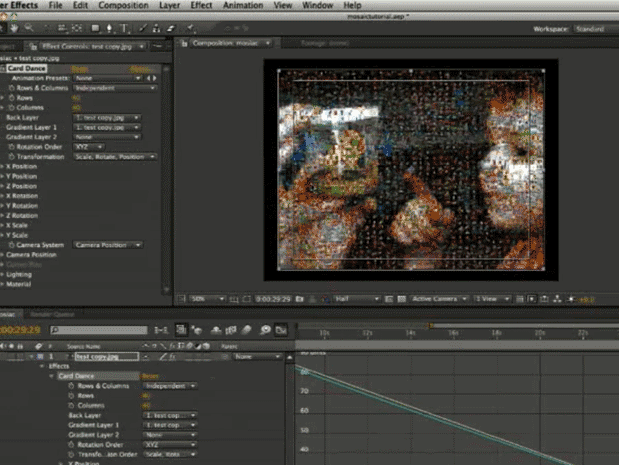 The quick tip for making an animated photo mosaic in After Effects is to generate the mosaic externally and animate with the built-in Card Dance plug-in, which can be a little tricky.

Useful as a launching point is Ayato Fujii's text tutorial, Example.50: Photo Mosaic (and Example 49 animating a mosaic of text). He showed how using software like Andrea Mosaic on Windows and MacOSaiX or MozoDojo, then animating in After Effects using the Card Dance effect. For extra background, see Engadget's How-To: Make your own photo mosaics, which explains the the use of Andrea Mosaic and MacOSaiX.

Using Ayato's method in video is Photo Mosaic Animation Tutorial by Kevin Adams, a clear & basic video explanation of using Card Dance for a mosaic in AE, but without the extras used by Ayato. Also available is Face Mosaic by Rob Hindley, a free After Effects Project on Adobe Exchange that Todd Kopriva dubbed a “clever use of Card Dance and Fractal noise.”

A Total Training video from Brian Maffitt (he created the effect) on Using gradients to control the Card Dance plugin's behavior, might be useful. Another tutorial could also be useful, 21. CARD DANCE EFFECT by MaxAfter. And, the After Effects: Effects A-Z tip series from Motionworks hosted a James Zwadlo demo of the Card Wipe transition, which is easier to use than Card Dance.

Also easier, and a higher-res alternative at 32bpc, is the After Effects script Matrix, which breaks your layer into pieces and animates it for you with a bunch of options. Aside from using Shatter or particles (as in Creating a 3D picture Montage with Trapcode Particular), if you're looking for other types of solutions, you might look at Image grids and auto-storyboard by Chris Zwar, “which takes an After Effects composition (which might contain a single quicktime file) and distributes the frames into a grid. It uses expressions linked to a control layer, so you can animate all of the parameters over time if you want to zoom in and out, or adjust spacing.”

Also useful is the the Images Wall Script for After Effects by Motion Boutique, which distributes the contents of a selected folder onto a grid and provides UI parameters to control transition animation.

For some 3D, see Cinema 4D: Photo mosaic at Motionworks.