AMD showed at NAB 2018 how fast Adobe Premiere Pro CC works when paired with its Radeon Pro SSG graphics. The solution will be available for validated workstations soon. 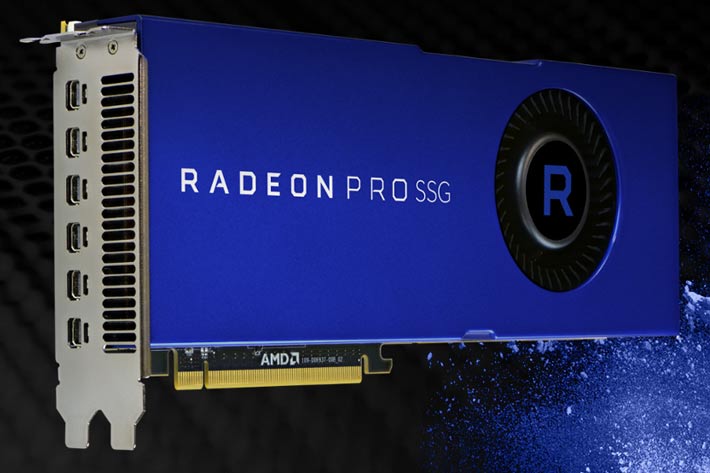 Visitors of the AMD booth at NAB 2018 could see the workflow in action, a new solution for demanding 4K and 8K video workflows that enables seamless editing of popular video formats, accelerating the production process while giving editors unprecedented control of their projects using high-resolution, uncompressed footage.

“The promise of filming in 4K and 8K has always been about removing creative constraints, about providing more creative control with higher-resolution footage. Unfortunately, those creative ambitions have been sidelined by technology limitations that have made 4K and 8K editing practically impossible,” said Ogi Brkic, general manager, professional graphics, Radeon Technologies Group, AMD. “Today, reality catches up to ambition as Adobe Premiere Pro CC and Radeon Pro SSG deliver the high-resolution workflow you’ve always dreamed of, enabling accelerated editing of a wide range of media, letting creators bring their visions to life in uncompressed 8K glory.”

“Adobe Premiere Pro CC has always been the standard bearer for innovation in editing, introducing 4K, 8K and 360-video workflows to enable editors to expand their capabilities and explore their creativity. Today, through our collaboration with AMD, we’re taking high-resolution editing to a new level in Adobe Premiere Pro CC with support for Radeon Pro SSG,” said Sue Skidmore, head of partner relations for Video at Adobe. “Collectively, Adobe Premiere Pro CC and Radeon Pro SSG represents the ideal solution for 4K and 8K workflows, with software and hardware designed to allow your creativity to shine.” 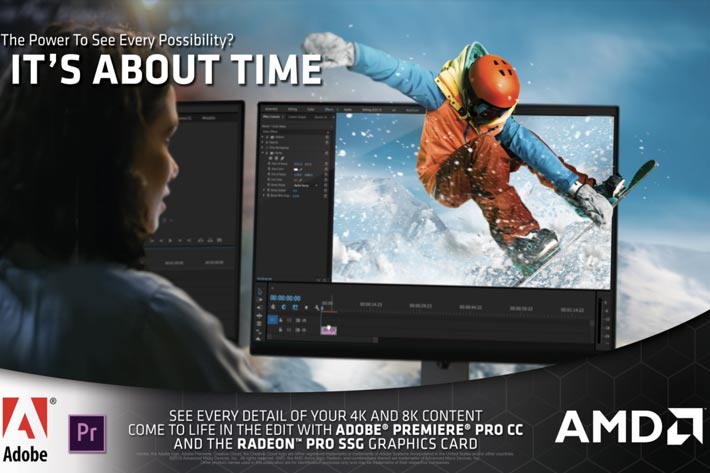 Most productions today film in high resolution – 4K or 8K – to provide the greatest flexibility in post-production; however there has been no effective way to edit multiple streams of that footage at full resolution. Editors have been forced to do their work with proxy files rather than the original high-resolution footage, transcoding to lower resolutions that are more easily managed by most workstations. With the combination of Adobe Premiere Pro CC and Radeon Pro SSG, proxy files are a thing of the past. Editors can now work with multiple streams of 4K or 8K footage at full resolution in an uncompressed format as smoothly as they could with lower quality proxy files. The solution dramatically reduces CPU utilization and eliminates the burden on local memory, allowing edits to footage while preserving the base cache if anything needs to be reverted or changed, and serves as a persistent cache that can be moved from workstation to workstation as needed without having to reload footage.

The Radeon Pro SSG represents, according to to AMD,  a fundamental shift in the science of PC technology, incorporating high-speed, high-capacity NVMe devices onboard the graphics card. It is the first graphics card to offer 2TB of storage specifically for demanding workflows such as high-resolution video, VR, and 360 video stitching. The Radeon Pro SSG harnesses the “Vega” GPU architecture, delivering up to 12.3 TFLOPS of peak single precision compute performance for the most demanding workloads. The card also features 16GB of High-Bandwidth Cache based on the newest, ultra-fast HBM2 Error Correcting Code (ECC) Memory1, and harnesses the revolutionary High Bandwidth Cache Controller (HBCC), the world’s most advanced GPU memory architecture.