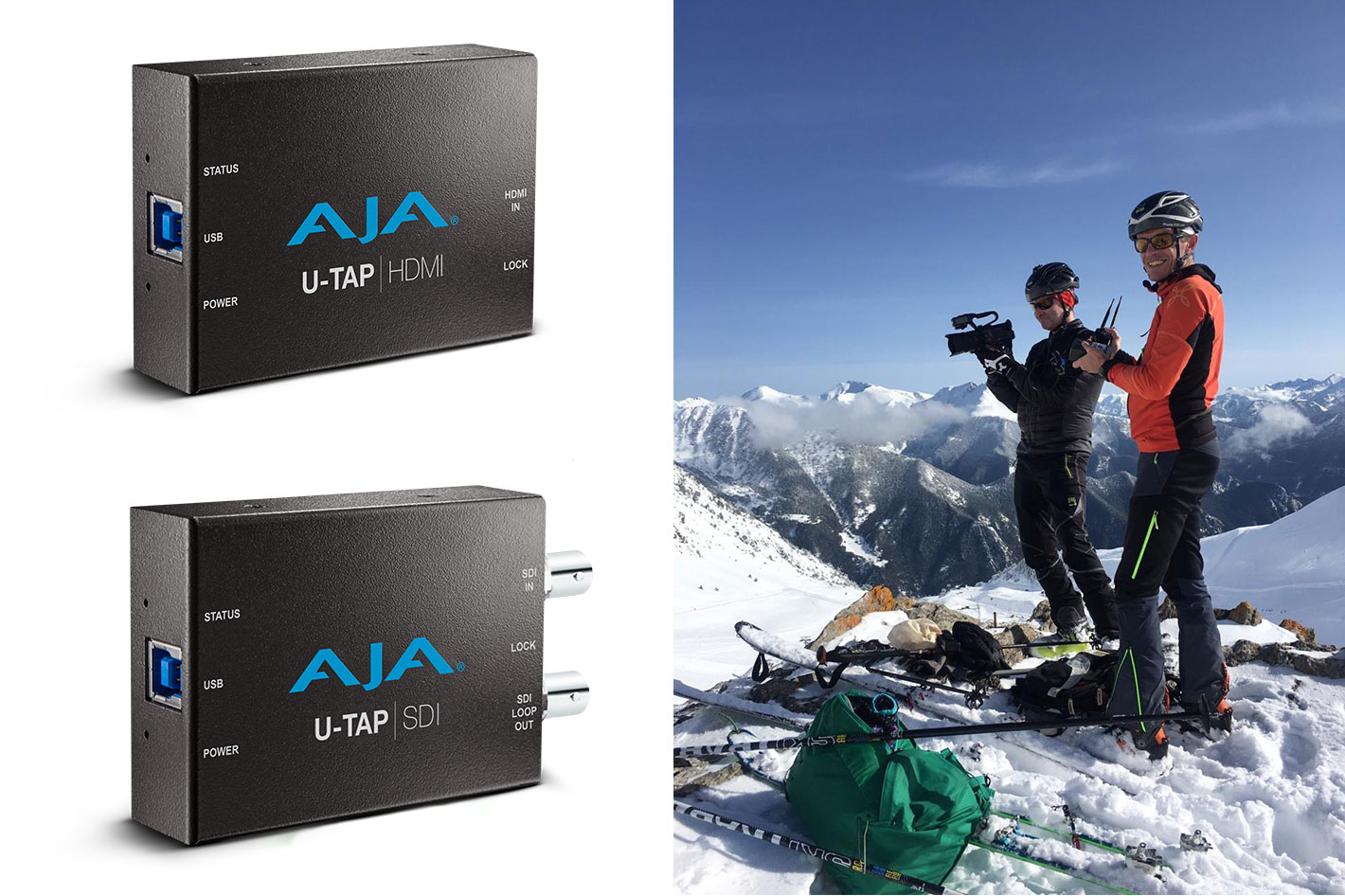 Produce live feeds of a ski mountaineering competition from the top of a mountain range is not an easy task so when Imaginaris was enlisted to cover the two day event, they picked AJA streaming solutions.

Before the pandemic made us all shelter in place competition was high in the Comapedrosa Andorra, a ski mountaineering competition  (skimo) which challenges participants to scale nearly 5,000 feet in elevation from the base of the Pyrenees mountains to the pinnacle of Comapedrosa. The two day event is part of a series of five races held across Europe and Asia – the Skimo World Cup – that are sanctioned by the International Ski Mountaineering Federation (ISMF). 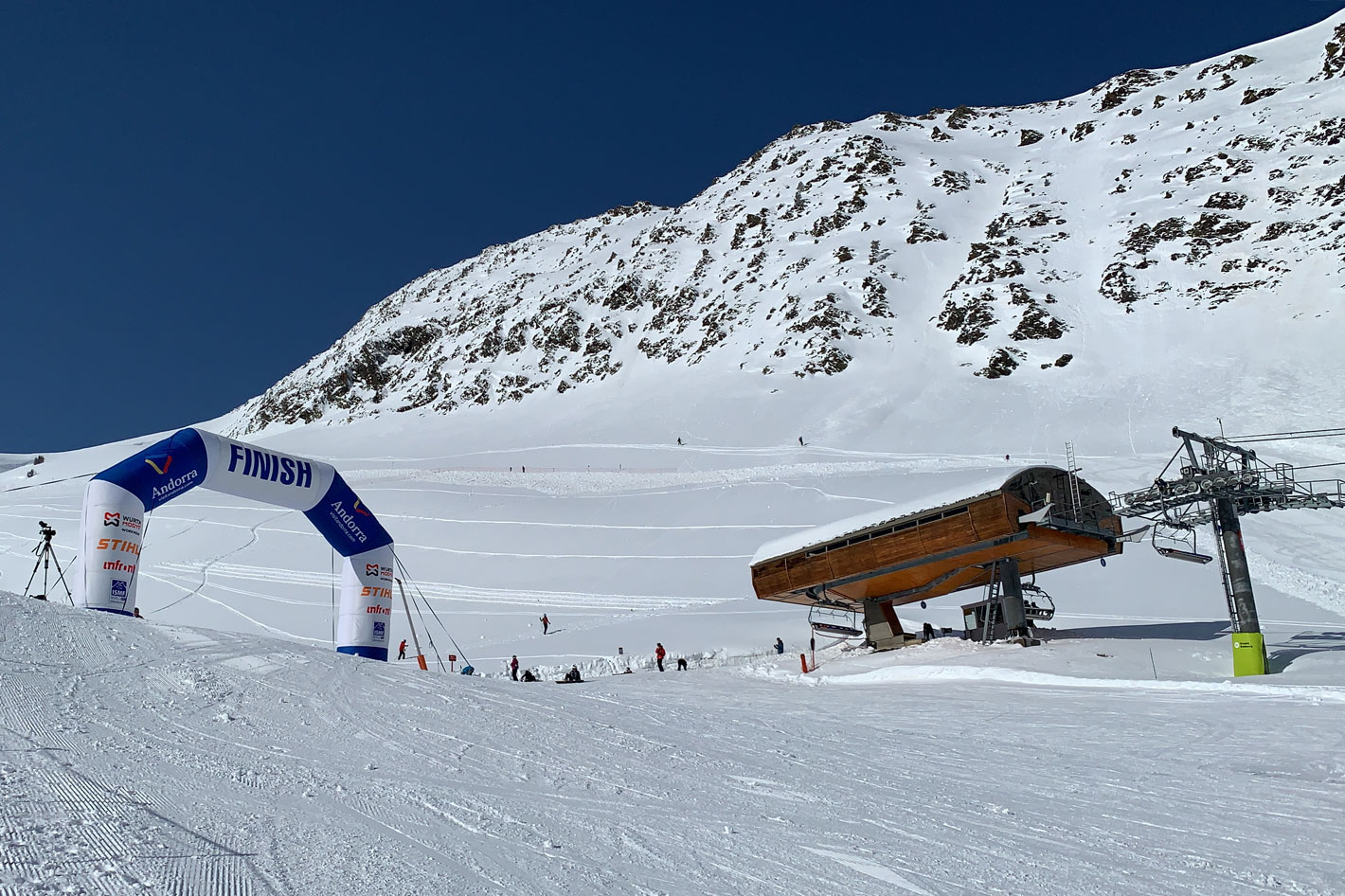 Navigating winter terrain is one of many challenges that (skimo) athletes face as they maneuver through a series of checkpoints while climbing a mountain and descending on skis. Most train and compete in hopes of gaining entrance into the coveted Skimo World Cup. The Comapedrosa Andorra is part of the series, which is followed by fans worldwide, so last January, the Andorran Mountaineering Federation (FAM) enlisted local production company Imaginaris to produce live feeds for on-site and remote spectators. Using an array of AJA solutions, Imaginaris brought all of the action to a large LED display located at the resort at the base of the mountain as well as to Facebook Live. 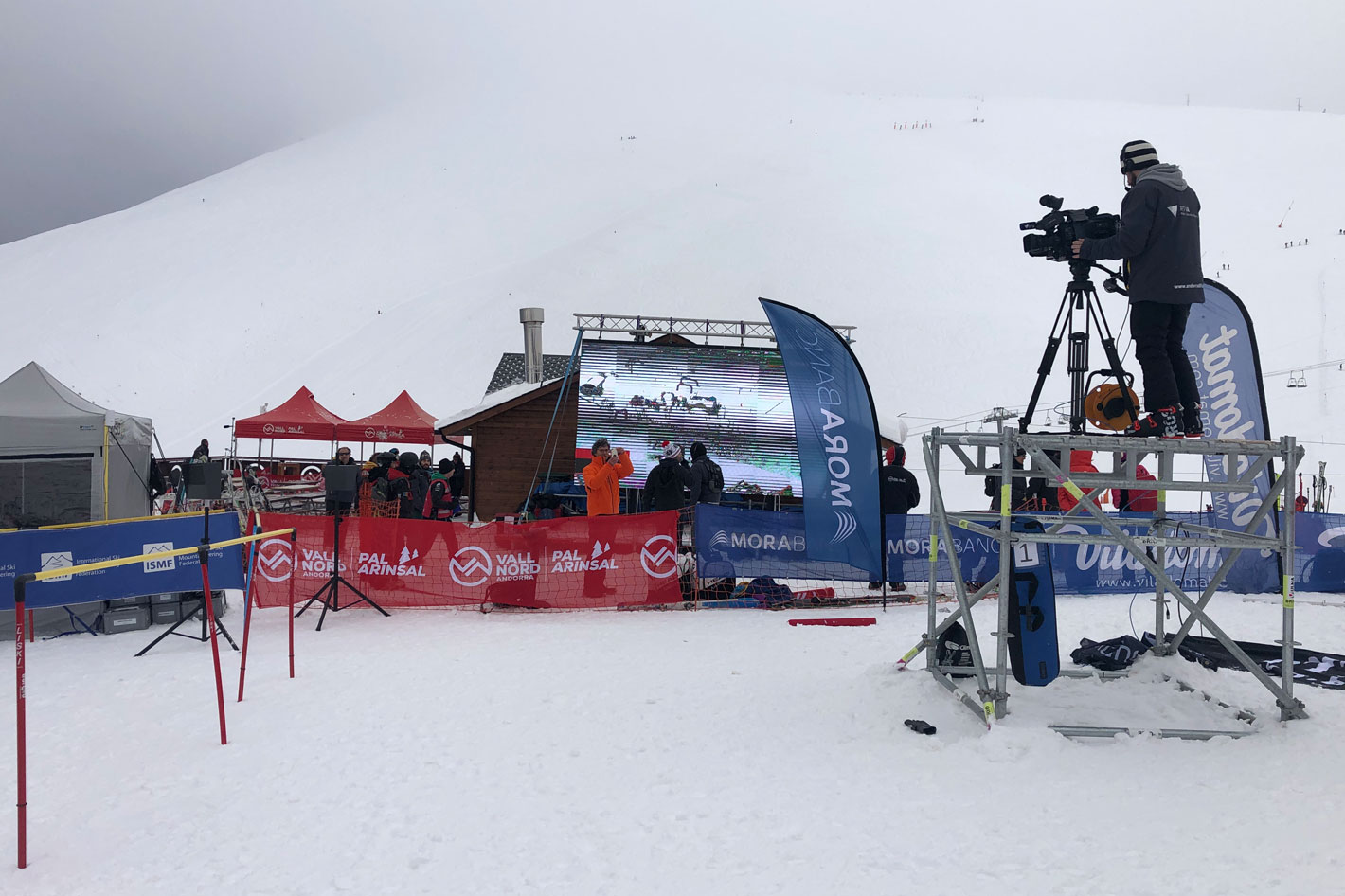 To assemble and define the workflow, Imaginaris turned to 16nou Audiovisuals Andorra for gear recommendations and equipment rental. Comprehensively capturing the contest posed unique and inherent challenges as the camera operators would be climbing and skiing alongside the racers and subjected to unpredictable forces of nature. Given the challenging production environment, Imaginaris also called upon AV production company QuatreSisVuit for an assist.

“We were working at the top of a mountain range between 2,400 and 2,900 meters (7,800 and 8,900 feet) in the middle of winter with weather conditions frequently shifting,” explained Lluis Casabella, owner, Imaginaris. “To pull off a high quality live production with minimal latency that captured multiple angles of the race, we needed equipment that was compact, portable and, most importantly, reliable and durable. AJA products are heavy-duty and easy-to-use, which made them more than ideal.” 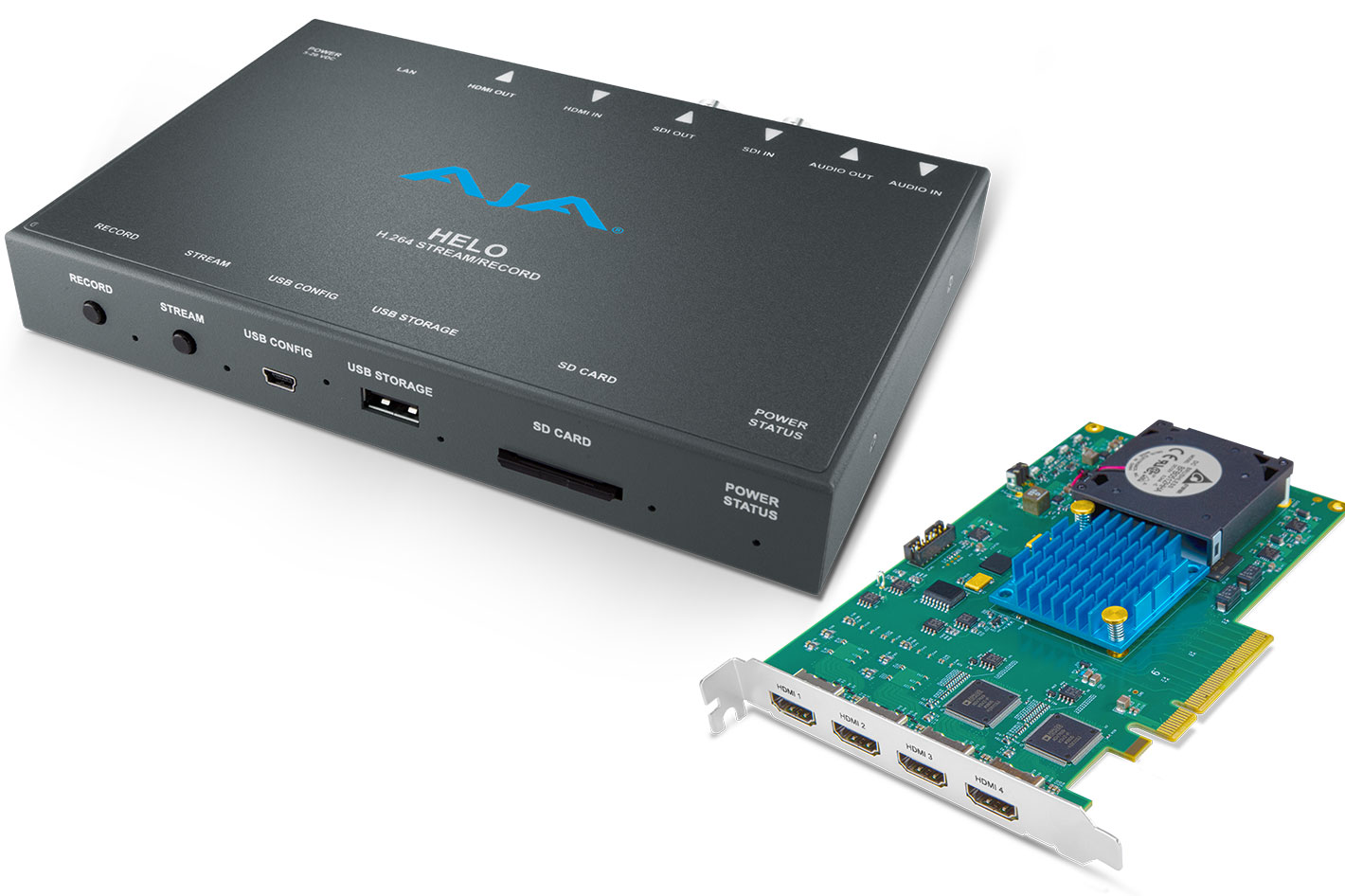 Imaginaris and QuatreSisVuit captured race footage using JVC GY-HM250 cameras, with Canon XF705 cameras also located at the base of the mountain to provide a different perspective. Each camera was connected to one another via DwarfConnection RF links, graphics systems for overlays, and timers. Using an AJA KONA HDMI capture card and AJA U-TAP SDI and U-TAP HDMI USB 3.0-powered capture devices, all of the footage and sources were fed through Telestream Wirecast Pro running on a Mac workstation. The output was then distributed to a Roland switcher to create a sub-mix for the output to a large LED screen set up at the resort and to AJA HELO H.264 streaming and recording devices for streaming to Facebook Live. 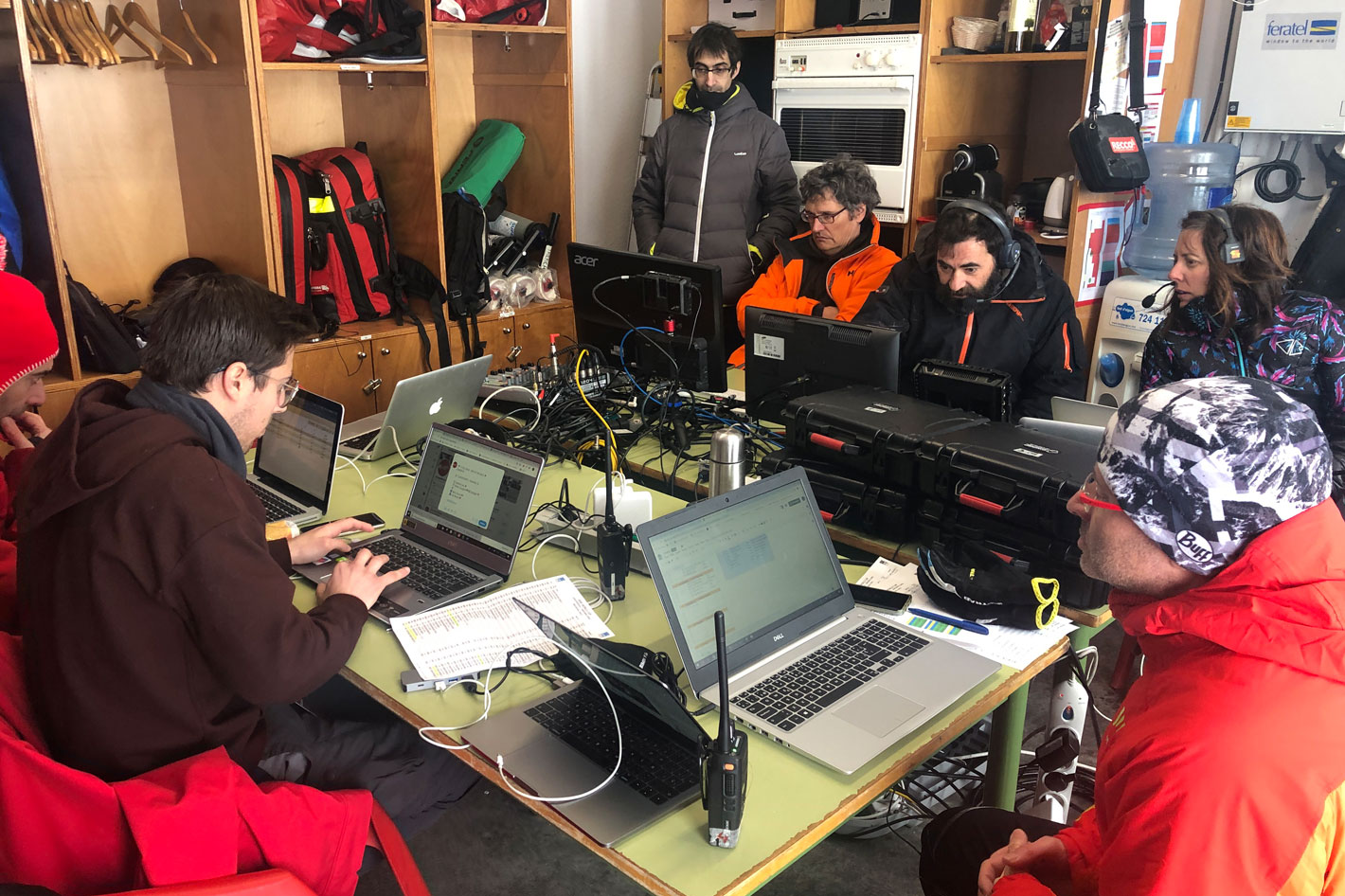 “Live production by nature is unpredictable, and unforeseen occurrences that require last minute changes, especially in a harsh environment like this, can be stressful, but AJA products give us a peace of mind. Their tools are so versatile, that you can almost always find an alternative way to configure or connect your workflow to problem solve. KONA offers high density, low CPU functionality; U-TAP works with almost any computer without requiring drivers and HELO is one of a kind – it minimizes risk by keeping the compression/streaming separate from a computer,” Casabella noted.

“The Start/Finish location for Comapedrosa Andorra 2020 changed three hours prior to the start of the event, and the whole circuit was also altered 24 hours before, not to mention the weather twisted radically, so we saw a lot of electromagnetic disturbance that interfered with our RF equipment. We had little to no concern about it, however, because of our AJA gear. Their products consistently do as they’re expected regardless of the circumstance with unmatched and steadfast performance.”