Too much choice can be confusing, and that is what happens with picture profiles for video. Everybody seems to have one that is “the best”. Sometimes, in fact, the best is to not follow the trend and do things in a simple way. Starting by understanding what profiles are and what they do. 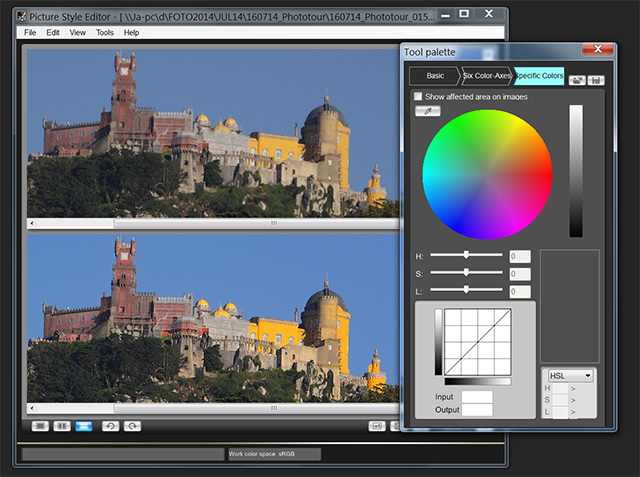 Too much choice can be confusing, and that is what happens with picture profiles for video. Everybody seems to have one that is “the best”. Sometimes, in fact, the best is to not follow the trend and do things in a simple way. Starting by understanding what profiles are and what they do.

Picture profiles, or video profiles, were created to give videographers more choices when it comes to adjusting the video clips coming out of their cameras. Profiles tend, in general terms, to adjust the camera so a certain result is achieved, from greater dynamic range to a particular in-camera look. They should not be used blindly, only because everybody does, but as needed. Sometimes, just shooting with a Neutral profile, built-in camera, is the best choice. Discover why reading this article.

Picture profiles became easier to use with the introduction, by camera manufacturers, of a means to adjust parameters beyond the exposure in the camera, something only possible with digital media. Picture Styles are available in multiple cameras, under different names, as creative styles or picture profiles. Canon cameras,  the brand I am mostly familiar with, offer Picture Styles (since the launch of the EOS 30D model), which are preset yet adjustable parameters that determine how your camera will process and render its images. Picture Styles are applied to JPEG (still) and MOV (video) files during exposure. They are permanent to the extent that the rendering is “baked in” and can not be completely undone. 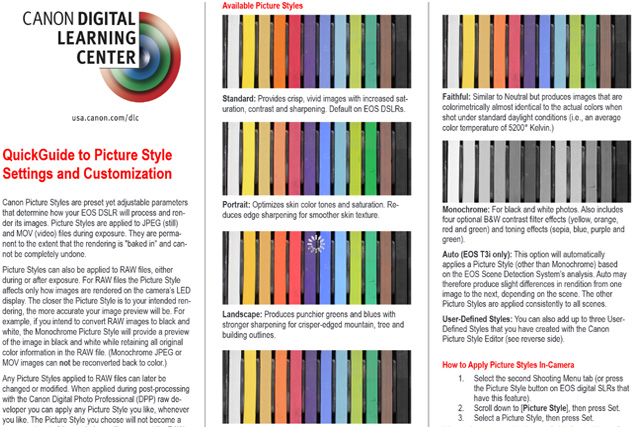 Picture Styles, one can read in Canon information, “can also be applied to RAW files, either during or after exposure. For RAW files the Picture Style affects only how images are rendered on the camera’s LED display. The closer the Picture Style is to your intended rendering, the more accurate your image preview will be. For example, if you intend to convert RAW images to black and white, the Monochrome Picture Style will provide a preview of the image in black and white while retaining all original colour information in the RAW file. (Monochrome JPEG or MOV images can not be reconverted back to colour.)”

Canon’s Picture Style function brings together the various settings for image processing parameters and combines them into one easy-to-use point of access for the control of sharpness, contrast, colour tone and saturation. Picture Style makes it simple for users to get optimum image quality by making a selection – more or less like selecting a particular film type in the past on the basis of colour characteristics, contrast and sharpness. To know more about Picture Styles read the Picture Style Quick Guide, from Canon.

Canon did, in fact, create a simple interface for their Picture Style, a function that opens the door to the use of profiles for video, something that modern DSLR do. But Canon did not create a specific profile, or Picture Style, for video, so someone else had to do it. And it took until 2011 for what at the time Vincent Laforet considered “might be the best ‘picture style’ or curve to use with the Canon 5D MKII” to appear. http://blog.vincentlaforet.com/2011/04/29/technicolor-cinestyle-profile-available-for-canon-5dmkii/ 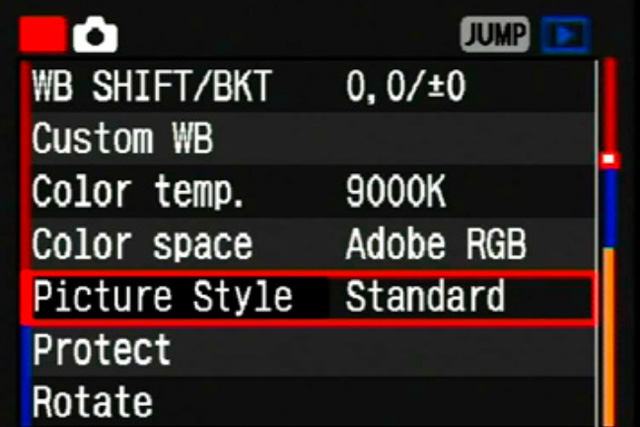 Developed by Technicolor, teaming with Canon engineering as well as ASC Directors of Photography, the CineStyle,  distributed freely, was immediately put to test by multiple videographers. Technicolor said they were responding to industry demand from cinematographers for enhanced flexibility in capturing images from digital cameras. Furthermore, although the profile was meant to the EOS 5D MKII, it could be applied to different EOS cameras, even the entry level models. But the response was not unanimous, and some, like Jorgen Escher even claimed in a post, in 2011, that “Canon users watch out! Technicolor Cinestyle profile steals your DR!”

The truth is that no picture profile will ever satisfy different users, with different needs or ways to see colour. Soon there were more alternatives available in terms of picture profiles, making things even more confusing for people just starting to use their DSLR for video. The confusion goes on even today, starting with the classic “law” many people will hear when they start: “you need to get a picture profile for your videos to look professional”.

Let me tell you one thing: you don’t. In fact, if you are not sure about the reasons why you should use a specific picture profile for video, you’ll probably get better results by not using it. What this means is that the best thing you can do, sometimes, is to stick to the profiles you’ve available in your camera, or use a neutral profile as a starting point. 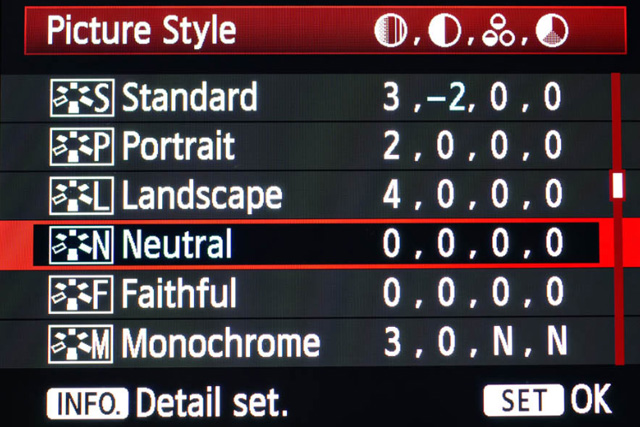 While it is true that picture profiles (and Picture Styles) have taken DSLRs to a new level when it comes to the control users have over the final look of their photos or videos, you do not need to use a specific picture profile just because someone tells you you should. Photography and Video are creative arts, so the freedom to explore on your own is or should be part of the philosophy. This said, you should try some of the popular profiles available for video, both to understand how they work, and also to be able to decide if you want to use any of them.

Here is a list of some of the profiles available, with links to get them. I’ve decided to only mention those available for FREE. If you want to explore further you can always go for the paid versions. Google for the term and you’ll find enough for many days of exploration. Here is a small choice to get you started:

Technicolor CineStyle – The picture profile that started it all for Canon DSLRs resulted of a joint venture between Canon and Technicolor. The info on the website says that with the PP you can “Harness the full potential of your DSLR Camera”,  boost the dynamic range in your camera, “create a unique Hollywood feel to your productions that matches the look and color capabilities of much more expensive equipment and processes.”, and also “Capture clips that can easily be color graded to match different cinematic styles from various sources and genres, including 35mm film.” Besides you’re able to “exploit a far greater dynamic color range when shooting in difficult lighting conditions” and “seamlessly intercut DSLR-based footage with content from other cinema-quality cameras such as RED, ARRI ALEXA, SONY and 35mm film.”

Marvels Cine Picture Style v3. 4 –  Preferred by some, the final version of this PP uses a slightly altered curve from the initial release, made to preserve luminance linearity in the 65-75% (skin tone) range. It further uses the internal Canon Neutral style instead of the Standard style, but this can be altered from the selected style settings menu in the camera.

Similaar Flaat Family -Flaat is a suite of picture styles for Canon and Nikon DSLRs and Sony NEX. The author states that “Flaat aims to deliver less noise in the final (graded) images than Cinestyle.” The series offers PPs based on both the Neutral and Portrait Pictures Styles from Canon, which, in fact, are the base used by many creators of picture profiles for video. Visit the website for Flaat to know more.

Although multiple choices of PPs appeared in the market, Canon had no PP of their own until 2013, when they launched their picture profile for video. Created following direct feedback from video enthusiasts, the new Picture Style, called Video Camera X–series-look, enables users to capture EOS Movie footage with lower contrast levels, allowing for easier colour grading during post production processes.

Similar to the profile available in Canon’s range of X-series camcorders, the new Picture Style works, continues the press-release, “by lowering colour saturation levels and contrast during filming. This makes it ideal for videographers during post production grading processes, especially if complementing with pre-existing footage shot with Canon’s X-series models, or alternatively for those who instantly want to add atmosphere to Full HD movies. In addition, the new Picture Style can also be applied to still images captured in RAW or JPEG formats.” 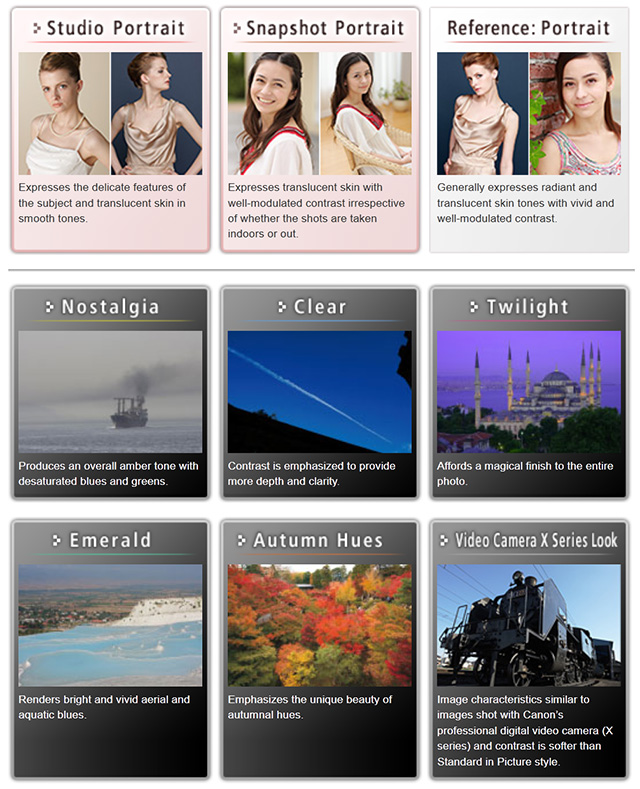 In fact, the new Picture Style is just part of a bigger collection of Picture Styles Canon includes on their cameras, or can be downloaded from the web pages dedicated to Picture Styles. There you’ll discover multiple Picture Styles that you can try. Although they were conceived for photography, nothing stops you from trying them on your videos. There are two options for portrait – Snapshots and Studio – and then profiles for Twilight, Emerald, Autumn Hues, Nostalgia, Clear. Canon even offers a Picture Style Editor allowing you to edit and create your own Picture Styles. One thing to remember, though, as Canon points out: “The provided Picture Style files are intended to be effective in a very limited number of scenes. Consequently, they do not guarantee that images can always be generated as users expect. In addition, if they are used to shoot casual scenes, they may cause unnatural images to be generated. We will recommend photographing with RAW.” This means that if you are shooting video with these profiles… you will be stuck with the results, so beware before using them in an important shoot. But do give them a try!

Now that we’ve a clearer image of the world of picture profiles, maybe it is time to state, again, that sometimes it is better to not use a popular picture profile at all. Or to use what you’ve available in your camera, already.  Does this mean you should stick to Neutral or Faithfull for the rest of your life? No! In fact, you should try different picture styles – those in your camera – and change parameters, to create various looks. With digital it is easy to explore in order to achieve a specific look, be it a Nostalgia style or the appearance of an old Kodachrome film. It all depends on what you want and how effectively it matches the story you want to tell in video. 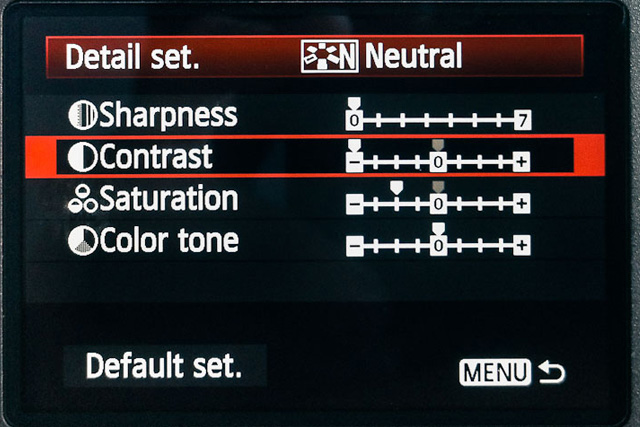 You do not need to be a rocket scientist to achieve a picture profile that works. Things like the Prolost Flat can easily be set on your camera. Start with the Neutral Picture Style, set Sharpness to zero—all the way to the left, set Contrast all the way to the left and set Saturation two notches to the left. That’s it. That’s Prolost Flat – the Picture Style of choice for Vincent Laforet, Philip Bloom, Jason Wingrove, and many others, stated the author in 2012. It will probably still work today. No downloads, no messing with difficult concepts. Just create your own profile in the camera and try it!