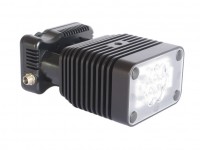 I first read about Zylight LED lighting systems in the summer of 2007. At NAB 2008 FreshDV made a point to stop by their booth and get a demo of the lighting technology, and we were duly impressed. You can view that video at the end of this article. Shortly after returning from NAB, a friend of mine ordered one of the Zylight systems. We had been using some Swit LED on-camera lights for certain events, but were open to other possibilities. At NAB we were really impressed with the configurability the Zylight system offers…dimmable output, instant color shift without using physical filters or gels, Daylight and Tungsten presets, and the ability to network a number of Zylights together for centralized control. So after NAB my buddy ordered a Z50, and when it arrived was so impressed with the build quality that he ordered a Z90 model almost immediately.

I recently had the opportunity to work with him and use both Zylight models at a large wedding event where he needed additional shooters. The reception location had a wide dancefloor area about 20′ x 30′. It was reasonably well-lit by large lights with plenty of output. However, from our event experience we knew to expect this lighting to change drastically over the course of the night. So we attached the Z90 light to a light stand about 10′ in the air. The Zylights have standard 1/4-20 screw taps on the top and bottom, so it was a simple matter to attach it to a miniature tripod head so allow pan tilt adjustments at the top of the light stand. After adjusting the optimal angle and throw of the light, we put it in Z-link mode, which allows it to be controlled wirelessly by the Z50 (or Zylight’s standalone wireless controller unit).

The Z50 was mounted directly on a monopod, which the lighting assistant would hold above and slightly-off to the side camera while shooting. This enabled us to keep a nice, controlled level of light directly in the vicinity of the camera(s) on the dancefloor, with an additional light on a stand providing overall fill and a nice kick to play off at times. The lighting assistant was able to dim and color gel the Z50 on the fly, which in turn reflected those changes wirelessly on the stand-mounted Z90 light. We were particularly impressed with the color gel features of the lights. It is trivial to make very minor adjustments to the color temperature and matching the ambient lighting is a dream. It made our lights appear to be less jarring to the people dancing, and mixed perfectly on camera. Lighting color changes can be saved on the fly as one of the two user presets and recalled later.

Prior to the reception event, we did some testing and determined that both lights would probably benefit from a little additional diffusion. We gaff-taped two small squares of Rosco diffusion film over the Z90, and a single layer over the Z50. This was pretty close to optimal, and helped to soften the output even more. The result is a light that wraps quite nicely around the subject, and doesn’t hurt the eyes when aimed directly at them (when properly dimmed). The output of the Z90 was cut a bit by this double layer of diffusion, but it still enabled us to nicely fill light a 12′ square area. Output for the Z90 and Z50 at two meters is rated by the manufacturere at 143 and 33 lux, respectively. The Z90 is said to be equivalent to a 60-70 watt bulb. We have not tested that specifically, but the numbers seem to jive with reality. These are powerful little lights.

Battery and power options for the Zylights are extensive, with cords and adapters available for a wide variety of cameras and batteries (like D-tap, XLR 4-pin, cigarette lighter adapter etc). The system will take basically any 6.5v – 12v source. We powered the Z90 with a 2-hour corded LIon battery pack that can be clipped to a belt, camera, or light stand. The Z50 worked nicely with a Sony L-Series battery in a Swit clip adapter (taken from an S2000 series Swit LED light). I also understand that Swit has a new line of Sony-compatible L-series batteries with an adapter jack directly in the battery. With the appropriate cable I imagine that you could run a Zylight using one of those. Zylight also offers an accessory attachment that allows you to easily attach a set of standard barndoors or snoot.

The Z90 model is slightly larger in size and weight to the Z50. It’s layout is a little more user-friendly, with more spacing between the buttons and multiple displays that provide feedback on the mode you are in, as well as the specific light temperature you have the light set to. The Z50 offers the same level of control, but without any display to provide feedback. Lighting temperature can’t be matched by number, only by eyeballing the scene. Buttons on the Z50 are closer together, and the color-shift knob is integrated with the dimmer knob, making it a little less easy to use than the Z90. Both models offer all three modes…White, Color, and Gel. In color mode the temperature can be varied from 2500 to 9000 degrees Kelvin. There is no color shift while dimming, and the output remains constant no matter what color or temperature you select. Gel mode allows you to quickly add steps of color, green for instance, to handle flourescent or odd lighting situations.

In conclusion, the Zylight systems are a quality, robust solution. They offer a host of features and are well-suited for event shooters, and would be equally at home with simple interview or on-location lighting. The only real complaint I have at this point is the price. MSRP on the Z90 and Z50 models are $875 and $750, respectively. You can find more info at zylight.com.

The following video is from FreshDV’s coverage of NAB 2008, and was shot at the Zylight booth. Check it out for a short overview of the lighting systems.