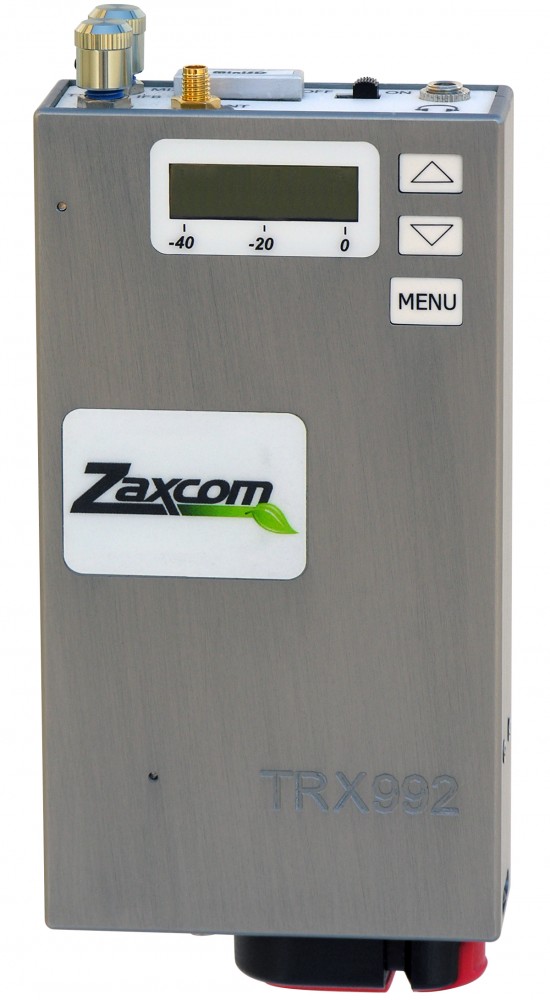 Zaxcom’s TRX992 features patent-pending internal recording that backs up transmissions to guard against lost audio files. Users can record up to 24 hours of audio to a removable mini or micro SD card using the TRX992. The system features a user-selectable power output ranging from 10 mW to 100 mW. The audio dynamic range is 106 dB, making the TRX992 sound like a hard-wired microphone without any of the typical FM audio distortion problems.

The TRX992 can be used for critical monitoring applications, with a 2.4-GHz digital monitor return receiver that relays return audio, time code reference, and RF remote control commands. Alternatively, TRX992 users can elect to transmit high-resolution IFB audio instead of time code and remote control signals. As a true-diversity receiver, the TRX992 eliminates concerns over audio drop-outs, which are common to non-diversity monitor receiver systems. The system’s internal monitor mixer allows users to mix transmitted audio and a monitor return together, controlled by a pan pot on the top of the unit. The TRX992 also features mic/line level input and a balanced XLR input with 48-V phantom power.

“The new TRX992 system offers a number of enhancements over its predecessor, the TRX990, and provides a replacement for the Batman-style utility belt currently used in almost every television and film production worldwide,” said Glenn Sanders, Zaxcom’s president. “The digital wireless audio technology featured in all of our systems, including the TRX992, offers users audio quality that rivals a hard-wired system and is vastly superior to any analog or digital hybrid wireless solution. In addition, the TRX992 is a very rugged unit, designed from a single block of aluminum, making it suitable for use in a wide range of environments.”

The TRX992 system is shipping to customers in February 2009. Learn more about Zaxcom’s full line of audio systems at www.zaxcom.com.