One of the most versatile documentary cameras used to capture wildlife 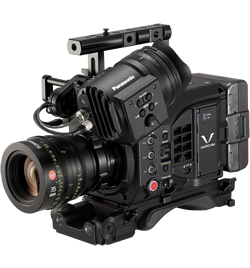 Braving the challenging weather and Kodiak brown bears of Alaska, Director of Photography Tom Trainor served as Director of Photography/Kodiak on the new Animal Planet documentary series, Into Alaska, shooting with his VariCam LT 4K cinema camera. Season one of the series, which showcases the wildlife inhabiting Alaska’s national refuges and the men and women who protect them, is currently in rotation on the cable channel (https://www.animalplanet.com/tv-shows/into-alaska/).

Trainor, a veteran of many documentary shoots in Alaska, had previously owned the AG-DVX100 and AG-HVX200 handhelds, and is a fan of Panasonic’s colorimetry. “Given how much work I do in limited daylight in Alaska, I was immediately sold on the VariCam LT’s Dual Native 800/5000 ISOs,” he said. The DP described the location work on the series’ premiere episode, “Release the Eagle,” which follows biologist Bill Leacock into the heart of bear country on the Kodiak National Wildlife Refuge.  “We were working on the southern tip of Kodiak Island (the wildlife refuge takes up about 2/3 of the island) during the summer,” Trainor recounted. “There was no internet, plenty of pounding rain and long hikes over tundra. At one point, I fell down with the LT: no problems.” 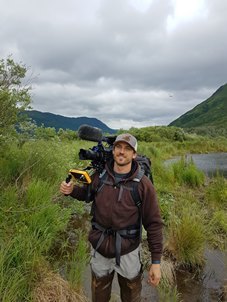 “I love the ergonomics of the camera,” he continued. “I recently did a shoot in frigid, -7° F. weather. The LT’s big menu buttons are great—I never had to take my gloves off.” Trainor shot Into Alaska in 4K AVC-Intra 4:2:2, using EF mount Sigma 18-35mm and 70-200mm zoom lenses. “The camera’s color science is spectacular—the V-Log feature gives us so much latitude to play with in post,” Trainor said. “The VariCam LT is definitely a lot a camera for its price point.”

Trainor also recently used the VariCam LT to shoot US6: The Homecoming, a series profiling the Indian-American members of India’s national cricket team. That series is airing on the Hotstar streaming platform. View DP Trainor’s VariCam LT projects at http://www.vimeo.com/ashlarmedia.

About the VariCam LT

The VariCam LT camcorder inherits the same super 35mm sensor and superb imaging capabilities that distinguish the award-winning VariCam 35, but with significant reductions in size, weight and price. Incorporating this identical imaging “DNA” in a more compact rendition, the VariCam LT delivers 14+ stops of dynamic range with V-Log, and the esteemed cinematic VariCam image quality and color science, as well as the VariCam 35’s breakout innovation, dual native ISOs of 800/5000. Weighing just under six pounds and having a superior capability to similar sized cameras, the VariCam LT is the ideal camera for handheld, SteadiCam, jib, crane, drone, gimbal and overall cinema verité work. The VariCam LT offers a host of new features including an EF lens mount, hot-swappable batteries, IR shooting capability, a 23.98 PsF output, cinema style file naming, and image presets such as scene files.