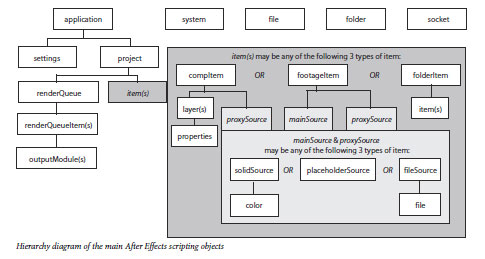 A new After Effects Scripting Guide was released on the AE team blog this week in scripting changes in After Effects CS6, plus new scripting guide. A casual glance may reinforce the notion that the whole affair is only for the cognoscenti.

Scripting itself may be for the cognoscenti, but scripts themselves are easy to run and quite handy in extending features and automating repetitive or complex tasks. For a long time scripts were underutilized, at least until experts spread knowledge through the forums, features developed, Script UI panels appeared, and Lloyd Alvarez opened AE Scripts as a hub that could help support script authors. As Mark Christiansen has noted, users should look at AE scripts as if they were plug-ins and Adobe could market them as huge new feature set by better exposing them, perhaps with better UI.

Easy to access information on scripting is no longer just bound in books, like the articles by Dan Ebberts and Jeff Almasol, but can also be found in video tutorials by David Torno, Jesse Toula, Dylan Winter, and Lloyd Alvarez.

There are a number of learning and script resources and some very good introductions to scripts and how they differ from live expressions, etc.:

(and other editions) by Mark Christiansen includes a very informative appendix on scripting by Adobe engineer Jeff Almasol. Jeff wrote most of the Scripting Guide, and has a section on scripting fundamentals and many free AE scripts on his website Redefinery.

MotionScript is Dan Ebberts's resource for AE scripting and expressions. See also Dan Ebberts' chapter on scripting in Creating Motion Graphics With After Effects by Trish and Chris Meyer, which was available for download at PVC in CMG Hidden Gems: Chapter 37B and 37C – Expressions and Scripting Bonus Chapters. Dan can often be found on the AE Creative Cow forum.

The After Effects ExtendScript Training video series by David Torno is available free at PVC. This 2013 series seems to be the deepest as well as most recent resource for creating AE scripts, except for the fxPhd course by Lloyd Alvarez (see below).


Lloyd Alvarez, creator of the essential script resource AE Scripts, has had an ongoing course teaching an Introduction to After Effects Scripting at fxphd. That class is available from January 2014 on AEscripts.com, with forums discussions there too; see intro video below). Lloyd introduced concepts in AENY presents Lloyd Alvarez's After Effects Scripting Presentation:

Lloyd Alvarez provides a valuable collection of useful scripts on the amazing AE Scripts.com website, which made access and use of AE scripts much easier. Lloyd also shares tips like Attention Freelancers: How to run .jsxbin scripts if you don't have access to the ScriptUI Panels folder.

Jeff Almasol, a member of the AE team, provides a semi-official collection of useful scripts, Additional Scripts for After Effects CS4-CS6, and many more on his website Redefinery. Cool scripts by Jeff are also in The DV Rebel's Guide by Stu Maschwitz. He also posted Effect Match Names Reference (for AE CC (12.1)).

Mark Christiansen's sometime series After Effects Script of the Week, which takes in-depth looks at specific scripts, can be found on ProVideo Coalition.

What's your favourite AE Script? by Tim Clapham is an exposition of his experience and feedback from a Twitter survey.

Top 10 After Effects Scripts for Workflow Enhancement 2011 Edition by Sebastien Perier, is based on the “daily use of scripts, and in no way is a 'best-of' list.”

Creative Dojo has scripts for sale on a sliding scale, and an intro to scripting.

At Mamoworld, Mathias Möhl provides several useful tools-including MochaImport, KeyTweak, and Tracker2Mask-as well as video tutorials explaining the use of his scripts and expressions. His old website, AExtensions, is no longer available.

The AE Enhancers forum played a key role in advancements in knowledge and provides example scripts, expressions, and animation presets in After Effects. There's another forum, After Effects Scripting, as well as the After Effects Exchange, on the Adobe website.

As mentioned, Lloyd Alvarez has had a regular course teaching an Introduction to After Effects Scripting at fxphd. Most of the scripts at Lloyd's AE Scripts website come with video tutorials.

BEGINNER TUTORIAL : Add Slider/Expression to a comp, by Disciple and Paul Tuersley at the AE Enhancers forum, shares the various steps to create a script that fulfilled a simple but real-world need.

Introduction to Writing Scripts is a 5-part video series on expressions and scripting by Frederik Steinmetz on AEtuts.

“Part 1 will go over the basic JavaScript concepts that will be needed to create your first script. This tutorial will not turn you into an expert, but it will give you a starting point and a basic understanding of the capabilities of scripts and how they can help improve your work-flow. In part 2 of Scripting for After Effects, we'll go through some After Effects specific concepts so that we can create a simple, but functional script. Learn to select layers and compositions, find layer properties, create undo groups and functions and much more.”

Also interesting: Khan Academy posted Advanced JS: Natural Simulations, a course based on the natureofcode.com — an online and print book about programming natural simulations using the Java version of ProcessingJS.

Charles Rowland posted Scripting Resources for Motion Graphics, which collects resources for scripting in motion graphics. It's not as comprehensive on AE as this article, but extends beyond to Javascript and expressions and scripting resources for major 3D programs.