Keying hair (and more) without a greenscreen 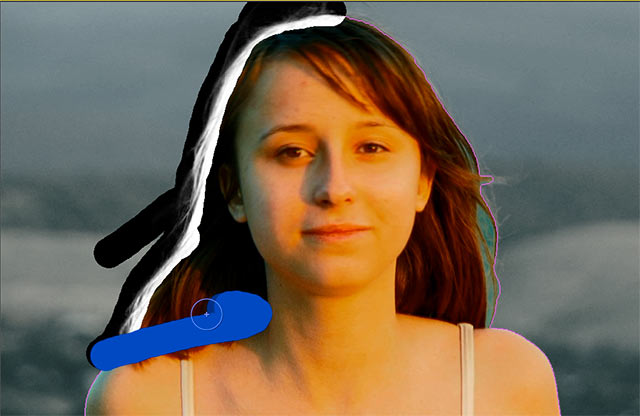 Every time After Effects or any other major tool you use is updated, you go through a decision process of whether or not to buy the upgrade. Adobe has upped the ante this cycle by announcing the end of permanent licenses for most of their software; from now on, their major apps are only available through their Creative Cloud subscription model. We’ve avoided publicly joining the Creative Cloud debate (we happen to actually be subscribers, and we’re very happy – while also realizing it may not work for everyone), but in the meantime, we wanted to share with you more about some of the significant new features in the Creative Cloud version of After Effects so you can be better informed about your upgrade decision when the June 17 release date rolls around.

Before you use Refine Edge, you first have to use Roto Brush to create a “binary” (on/off, or foreground/background) matte for the shot. This is what Refine Edge then refines. Here us a quick overview on the general workflow, including making your initial Refine Edge stroke that calculates a finer-detailed alpha channel (including partial transparency) along the Roto Brush’s segmentation boundary:

After you’ve set up your initial Refine Edge strokes, you need to help After Effects propagate it across adjacent frames. After Effects does a pretty good job of doing this automatically based on the Roto Brush segmentation boundary, but occasionally it will need help. And in those cases where Refine Edge still can’t automatically discern between foreground and background, you can use other tools such as Paint to perform touch-ups:

After you’ve created the necessary Refine Edge brush strokes, there are a handful of parameters you can tweak to fine-tune the transparency Refine Edge creates. We touch on those here, including our favorite combination of Contrast and Shift Edge:

The three movies above were created in March (disclosure: Adobe gives us access to pre-release software in exchange for testing and feedback), and were based on our initial experimentations with Refine Edge. Since then we have gained much more experience using it, and may create some advanced movies later this year that show you how to get the best out of it. In the meantime, it’s already proven to be very useful tool.