Go beyond the defaults to get more interesting looks. 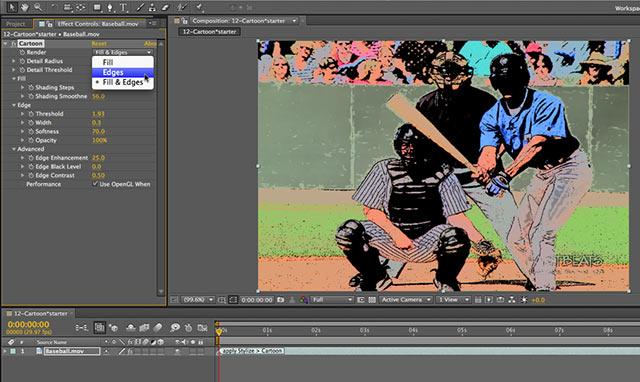 As we’ve mentioned before, we updated our After Effects Apprentice video courses last year. As part of adding and reorganizing material, some movies got cut. But we hate to see anything go to waste, so we’re reposting them here for free – including a three-movie set on using the Cartoon effect.

The movie below briefly discusses the difference between Cartoon and the After Effects Puppet tool (covered in the Apprentice lesson Paint, Roto, and Puppet, which Cartoon used to be part of), as well as how Cartoon processes footage under the hood. It then dives Cartoon’s parameters, including suggested settings.

For example, we personally prefer lowering the Shading Steps to get a more obviously posterized look, and adjust Shading Smoothness to decide how much of a “photocopy” look we want. But even more important is playing with the Edge parameters: The default settings look like a felt-tip pen was used to outline details in the image; we personally prefer reducing the Width and playing with Softness to get more of a pencil-line look.

Of course, this is all subjective; the main point is becoming familiar with what  parameters do, and to feel comfortable adjusting them:

By the way, if you’re the type of person who prefers to read rather than watch a video, we also wrote an article for Artbeats.com on using Cartoon – you can download a PDF of it here.

In the next installment, we’ll share a few ideas of how to optimize Cartoon by combining it with other effects, as well as change the frame rate to create a feel more akin to traditional cell animation.