Whether you’re an AAA powerhouse or an indie startup, with Unreal Engine 5, you’ll be able to achieve movie-quality photorealism. Epic Games just released a first build so everyone can try the software. 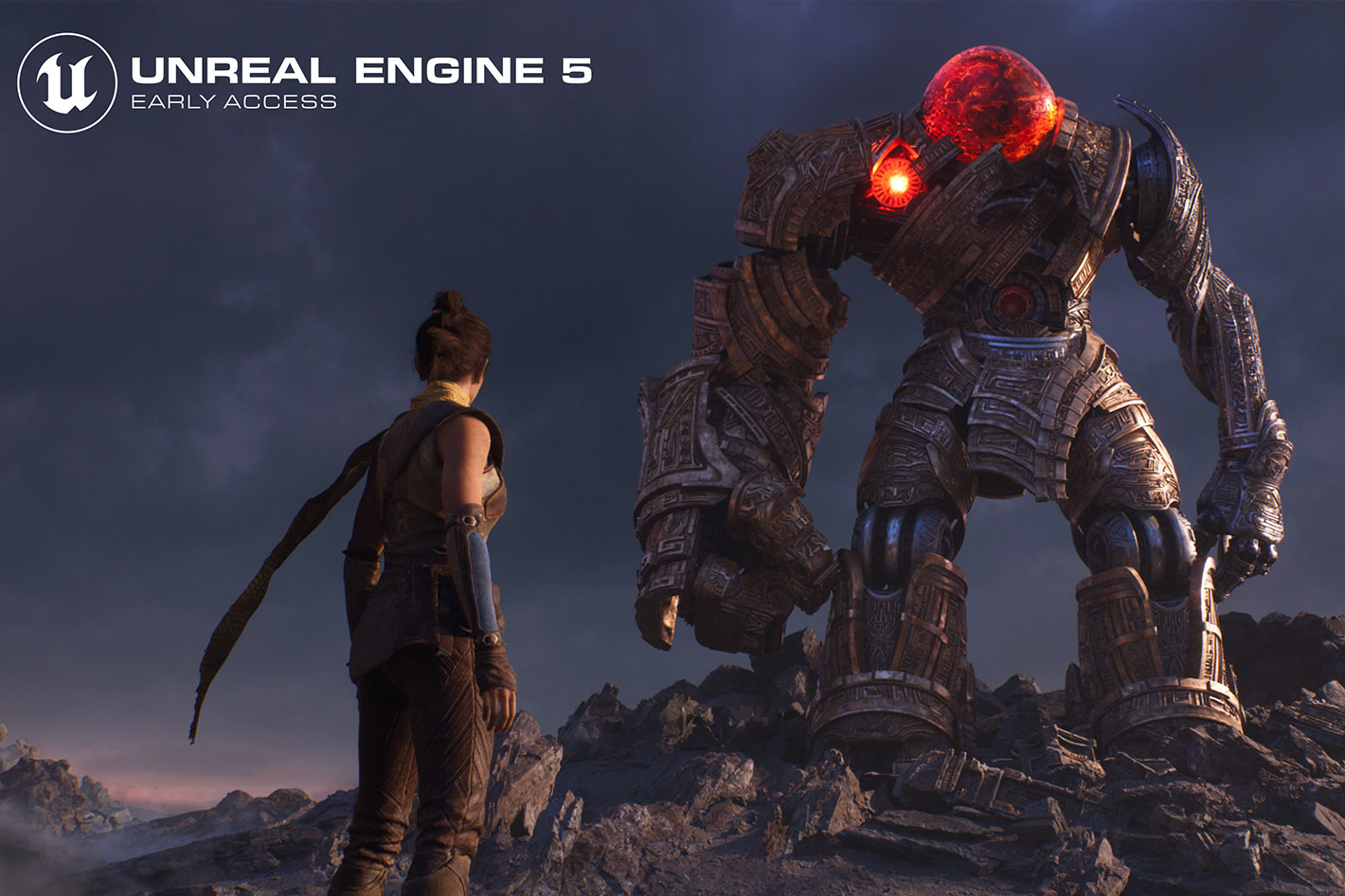 Unreal Engine 5, which is expected to ship in early 2022, will empower creators across all industries to deliver stunning real-time content and experiences. A first early access build is available now.

After many months revealing bits of the new version, Epic Games announced that Unreal Engine 5 is now available in Early Access. This first public version of the software goes back to its roots, as it is built for game developers who like to live on the bleeding edge to start testing features and prototyping their next games. So, if you’re a filmmaker, this is not yet for you, unless you’re curious to see how the tools, many of which are shared, work in this new version.

This Early Access build of Unreal Engine 5 offers developers the opportunity to start testing features and prototyping their upcoming games. Unreal Engine 5 will deliver the freedom, fidelity, and flexibility to create next-generation games that will blow players’ minds. Groundbreaking new features such as Nanite and Lumen provide a generational leap in visual fidelity, while the new World Partition system enables the creation of expansive worlds with scalable content. As always, Epic Games says, “we’re committed to battle-testing the engine in-house, as we prepare to ship Fortnite on UE5 across all platforms down the line.”

Unreal Engine 5 is expected to ship in early 2022, and will empower creators across all industries to deliver stunning real-time content and experiences. As noted above, the Early Access build has only been tested on game development workflows and offers a chance for game developers to go hands-on with some of our most exciting new features. Additional features and other improvements for all industries will be part of the full Unreal Engine 5.0 release in early 2022. 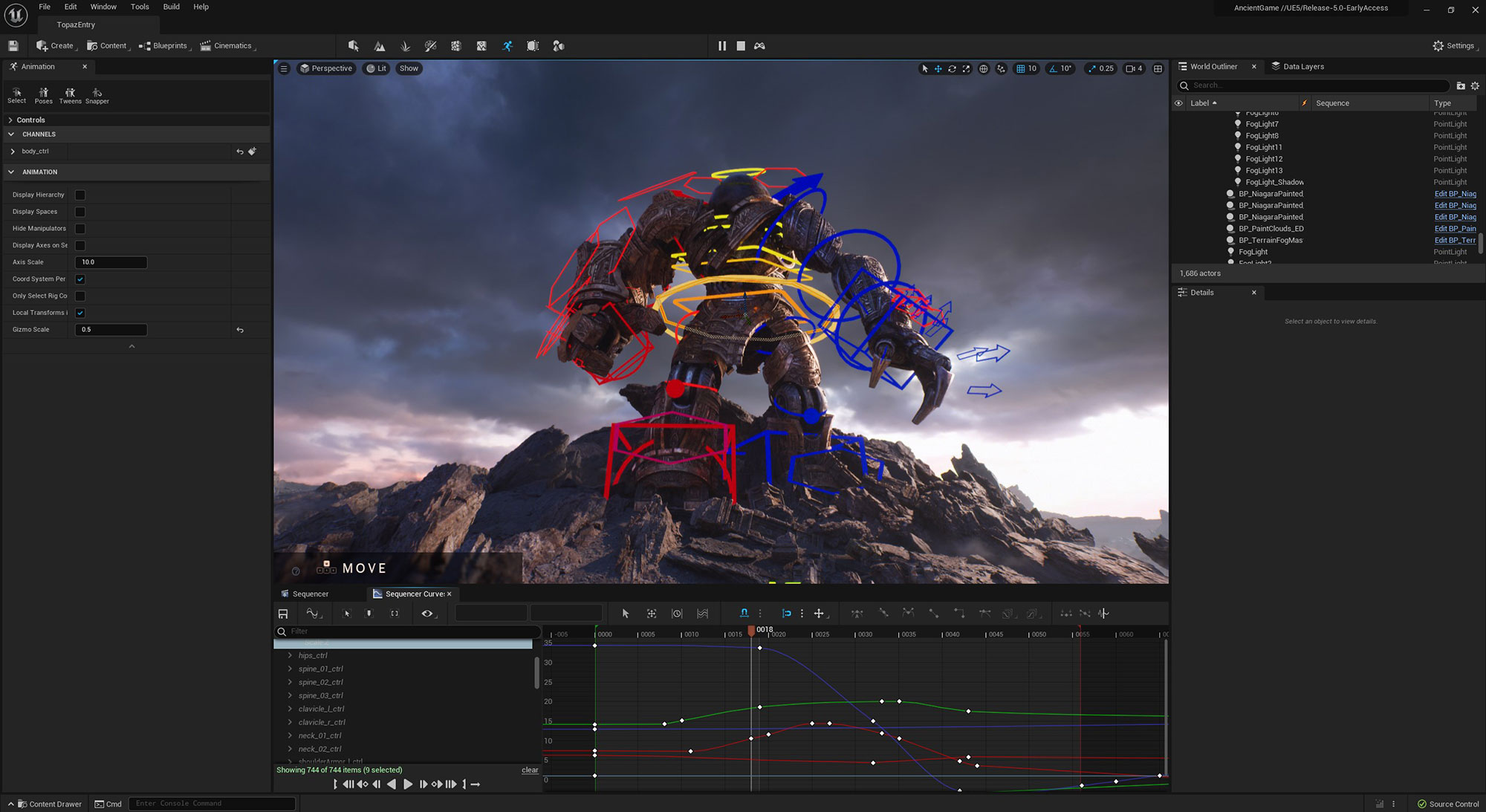 Here are some of the key features included in UE5 Early Access build, as described by Epic Games:

Our new Nanite virtualized micropolygon system lets users create games with massive, unprecedented amounts of geometric detail. Directly import film-quality source assets comprised of millions of polygons and place them millions of times, all while maintaining a real-time frame rate, and without any noticeable loss of fidelity. Nanite intelligently streams and processes only the detail you can perceive, largely removing poly count and draw call constraints, and eliminating time-consuming tasks such as baking details to normal maps and manually authoring LODs—freeing you up to concentrate on creativity.

Lumen is a fully dynamic global illumination solution that lets users create dynamic, believable scenes. With Lumen, indirect lighting adapts on the fly to changes to direct lighting or geometry, such as changing the sun’s angle with the time of day, turning on a flashlight, or opening an exterior door. This means you no longer have to author lightmap UVs, wait for lightmaps to bake, or place reflection captures—you can simply create and edit lights inside the Unreal Editor and see the same final lighting as when the game is run on console.

One of our goals is to make the creation of open worlds faster, easier, and more collaborative for teams of all sizes. The new World Partition system in Unreal Engine 5 changes how levels are managed and streamed, automatically dividing the world into a grid and streaming the necessary cells. Team members can also simultaneously work on the same region of the same World without stepping on each other’s toes via the new One File Per Actor system. Data Layers allow you to create different variations of the same World—such as daytime and nighttime versions—as layers that exist in the same space.

Author incredibly detailed characters in dynamic, real-time environments with Unreal Engine 5’s powerful animation toolset. Working in context, you can iterate faster and more accurately, without the need for time-consuming round-tripping. Artist-friendly tools like Control Rig let you quickly create rigs and share them across multiple characters; pose them in Sequencer and save and apply the poses with the new Pose Browser; and easily create natural movement with the new Full-Body IK solver. And with Motion Warping, you can dynamically adjust a character’s root motion to align to different targets with a single animation.

The revamped Unreal Editor provides an updated visual style, streamlined workflows, and optimized use of screen real estate, making it easier, faster, and more pleasing to use. To free up more space for viewport interactions, we’ve added the ability to easily summon and stow the Content Browser and to dock any editor tab to the collapsible sidebar. You can now quickly access frequently used properties in the Details panel with a new favoriting system, while the new Create button on the main toolbar lets you easily place Actors into your world.

Want to populate your Unreal Engine 5 worlds? MetaHumans created in MetaHuman Creator are compatible with both UE4 and UE5. Sign up for MetaHuman Creator Early Access to begin importing your own MetaHumans, or simply download any of over 50 premade digital humans from Quixel Bridge. 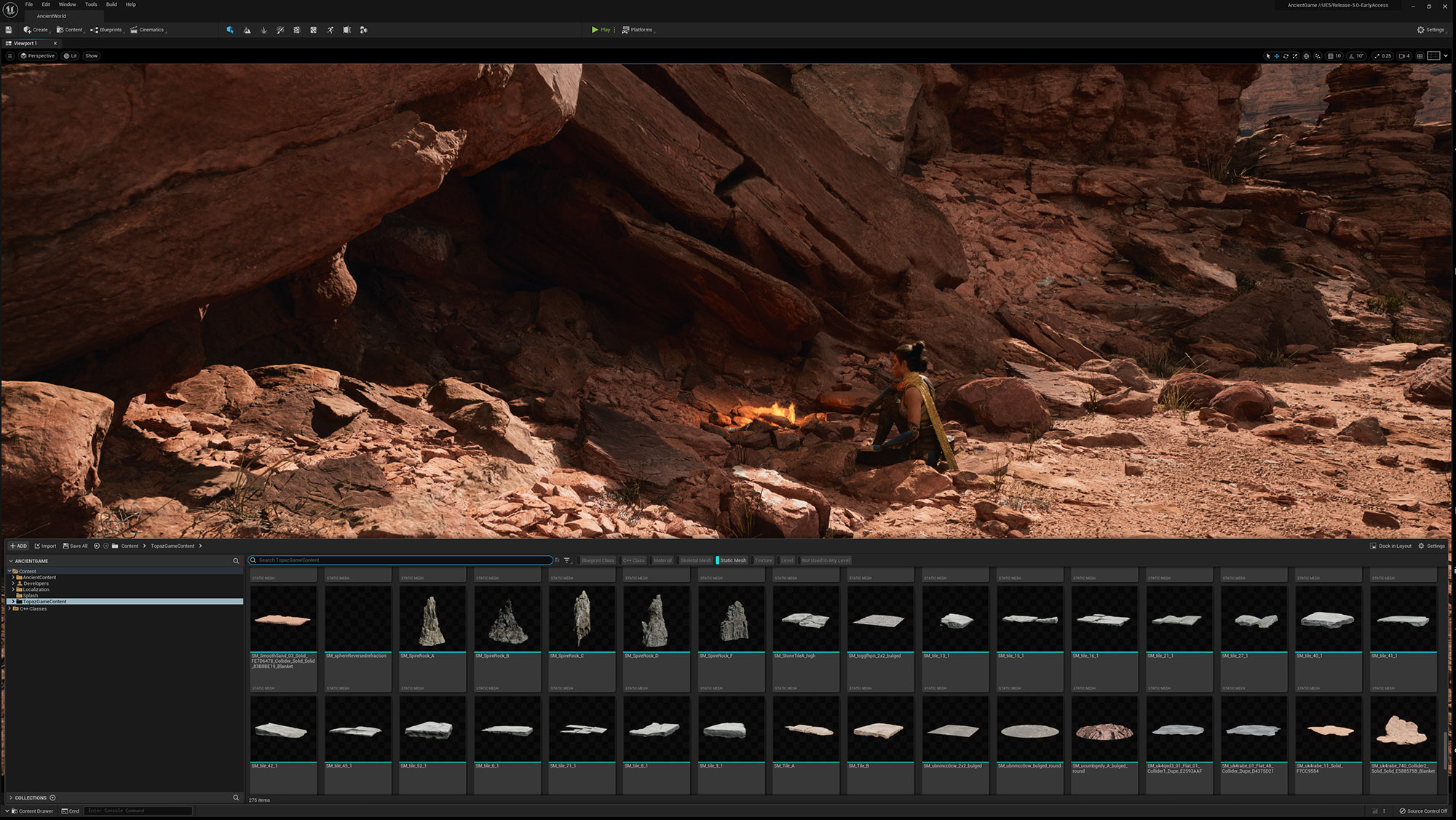 A project for you to explore

If you are curious about what’s possible to create with Unreal Engine 5 and want to test some of its features, you can also download Epic Games’ new sample project, Valley of the Ancient, to start exploring the new features of UE5 for yourself. Valley of the Ancient is a rich and practical example of how the new features included with Unreal Engine 5 Early Access can be used, and is the result of EpicGames’ internal stress-testing. You’re welcome to modify the project and make it your own using Unreal Engine.

If you’re a brand new user of Unreal Engine or are migrating from UE4, there are Quick Start guides available online tailored for different needs. Visit the website dedicated to Unreal Engine 5 to read details on the key features in UE5 and to get Early Access now.

Unreal Engine 5 Early Access broadly supports the same platforms as UE4—next‑generation consoles, current‐generation consoles, Windows, macOS, Linux, iOS, and Android—however Nanite and Lumen are currently supported only on next-gen consoles and Windows. Epic Games are continuing to develop tools and workflows that enable you to simplify high-poly geometry imported for Nanite to use on other platforms. Epic Games aims to make Unreal Engine 5 the tool for creators across all industries to deliver stunning real-time content and experiences. More features and improvements for all industries will be coming with the full Unreal Engine 5.0 release in early 2022. 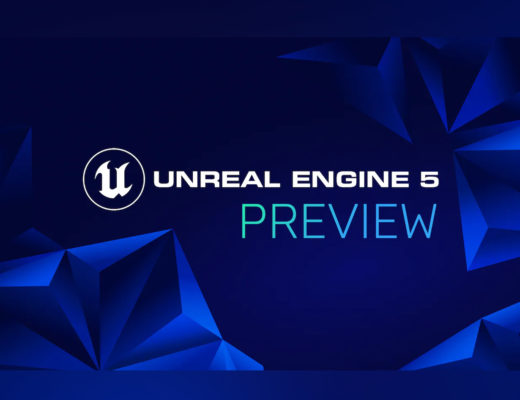 If you’ve been eagerly awaiting a production-ready release of Unreal Engine 5 the time has come to install UE5...