Allow remote guests to hear the virtual carts as you play them. 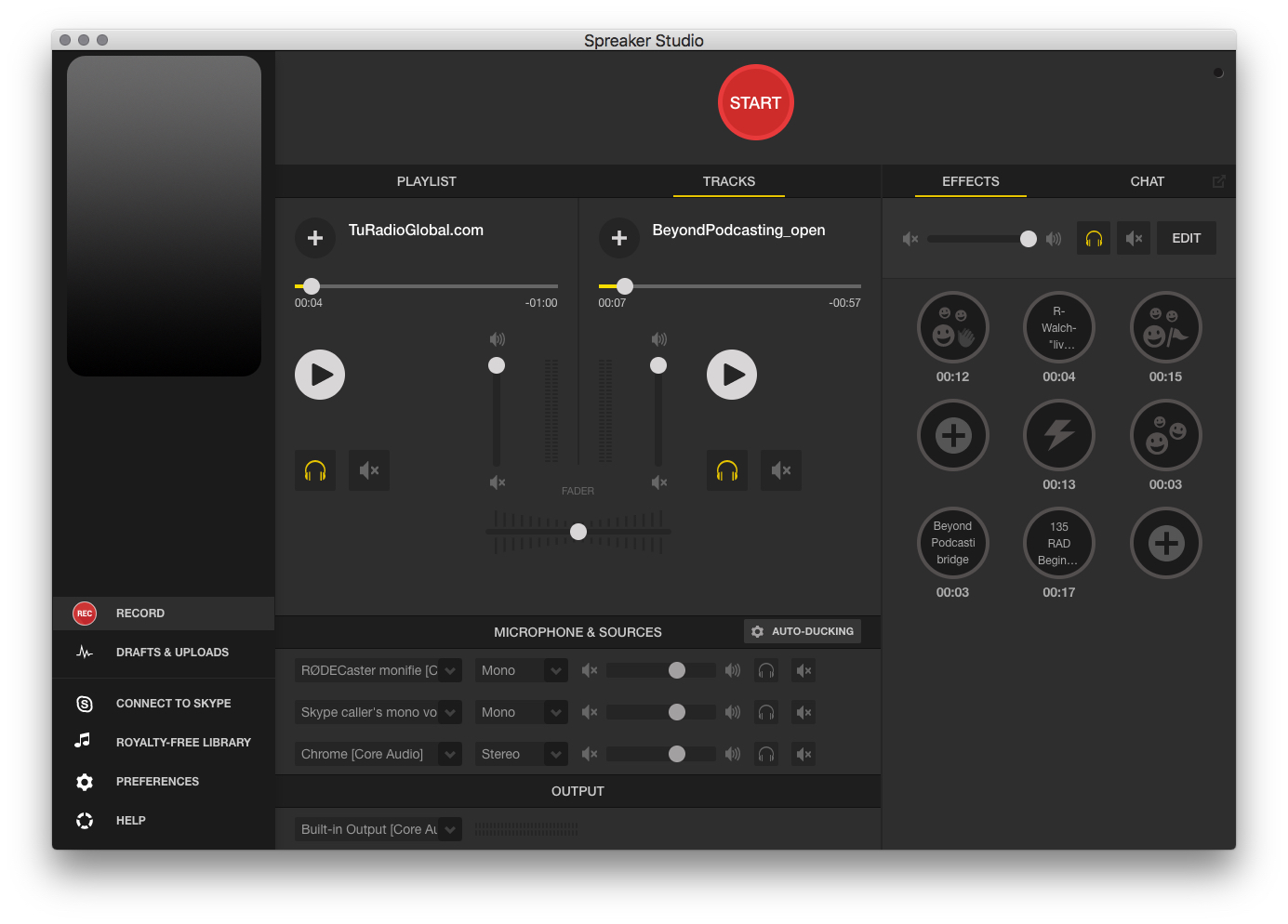 Spreaker Studio for desktop (Mac/Windows) packs a lot of power, allowing multiple local mic inputs, virtual carts, ducking and even remote guests. For Spreaker users who don’t yet own a RØDECaster Pro, the free Speaker Studio for desktop application is ideal for live broadcasting or live-to-drive, aka simulated live production. Sadly, the factory-recommended configuration for Spreaker Studio doesn’t allow the remote guest to hear the virtual carts being played. This is a tremendous handicap when the remote guest’s opinion of a soundbite is desired or required, but this problem is not Spreaker Studio’s fault! This article will demonstrate how to solve this problem completely by properly configuring a powerful middleware app for Mac, instead of the factory-recommended —yet weak and troublesome— Soundflower, which I avoid like the plague. This article will show you how to do this with Skype and alternatively with the free version of Cleanfeed, for studio-quality for your remote guest.

Stay away from Soundflower

If you have Soundflower on your Mac, you must completely uninstall it before proceeding. The process of uninstalling Soundflower is outside of the scope of this article. My advice is not to install Soundflower ever. I have previously published How to install/update Hindenburg Journalist (Pro) without Soundflower..

In Spreaker Studio for Mac, please ignore the option that says Connect Skype, since it unfortunately instructs users to use Soundflower, which is kryptonite for many reasons.

Good middleware for this task

There are at least two possible middleware applications for Mac on the market that will accomplish this, but I am only going to cover one of them in this article: Sound Siphon from Static Z Software. This is commercial software. At publication date of this article, it costs US$49 and there is a free 14-day trial. We will use Sound Siphon to create four virtual audio sources, as you will see ahead in this article.

This step will take the signal(s) from your USB interface and combine it/them into a single mono signal. This is because Skype (and perhaps other online services) only “hear” the left channel from a stereo source. Don’t worry: Your final product will still be pure stereo in case any of the music or sound effects in your virtual carts is/are stereo. This will only affect what your remote guest will hear during the production. In addition, this will indirectly eliminate another system problem explained later.

During my testing, I created one from the Tascam US–2X2 preamp/A-D converter interface I recently reviewed. Later, I created one from the RØDECaster Pro. Both worked perfectly in this setup with Spreaker Studio for Mac, although with this setup I only used the RØDECaster Pro as a mixer and USB interface, since the whole point of this article is to be able to use Spreaker Studio’s own virtual carts and allow the remote guest to hear them. My real goal was to verify that even though Spreaker Studio (currently) will only output 44.1 kHz, it is indeed friendly with an exclusive-48 kHz device like the RØDECaster Pro and causes no chip-monking. That means that it should work equally well with any other USB device that may be exclusively 48 kHz. Spreaker Studio is also friendly with 48 kHz audio files loaded as virtual carts. 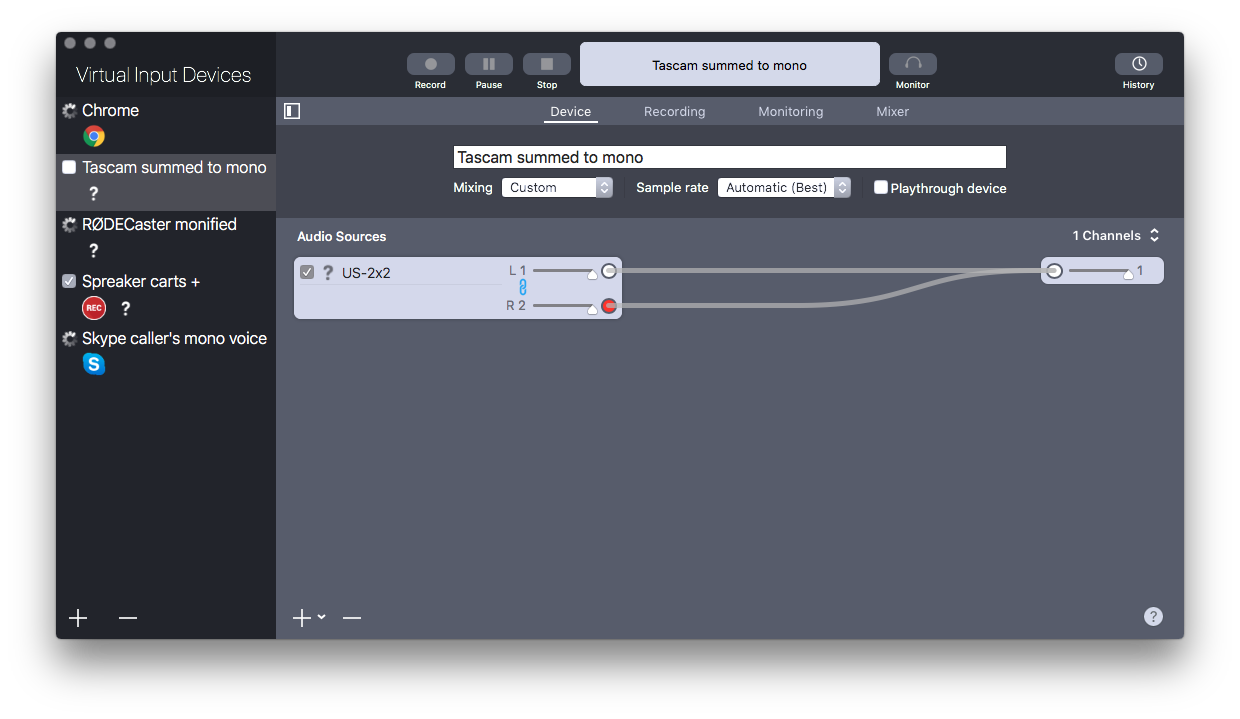 Above, an example of the virtual audio device configured for Tascam summed to mono.

To create this virtual device, you:

The purpose of this first virtual device is threefold: (a) to combine all local microphones into a single mono single for compatibility with Skype (and possibly other apps and services) and to reduce demand on system resources unnecessarily. (b) to make all of the local microphones be heard as centered, not panned right or left. (c) to solve another system issue which forces some USB sources be serially monogamous (only available to feed a single app at a time) and we need to feed it multiple apps simultaneously, i.e. to Skype (or another app) and to Spreaker Studio. 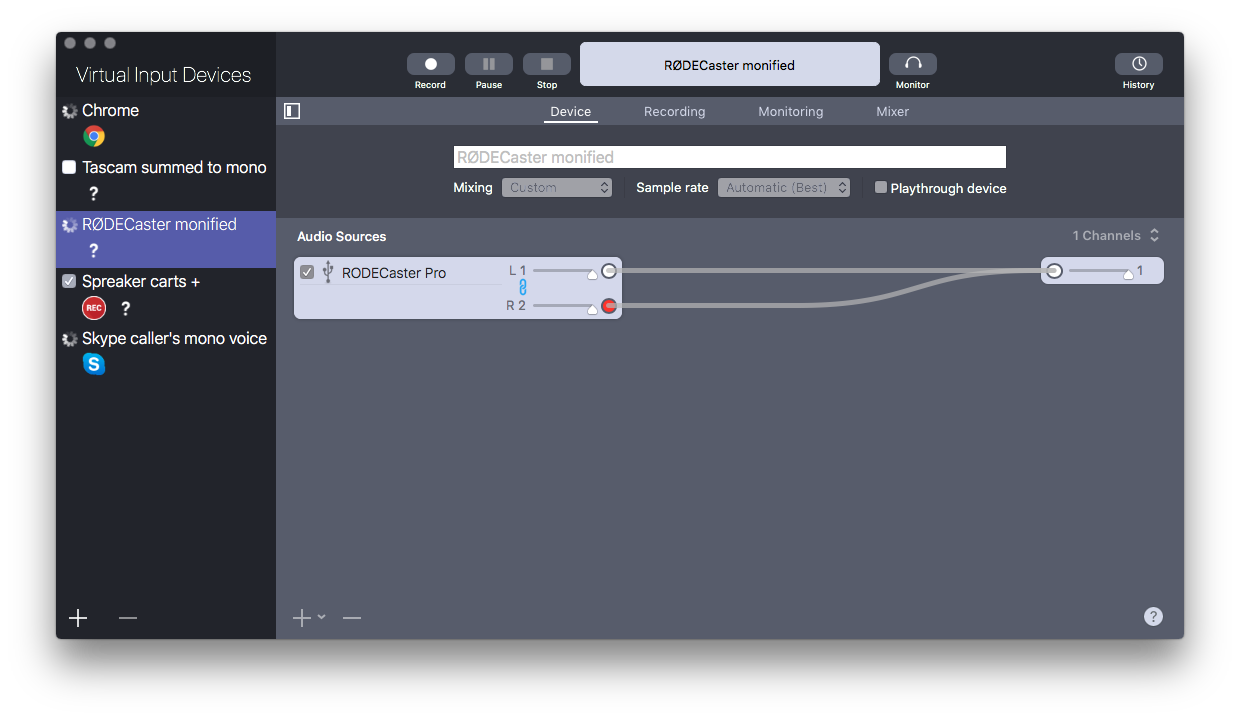 Above, an example of the virtual audio device configured for RØDECaster monified

Using Sound Siphon, we need to create a mix-minus virtual device, which will feed the remote guest(s) or phone caller(s), whether he/she/they are connected via Skype, Cleanfeed or some other communication software/service. Cleanfeed is a higher quality option which I have covered in past articles and in an interview with one of the partners. For this purpose with Spreaker Studio for Mac, you may use the free version of Cleanfeed, although you may want some of the features of CleanFeed Pro later. This is how to create this second virtual audio device. 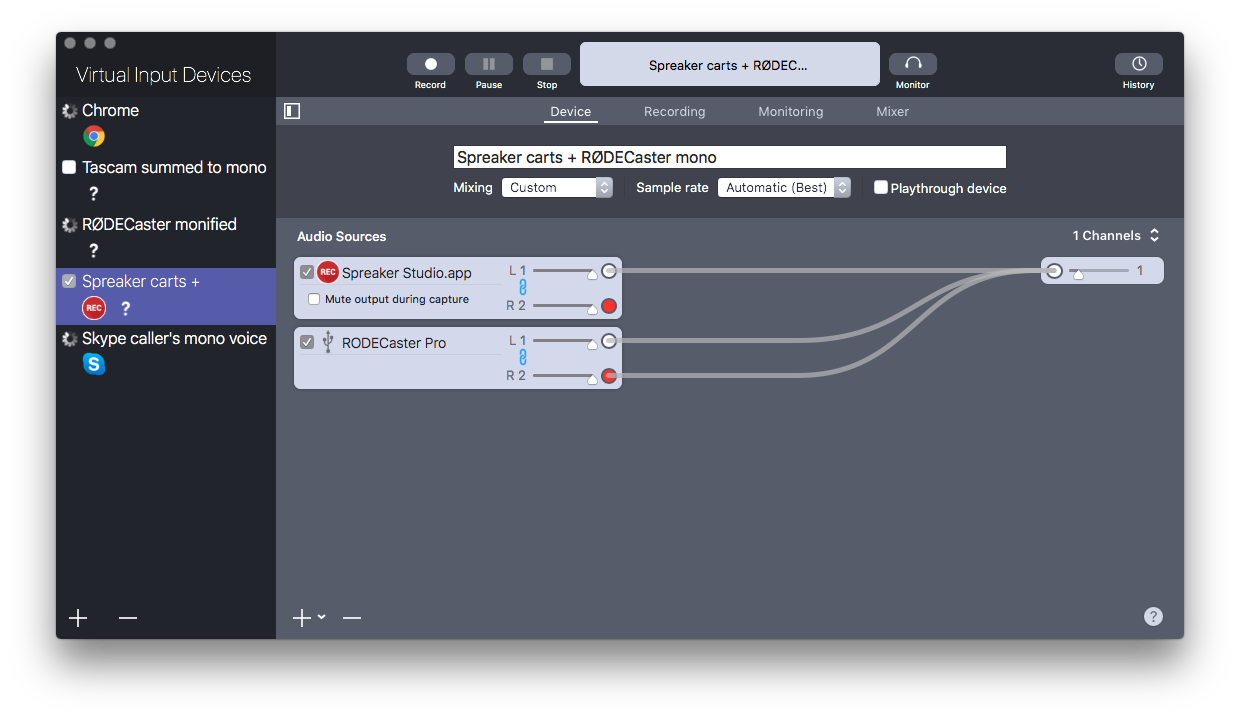 This virtual device called Spreaker carts & mics will fortunately be mix-minus and perform very well as long as you don’t activate any Monitor options on the sources in Spreaker Studio. You’ll be using this virtual device as your audio source to feed Cleanfeed, Skype or other communication software/service so that your remote caller(s) can hear both the output of all local microphones and the (previously missing) virtual carts. This will even work with any communication software/service that doesn’t offer any input selection, as you’ll see ahead in this article.

Note: This setup assumes that your isolating headphones are connected directly to the Mac’s 3.5 mm output. Other configurations are possible, but go beyond the scope of this article.

Create the virtual audio device for the Skype caller’s voice 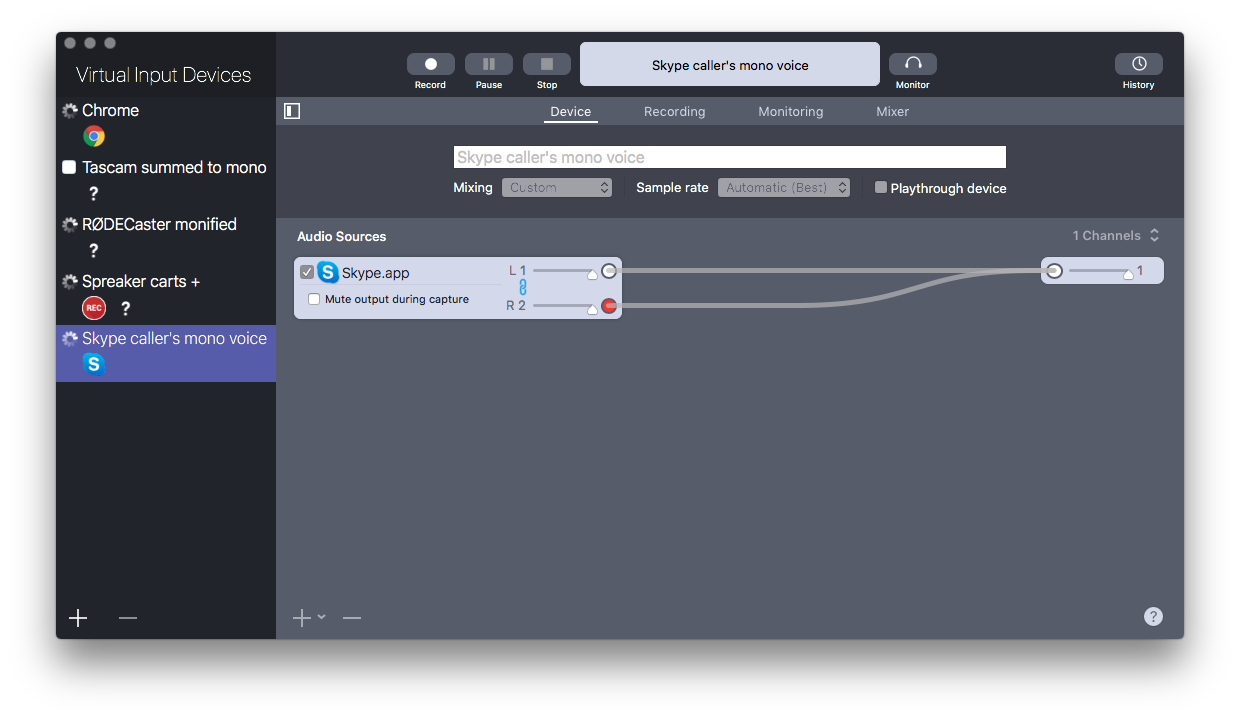 This virtual device called Skype caller’s voice will feed Spreaker Studio. Note that Skype can also be used to connect to guests who can only connect via standard telephone, although Skype charges for this capability.

Create the virtual audio device for the Cleanfeed caller’s voice 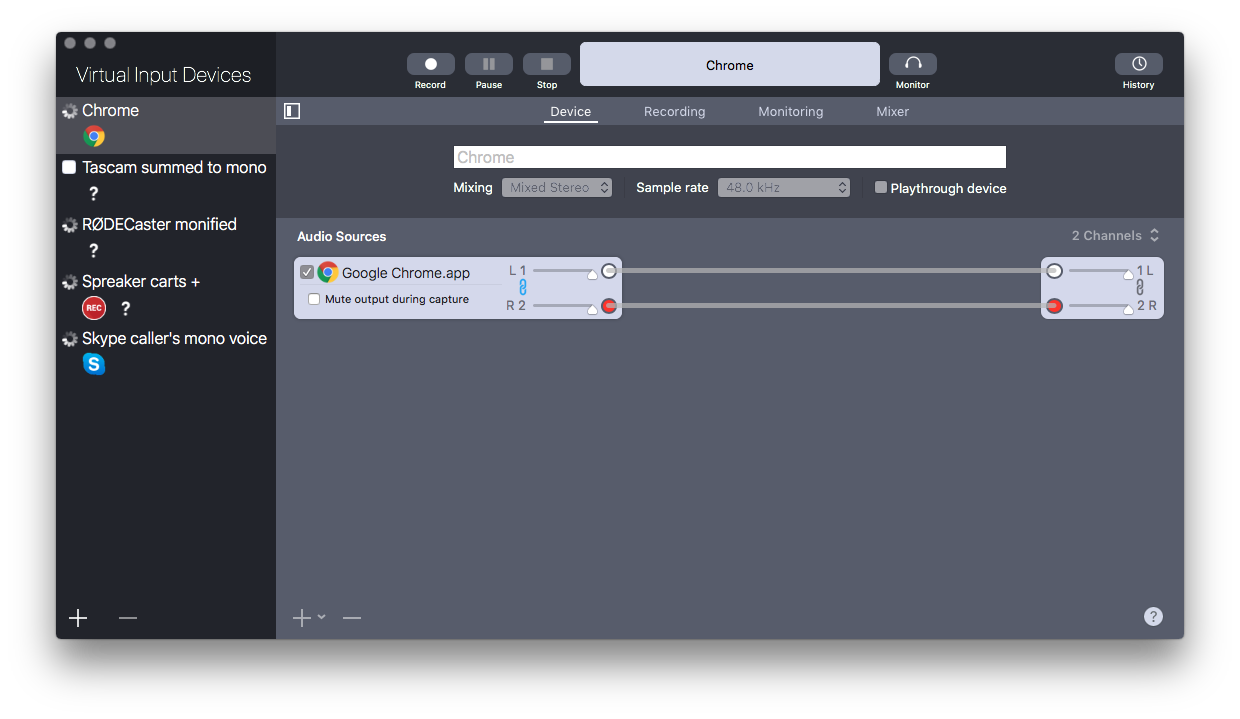 This virtual device called Chrome will feed Spreaker Studio. Note that unlike all of the previous virtual audio devices we have created, with this one, I have left it as two channel for two reasons: (a) Because if you are using Cleanfeed (free) and your guest has connected a USB interface which has 2 channels or more (and has not taken evasive maneuvers to make her/his microphone appear centered or mono) her/his sound might only be on left or right. Leaving the virtual device for Chrome channel gives you access to both or either, as I’ll cover ahead in this article. (b) If your remote guest has anything to play back, it can be true stereo even with Cleanfeed (free).

If you are using Cleanfeed Pro, then select Spreaker carts + mics (Virtual) as your input within Cleanfeed Pro. If the remote guest has a 2-channel (or greater) USB interface and will not be playing back any stereo files, select the specific input he/she is using, in order to get best signal-to-noise ratio (quality).

Inside Skype’s Audio & Video settings, select Spreaker Carts & Mics as the microphone source, and Built-in Output as the speakers setting. 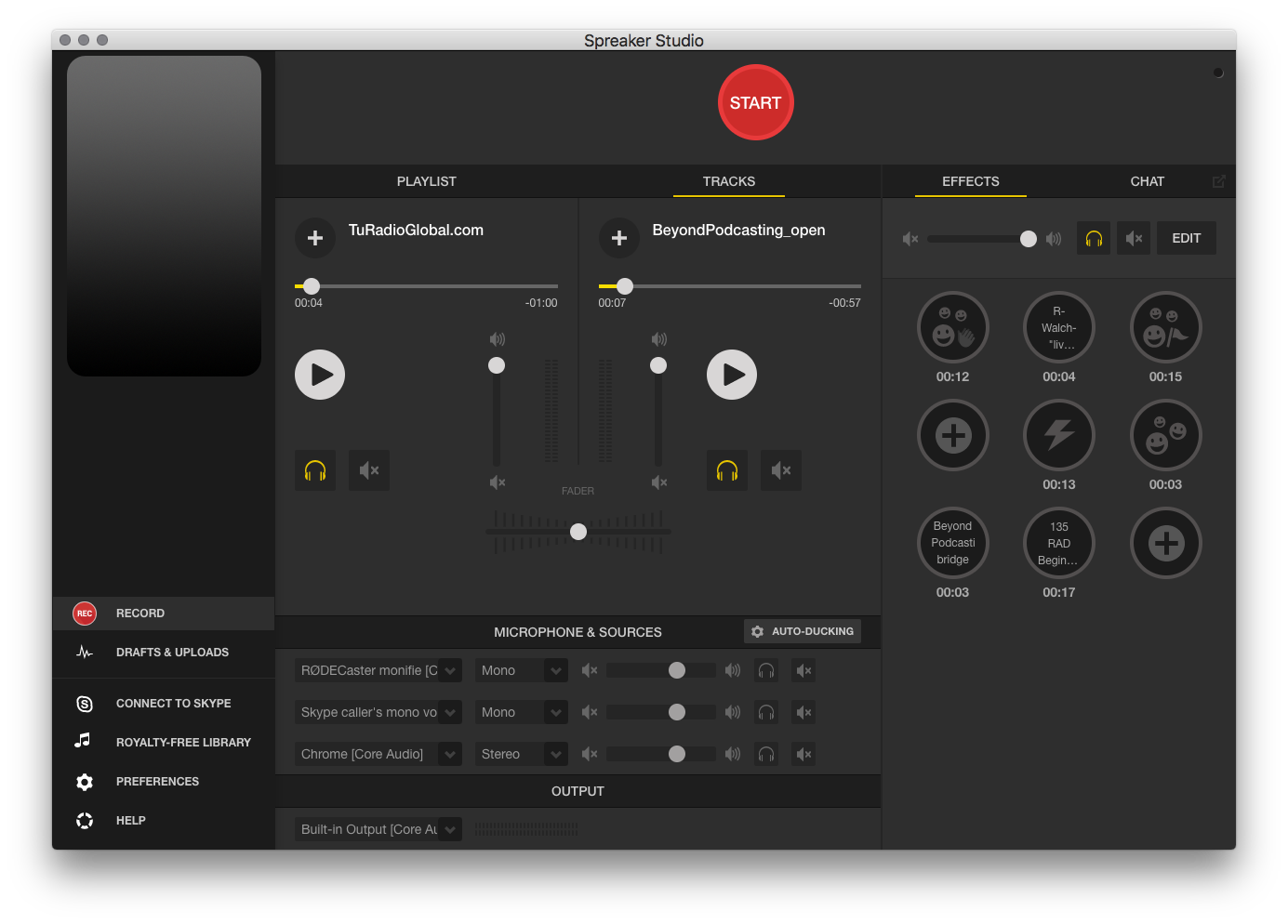 If you are using Cleanfeed Pro and have already set everything as instructed in the Adjustments for Cleanfeed Pro, then you may leave the setting as Stereo, Left or Right it and will likely not influence your quality at all.

As it stands now, Spreaker Studio can record to our local drive, or it can broadcast live via the Spreaker live CDN. Presently, that only recording is MP3 44.1 kHz stereo. In the left panel, there is currently a TAB which presently directs the user to install and configure Soundflower, which is kryptonite for the goal of this article, and the root of Spreaker Studio’s greatest indirect limitation. Here are things I would like to be changed and added:

Spreaker Studio is not a substitute for a RØDECaster Pro, but it is very powerful, especially with a good, properly configured middleware application. Previously, Spreaker Studio has been handicapped by Soundflower, but no longer. Now Spreaker Studio can have its full power.

Listen to BeyondPodcasting episode 13, where I discussed this with Rob Greenlee of Spreaker and Voxnest.

No manufacturer is specifically paying Allan Tépper or TecnoTur LLC to write this article or the mentioned books. As of publication date of this article, there has been no financial relationship between Spreaker, Static Z Software or Voxnest. So far, none of the manufacturers listed above is/are sponsors of the TecnoTur , BeyondPodcasting, CapicúaFM or TuRadioGlobal programs, although they are welcome to do so, and some are, may be (or may have been) sponsors of ProVideo Coalition magazine. Some links to third parties listed in this article and/or on this web page may indirectly benefit TecnoTur LLC via affiliate programs. Allan Tépper’s opinions are his own.