The new Typhoon Q500 4K quadcopter from Yuneec received a 4K camera together with a Steady Grip that turn the Typhoon into an “Air and Ground Imaging Solution” aiming to define the new standard in aerial photography. 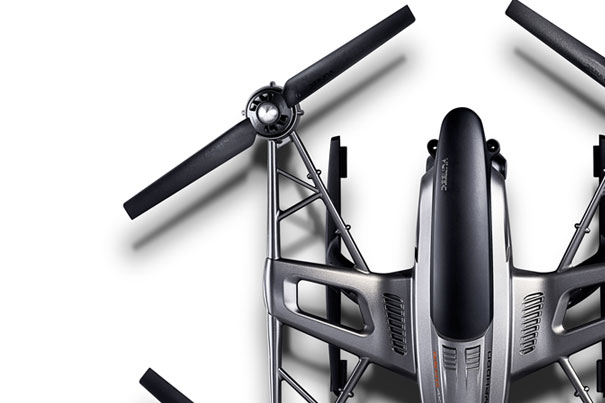 The original Typhoon Q500 quadcopter, launched in 2014, was, according to the company, the world’s first ready-to-fly, out-of-the-box drone, flyable in a matter of minutes. Now they take the platform forward, creating the Typhoon Q500 4K, as easy to fly as before, but offering higher resolution and a host of new features.

A specialist in electric aviation, Yuneec International was founded in Hong Kong in 1999. With hundreds of patents filed, Yuneec’s core technologies power its manned aircraft as well as its drones and its market leading line of radio controlled aircraft for the hobby market. Yuneec International manufactures over 1 million units a year, sold under OEM/ODM brands as well as the Typhoon brand of multi-copters. The Company’s achievements include the introduction of the hobby industry’s first “Ready to Fly” radio control electric powered airplane and the design and manufacture of the market leading radio controlled helicopters and micro-copters. 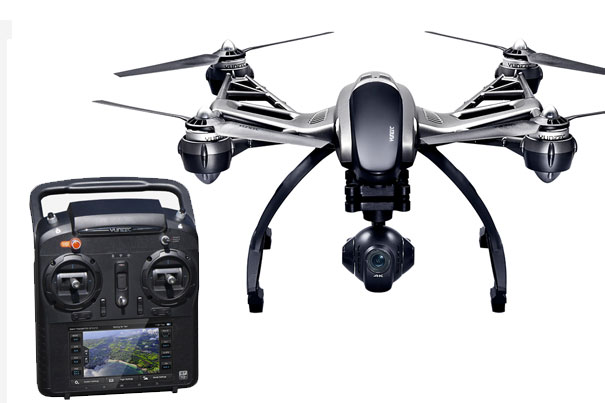 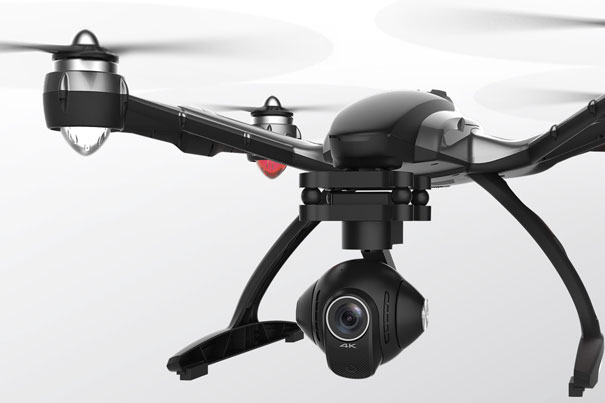 Now they move on to 4K, from an aerial platform said to work like a tripod in the sky, due to its stability. The CG03 is an innovative combination of a 3-axis gimbal, camera and digital download link. Users can control the tilt angle direction from the ST10+ control center and view the world from above, as if flying, from horizon to 90 degrees down. A 115-degree wide-angle distortion free lens allow the image to look exactly as you see it and not distorted.

The CG03 4K camera offers 4K at 30fps and 1080p at 120fps, and 12 megapixel photos. Users control functions from the Personal Ground Station, with a built-in touchscreen, and can adjust video resolution, white balance, exposure and other features. The camera can also be used with a SteadyGrip, for capturing action while on land, ensuring ground shots as smooth as those taken from the air. A mobile app for Android and iOS allows users to customize the picture and video settings and get real-time image transmission. 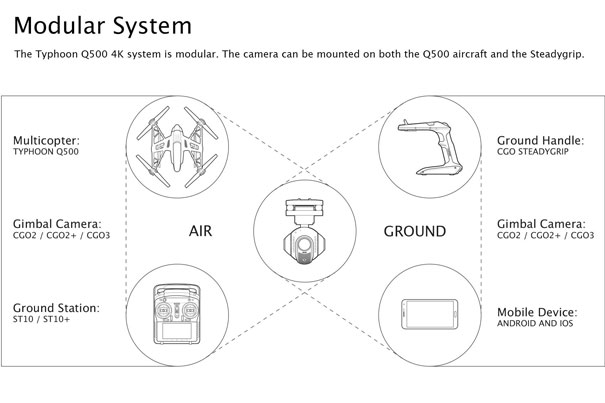 When used with the quadcopter, the camera conects to the all-in-one controller ST10+ Personal Ground Station, an all-inclusive transmitter and receiver that gives users full control over the Typhoon 500 4K during flight. A 5.5 inch screen presents all telemetry data, including flight mode, altitude, speed over ground, distance from home, camera status, GPS position coordinates and aircraft battery status. When it comes to video, users can adjust resolution, white balance, exposure – which can also be left ou automatic – along with ISO and shutter speed. Still images can be captured while recording video, and are saved as RAW (DNG) and JPEG. 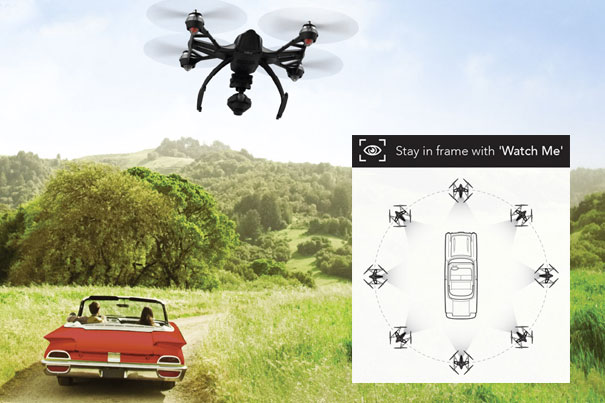 In terms of features and safety, the Typhoon Q500 4K offers Watch Me and Follow Me, Dynamic Return Home, No Fly Zones, Legal Flying Height and Smart Circle, offering a set of functions that users expect to find in a modern multicopter used for aerial videography.

Able to fly in a question of minutes, the new Typhoon Q500 4K can stay in the air for some 25 minutes. The Typhoon Q500 4K multicopter will be available from the 15th of July with a suggested retail price of $1299.

According to a post in the Yuneec forums, owners of previous Yuneec Typhoon Q500 multicopters can upgrade to the new model simply by trading their old camera for the new model, but there is no specific information from the company available yet, although some dealers, as Lucky7 Drones, have set up their own special conditions for the trade. If you’re interested please read the information on Lucky 7 Drones website.