Parrot’s teleprompter is designed for mobile production and small crews who need a compact and affordable solution. Vloggers may want to check the Parrot Teleprompter. 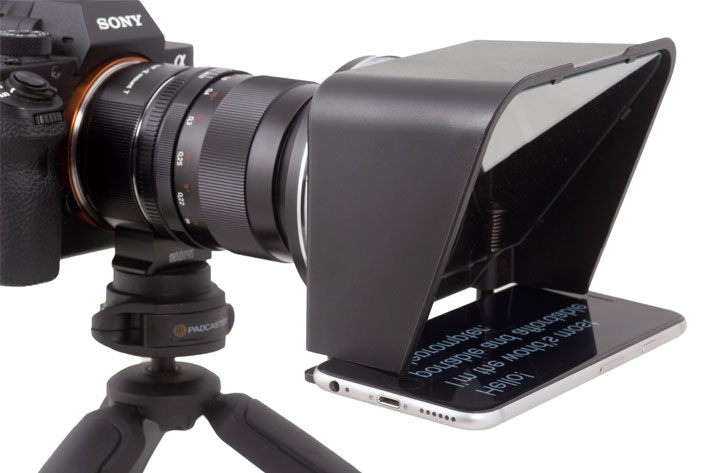 Any smartphone can be transformed into a fully functional teleprompter, a compact and affordable solution to be used with anything from a DSLR to a video camera. Meet the Parrot Teleprompter.

You’ve seen many DIY solutions, but if you’re like me and not very good in the DIY department, buying a commercial product maybe the best option. Priced at $139, the Parrot Teleprompter looks like a good deal, especially if you regularly need to use a teleprompter. Even if you just use it sporadically, the price may be right. And maybe, now that I think about it, once you’ve acquired one you’ll decide that there are many times when you can use a teleprompter. Vloggers who tend to forget their lines or need to read text while looking at the camera may want to include one teleprompter in their kit.

Parrot Teleprompter, part of the Padcaster family from Parrot, turns a standard smartphone into a fully functional, compact and affordable prompting system for nearly any DSLR or video camera. Parrot allows the talent to speak naturally while looking into the lens and interacting directly with the audience. The accessory may be of special interest to vloggers who regularly need to read text. Measuring  114.3mm x 101.6mm x 82.55mm (4.5 x 4 x 3.25 inches), and weighs just 170 grams (6 ounces) with most smartphones, the Parrot is easy to pack to take anywhere and mounts on the lens barrel of the shooting camera in a matter of seconds. 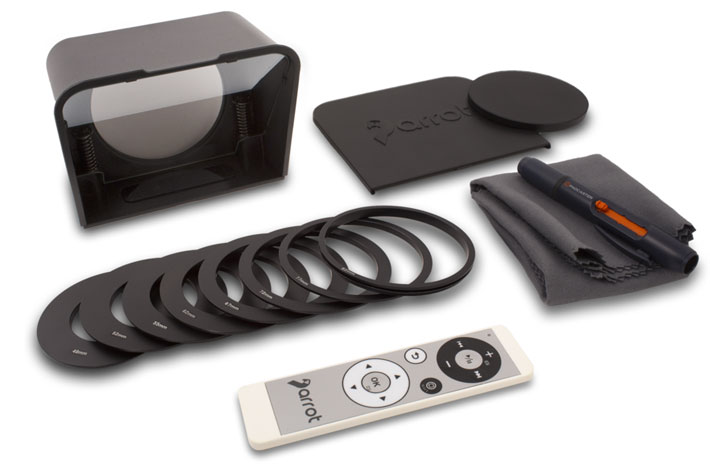 The Parrot Telepompter has been around for a while but looks more and more like a solution for recent times. With the rise of mobile production, more shoots than ever before are produced by minimal crews or even one person alone. Conventional prompting systems are often out of the question due to size, weight and cost. The Parrot Teleprompter provides interviewers and talent alike with an easy-to-read script in a simple, lightweight, affordable package that uses any smartphone. The versatile Parrot mounts to most DSLR and video cameras, as well as the Padcaster system for iPads and Verse for mobile phones. 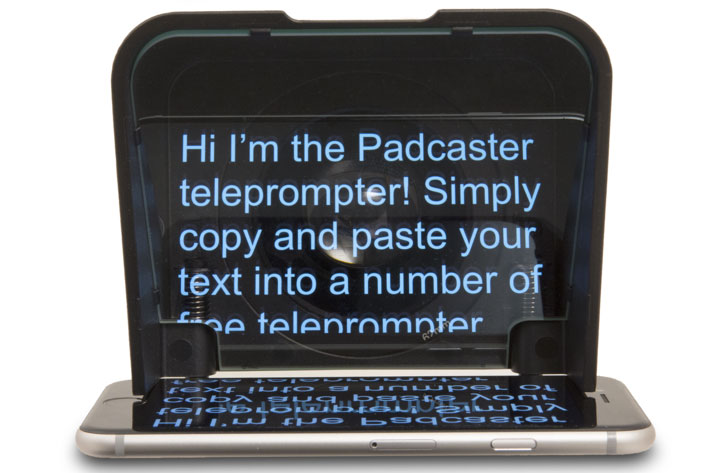 On DSLR, mirrorless or video cameras,  the Parrot mounts on the lens barrel using one of the lens adapters provided, covering everything from 49 to 82mm. The teleprompter assembly, complete with mirror, slides over the selected adapter to lock it in front of the lens. This positions a half-silvered mirror at a 45-degree angle so the camera shoots through it, while a mobile phone with a free app for the script is mounted below. A spring-loaded phone clasp swiftly secures virtually any model smartphone below the mirror. Now that everything is ready, the talent looks into the lens to read the script text reflected in the mirror.

Parrot’s wireless remote controls scrolling speed, pause, and fast forward/reverse throughout the text. The Parrot app, (available free at the Apple App Store or Google Play Store) provides for adjusting text size and width. The Parrot Teleprompter is made of rugged components to withstand even the most challenging environment. Its high-end mirror is easy to read text from, while ensuring that the video remains crystal clear. 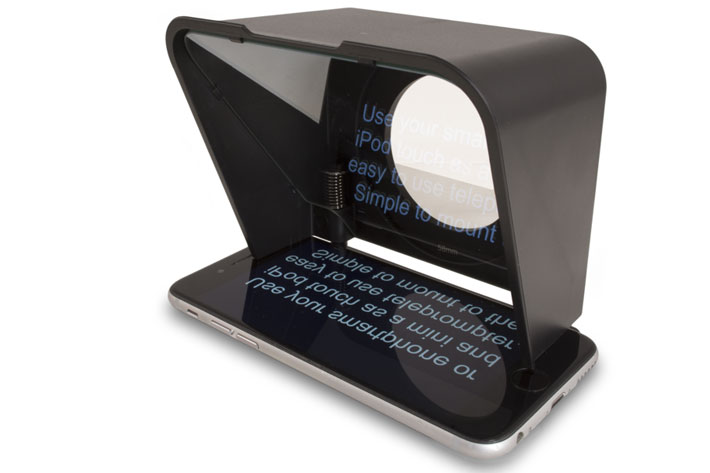 Introduced back in 2016 through a Kickstarter campaign, the Parrot Teleprompter is part of the Padcaster family of products from Parrot, which can be seen at IBC 2018 (Hall 8 Stand 8.C05). Featured in Apple’s “Your Verse” international advertising campaign for the original iPad Air, as well as the iPad Air 2 “Change” campaign, Visa’s “Visa Checkout” campaign, CBS’s “Madam Secretary,” NBC’s “A.P, Bio,” Showtime’s “Ray Donovan” and others, Padcaster is a patented, rugged multifunctional iPad solution that transforms the iPad into an all- in-one mobile production studio.

Padcaster’s expanded product line now includes the Verse, Padcaster Parrot Teleprompter and a complete line of value-added accessories to enable consumers to shoot, edit and upload video on the fly – or stream live right from the iPad or smartphone. More than an innovative way to mount an iPad or smartphone to a tripod, Padcaster transforms your mobile device into an all-in-one production tool that enables a new category of convenient and cost-effective professional quality video documentation and production. Again, something that vloggers, small crews and one-man-band videographers will appreciate!