Motionworks has a new tip on Twitter noting the limitation of Layer Styles for 3D in After Effects. You can find background this problem in Chris & Trish Meyer's CMG Hidden Gems: Chapter 13 – 3D Space.{C}

This article, 1st of a group of 4 on 3D in After Effects, covers Rotation versus Orientation, 3D Views & Shortcuts, View Options, Axis Modes, and Mixing 2D and 3D Layers. That last section is good to review because of the gotchas with Layer Styles and Adjustment Layers with AE 3D. Chris explains:


Groups of 3D layers that are stacked between 2D layers in the Timeline panel are internally flattened down to a 2D result, as if they were in a precomp by themselves. The entire composition is then rendered as if it consisted only of 2D layers, with each group of 3D layers being treated as a single 2D layer in the middle of the stack.

AE Help explains it this way: 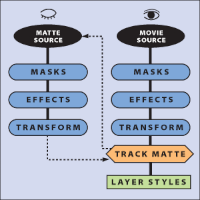 If you remember that it's an odd man out in render order, Layer Styles are useful beyond the obvious: for light wraps (see AE Portal) and Track Matte shadows (explained by Chris Meyer in an earlier Hidden Gem; other wrinkles at PVC).