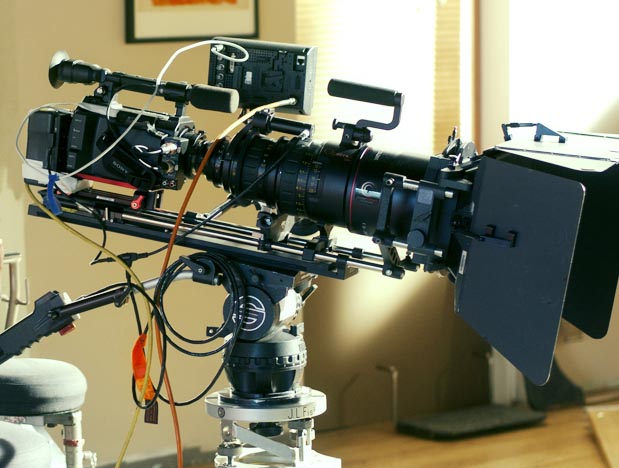 As a recovering technoholic-cameraphile, I am desperately trying to make my way out of the addiction cycle of endless camera tests and back toward the rest of humanity. I want to be a part of the species that just wants to viscerally respond to a beautiful, spirit-moving image of light, shadow and color. I want to be thrilled by beauty, not sourly deconstructing the failings of this week’s latest offering from the constellation of video camera vendors.

But it’s hard not to do that. Video cameras, SD, HD, Ultra-whatever, tend to fail by some metric. By and large they hit the wall (or ceiling, or floor…) in the image capture and storage process. By their cold, calculating logical nature they sample, reduce and approximate what we see, or what we we’re used to seeing, on photochemical film.

Fortunately for us, we live in an era where the digital is quickly approaching the chemical in terms of image fidelity and soul. The cameras I have been most impressed and inspired by, image-wise, are the Arri Alexa and the RED Epic system. These are brilliantly engineered digital camera systems that produce stunning images that pleasantly distract me from criticizing any failings they may have. Such precision and grace is not cheap, they cost a lot of money to own and to rent (in relative indie filmmaking terms, not actual professional commercial filmmaking terms). When I have the budget, these are my cameras of choice.

I often don’t have the budget.

This is where the Sony PMW-F3 stepped in. Out of the original 13,000 dollar box (which means a base rental of 350 – 450 a day), the camera shot a very good 1080P image and recorded to either the “crushing sadness” of XDCam or the “wow, there’s no noise” awesomeness of ProRes 422 via a cable and some kind of capture device like a deck or digital recorder such as the KiPro (tack on another 150-250 bucks a day rental)

The F3, when combined with some expensive rented lenses (500 – 600 a day), proper lighting and post color love, produced the I-can’t-believe-it’s-not-film-look of high-end digital moviemaking. You had 1080P, ProRes 422, Rec 709, a high ASA and a large image sensor for shallow depth of fieldiness all for about a thousand dollars-a-day. This is a third the cost of a comparable Arri Alexa or RED Epic package. It’s not the pick-it-up-and-wander-around-the-city-late-at-night perfection of the Arri Alexa. Or the I-have-so-many-pixels-I-can-see-what-the-talent-is-thinking clarity of the Epic, but the F3 shoots a great, noiseless, clear digital image at a bargain-ish of a price.

This month, Sony released the SLOG/ 444 update and the F3 got even more better. For the uninitiated, shooting LOG (logarithmic) is a way of recording the image so that the highlights and shadows captured by the image sensor are preserved and encoded into the video file. It’s a way to minimize the terrible artifacts of clipping highlights and crushing shadows that are the sure-sign your “film” was shot with a video camera. Shooting in 444 means no color compression is applied to the image, again, another feature that existed on the F950, F23 and F35 high-end cameras and has been ported down to the “prosumer-ish” F3. While Sony is sending this out as a firmware update, it’s an update that F3 owners have to pay 3K to do.

Sony’s SLOG has existed on their higher-end cameras like the F23 and F35, but this firmware update marks the first time a prosumer camcorder has had the ability to shoot the “digital negative” of video. And while SLOG is a tremendously powerful image making tool, it is not a substitute for properly lighting your scene and picking the correct exposure. SLOG will preserve highlights with minimal clipping, and keep shadows from crushing, but without proper lighting and exposure, you’ll run the risk of throwing away a diverse range of mid-tones. But treat it right and you’re looking at 13-14 stops of latitude, that’s nothing to sneeze at.

Of course, rental economics take a hit as well, an SLOGged F3 renting for 650 a day vs. 350 a day. And a digital recorder or separate VTR capable of recording the massive data spew of 444 and you’re looking at a 1K a day rental vs. 150 bucks a day. All of a sudden the affordable indie solution for SLOG is within spitting distance of an Arri Alexa or RED Epic day rate.

What is the Low Budget Filmmaker to Do?

If you don’t have a friend with a free SRW-1 deck to loan you, or you’re not living in the future where 444 dual stream HD-SDI capture is included on your SmartPhone, you’re stuck in a strange spot. You want the “digital negative” of SLOG without the titanic data rate of 444.

Thankfully, the Sony PMWF3 will inadvertently output an SLOG image in 422 out of the monitor output. All you have to do is disable the LUT (Look Up Table, the process that makes a washed out looking SLOG image all poppy and client friendly by converting it to standard Rec. 709) and capture it on a single SDI cable to a more budget friendly KiPro.

The short answer is “yes”. For a really thorough explanation of why SLOG makes a real difference read this amazing and easy-ish to understand explanation by my PVC colleague Art Adams.

Reflection on my F3 Spring/Summer

Having directed, or tech’d, multiple projects using the following permutations of the F3 over the last few months:

Here are my very simple conclusions:

1) The F3 is closer to an ASA of 400, not 800. Treating it like that will get you some incredibly beautiful, noise free images with a wide latitude. Treat this camera right.
2) Avoid XDCam, shoot ProRes to an external recorder. Seriously getting out of the color killing world of 420 and XDCam is liberating. Less noise, way, way better skin tones and a much more pleasant image overall.
3) SLOG is better than Rec 709 (read Art’s article)
4) 422 is great, 444 is even better. I know you don’t have the money, but seeing a well exposed, well lit SLOG 444 image is a perfect and beautiful experience. The expensive, extra gear needed to capture it, not so much.
5) Spend as much money as you can on Cinema glass, whether it’s a 6 piece kit of Zeiss Ultra Primes, or the Impressive Hubble Sized Angenieux Optimo 24-290, you’re looking at 500-600 bucks a day. Spend it. Don’t waste your time with still camera lenses (even the awesome sweetness of L-Series Glass), Cinema lenses are designed to get you through your shot list without crying.
6) The rental houses charging an extra 300 bucks a day for the SLOGged F3’s are charging too much. Mostly because the market that wants an F3 is the market that will be shooting to the least expensive HD recorders. Perhaps when dual stream HD-SDI recorders out there like the Convergent Design Gemini 444 (whenever it actually ships and can be rented) drop down in price (which they will), then producers will be willing to spend the money. But for now, it’s SLOG 422 out of the monitor port. I think the upgrade should add an additional 30-50 bucks per day on the rental, seriously it’s a 3000 dollar upgrade, why is it costing 300 bucks a day more? That’s some weird rental house arithmetic, no?
7) In the end, clients don’t care about a REC 709 LUT on their display. Some displays, like the Cinetals let you throw a LUT on, there are boxes like the HDLink from AJA that let you create your own LUT, and you can always just tweak knobs on client monitor itself to crush and pop the image.
8) Shooting S3D on the F3 was relatively painless. The only other time I’ve shot S3D was on the F23, and there were quite a few technical hurdles to deal with. Color and sync between the F3s was solid. Very little ghosting. The S3D effect is even more stylized on the Super 35 sized sensor of the F3 vs. the 2/3″ sensor of the F23. I was worried about this until I saw it, now I’m kind of a fan of a Super 35 bokeh in S3D images. Who knew?
9) Is it really a “Baby Alexa” as some have called it? Not quite, but it’s close. The Alexa is still better in low-light, built like a tank, easy to use, and let’s you record ProRes 422/ 444 to SxS cards (seriously, Sony, why don’t you do this too? You make SxS cards, give us ProRes444 to a card on the F3 and it’s game over!). The F3 is durable,but plastic, and feels prosumer-ish. But it’s a Sony, and you know how all the buttons and sub-menus work if you’ve ever worked with any Sony camera in the past.