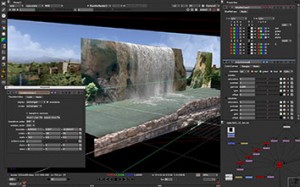 Although nearly a decade old and tested in production on some of world’s most recognized visual effects films, Nuke is the new kid on the block when compared with its older rivals, such as Shake (which will see no more upgrades from Apple) and After Effects, which just turned 15 last month. Version 5.0 is the first major release since the software was acquired by The Foundry UK, and this release addresses the one shortcoming everyone agreed about: a less than beautiful user interface in previous versions, cluttered (as Adobe applications used to be) with floating palettes. No doubt this UI makeover is about more than looks (but looks are important in an app that a visual artist might stare at for the most waking hours).

Additional new features in version 5.0 include :

– Python scripting (and there was much rejoicing among nerds)

– Stereoscopic Support (for 3D movies, which I can report first hand are tricky to composite)

– Mask Inputs (another feature, like the UI upgrade, which will help Shake artists settle down)

– Global Undo/Redo (especially welcome to the Shake crowd, who never did get a proper undo/redo!)

Nuke 5.0 is $3500. The Foundry offers floating licenses (without adding the usual premium over node-locked licenses). More info at Nuke.