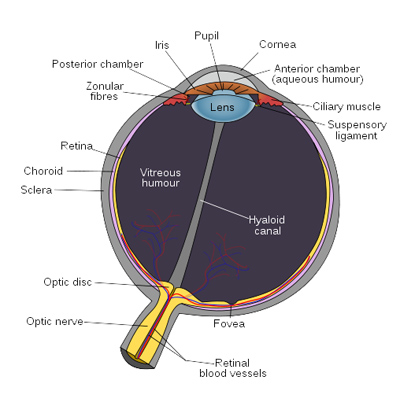 The eye is nearly a sphere, with an average diameter of approximately 20 mm. Three membranes enclose the eye: The cornea and sclera outer cover; the choroid; and the retina.

At its anterior extreme, the choroid is divided into the ciliary body and the iris. The latter contracts or expands to control the amount of light that enters the eye. The central opening of the iris (the pupil) is, on optimal condition of 4mm in diameter. It varies from approximately 2 mm (f/8.3) in a bright environment to 8 mm (f/2.1) in the dark. The latter value decreases slowly with age, older people’s eyes sometimes dilate to not more than 5-6mm.

The lens is made up of concentric layers of fibrous cells and is suspended by fibers that attached to the ciliary body. The lens is colored by a slightly yellow pigmentation that increases with age. The lens absorbs approximately 8% of the visible light spectrum, with relatively higher absorption at shorter wavelengths. Both infrared and ultraviolet light are absorbed by proteins within the lens structure and, in excessive amounts, can damage the eye. That is why you should always wear UV blocking sunglasses, especially in our field of work.

Pattern vision is afforded by the distribution if discrete light receptors over the surface of the retina. There are two classes of receptors: cones and rods. The cones in each eye number between 6 and 7 million. They are located primarily in the fovea, and are highly sensitive to color. Each of the cones is connected to its own nerve end, carrying, then, finer details. Musles controlling the eye rotate the eyeball until the image of an object of interest falls on the fovea. Cone vision is called photopic or bright-light vision.

The number of rods is much larger: Some 75 to 150 million are distributed over the retinal surface. The larger area and the fact that several rods are connected to a single nerve end reduce the amount of detail discernible by these receptors. Rods serve to give a general, overall picture of the field of view. They are not involve in color vision and are sensitive to low levels of illumination. Objects that appear brightly colored in daylight appear colorless in moonlight because only the rods are stimulated. This phenomenon is known as scotopic or dim-light vision. 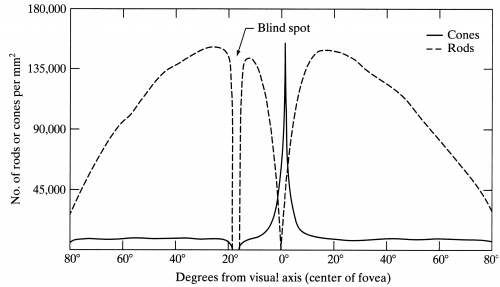 As you can see in the diagram, the distribution of cones and rods in the human eye, there are none in the region where the eye is connected to the nerve and sheath. This is the eye’s blind spot.

The fovea (the one we mainly use to ‘see’ in color) itself is a circular indentation in the retina of about 1.5 mm in diameter. The density of cones in that area is about 150,000 elements per mm2. So the fovea offers a resolution of about 265,000 cones that can be compared to the pixels of a camera. But keep in mind that we constantly ‘scan’ our field of view and our brain, through memory, helps us reconstruct the entire image. Also, our brain combines the information coming from the two eyes to see more in detail.

The eye works like any photo camera (or I should say the opposite). The range of focal length is approximately 14 mm to 17 mm. The latter taking place when the eye is relaxed and focused at a distance grater than about 3 m.

The range of light intensity levels to which the human visual system can adapt is enormous – on the order of 10^10 – from scotopic threshold (first things we can distinguish in the dark with our dim-light vision) to glare limit (don’t try it).

Subjective brightness (intensity as perceived by the human visual system) is a logarithmic function of the light intensity incident on the eye. 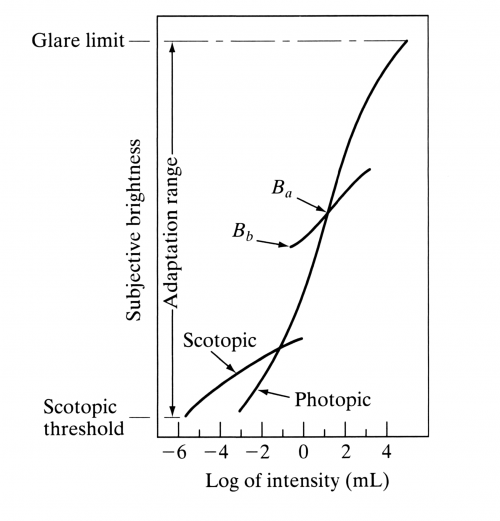 The photopic vision alone has a range of about 10^6 (about 20 f-stops!). The transition from scotopic to photopic is gradual over the approximate range from 0.001 to 0.1 millilambert (-3 to -1 mL in the log scale above).

BUT, it is important to remember that our visual system cannot operate over such a range simultaneously. Rather, it accomplishes this large variation by changing its overall sensitivity, a phenomenon called brightness adaptation. Think of yourself when you enter your cellar, or exit a tunnel.

The eye re-adjusts its exposure both chemically and geometrically by adjusting the iris, which regulates the size of the pupil. Initial dark adaptation takes place in approximately four seconds of profound, uninterrupted darkness; full adaptation through adjustments in retinal chemistry (the Purkinje effect) is mostly complete in thirty minutes!

The total range of distinct intensity level that the eye can discriminate simultaneously is rather small when compared with the total adaptation range. For any given set of conditions, the current sensitivity level of the visual system is called brightness adaptation level.

For example, to a brightness Ba on the graph above, the short intersecting curve represents the range of subjective brightness that the eye can perceive when adapted to this level. Every intensity below Bb will be, then, seen as indistinguishable black.

The brightness adaptation level is typically around 100:1 or about 6 ½ f-stops.

P.S.: For more info on that subject, I would sugest the excellent book “Digital Image Processing” from Rafael González and Richard Eugene Woods. Pearson/Prentice Hall (2008) ISBN 013168728X. You can find it here: http://tinyurl.com/2wo8ej4