Peek behind the scenes and discover how a team captured pro rock climber Alex Honnold as he climbs the European Alps—without any ropes. It’s a breathtaking VR experience. 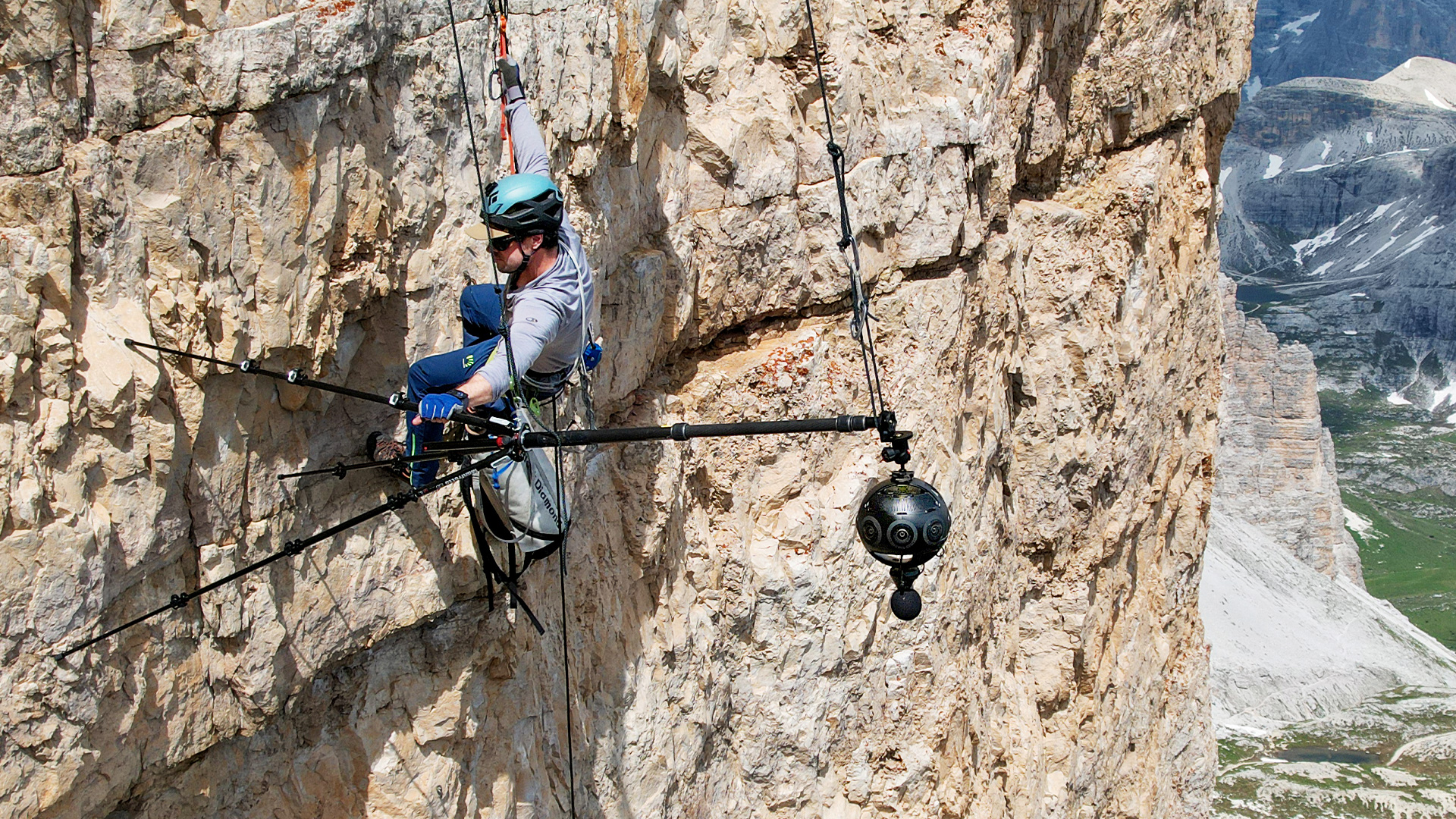 You may have experienced climbing mountains in VR, but now you can follow real-world climber Alex Honnold’s death-defying climbs in The Soloist VR, an experience shot on the Insta360 Titan camera.

Those familiar with Virtual Reality may have experienced the astonishing sensation of free solo rock climbing in VR in The Climb and The Climb 2 games. The second version of the game, launched March 4, 2021, allows users to experience 15 brand new maps full of obstacles, secrets, flora and fauna, multiple paths to the top, different difficulty settings, and stunning views, always, with everything from the Alps to canyons… or buildings. While playing, you may have said to yourself: this is just a game. Well, for Alex Honnold it isn’t, and this March you can get a taste of how it is to climb, in the real-world.

Alex Honnold: The Soloist VR is a two-part virtual reality experience that brings viewers into the world of pro rock climber Alex Honnold as he climbs the European Alps—without any ropes. While climbing the Alps would be terrifying enough for many, Honnold is a pro at “free soloing”, a form of rock climbing where the climbers climb without the aid of ropes, harnesses or any other protective equipment.

Viewers might remember Honnold from the Oscar-winning National Geographic film Free Solo, in which he became the first person to ascend Yosemite’s El Capitan rock face without ropes. In Alex Honnold: The Soloist VR, shot on the 10K 3D Insta360 Titan camera, Honnold takes his death-defying talents to Europe, free soloing the American Direct on the Aiguille du Dru in Chamonix and the Kuffner arete on Mont Maudit. 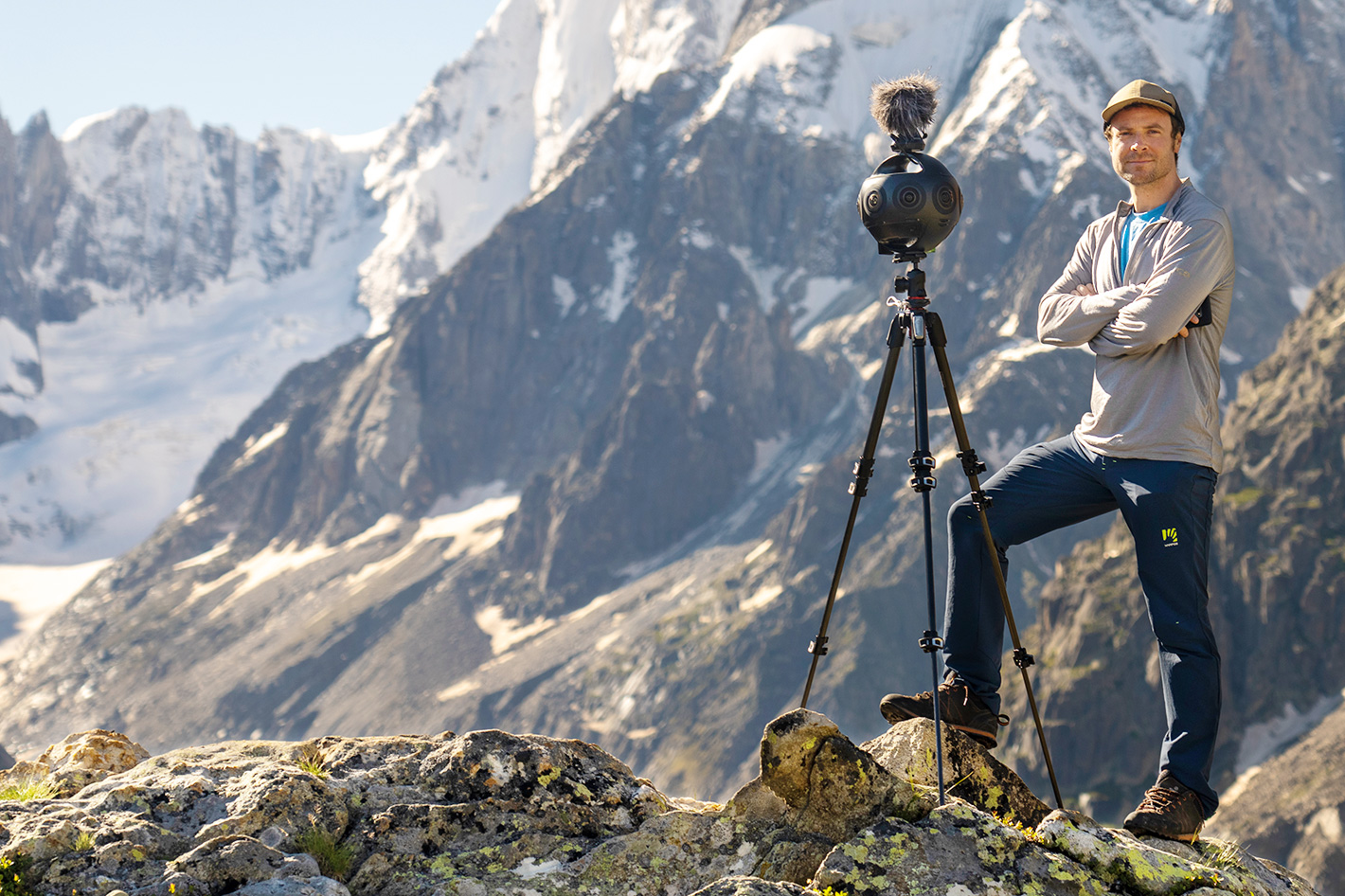 Now, if you’ve the right gear, you can tag along for the climb. The film from Jonathan Griffith Productions is now available on Oculus TV through the Meta Quest VR headsets. A behind the scenes documentary about the VR film, Making the Soloist VR, is also available on Red Bull TV. It’s unfortunate, though, that the experience is only available for the non-tethered Meta Quest (previous Oculus Quest) VR headsets, which does not offer the quality available for PCVR headsets. Still, you can watch the documentary about the VR film, as you don’t need to have a VR headset. 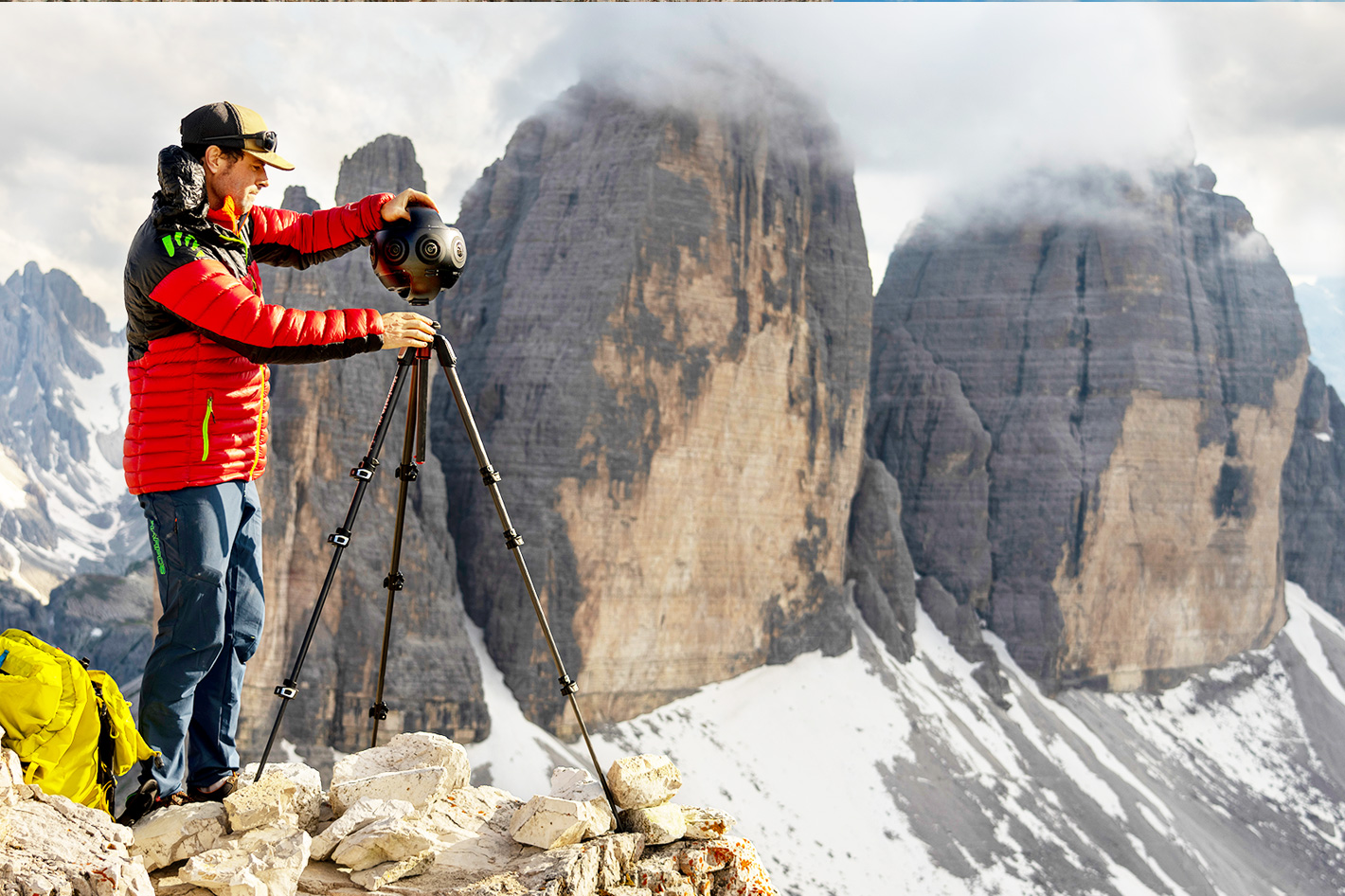 Here is some more information about the project that may interest ProVideo Coalition readers:

Honnold and the filmmakers behind the project were attracted to VR due to its unmatched immersion and the unique perspective it can offer viewers. As Honnold explains in the behind-the-scenes documentary, “Nobody’s ever asking about the good side of the experience. Everybody just wants to know what happens if you fall. In VR, at least you can look around and appreciate the good side of the experience, which is that you’re in this crazy place, having this cool climbing adventure.”

Griffith originally started out as a photographer, but after putting on a VR headset for the first time, he fell in love with it instantly. “There is nothing that can quite compare in terms of immersion into my world of climbing as VR. In TV, you still have a barrier… where you know you’re not physically there. But in VR, you are so fully immersed, and you are right there and there is nothing between you and the scene. I want to share that immersion with people,” said Griffith. 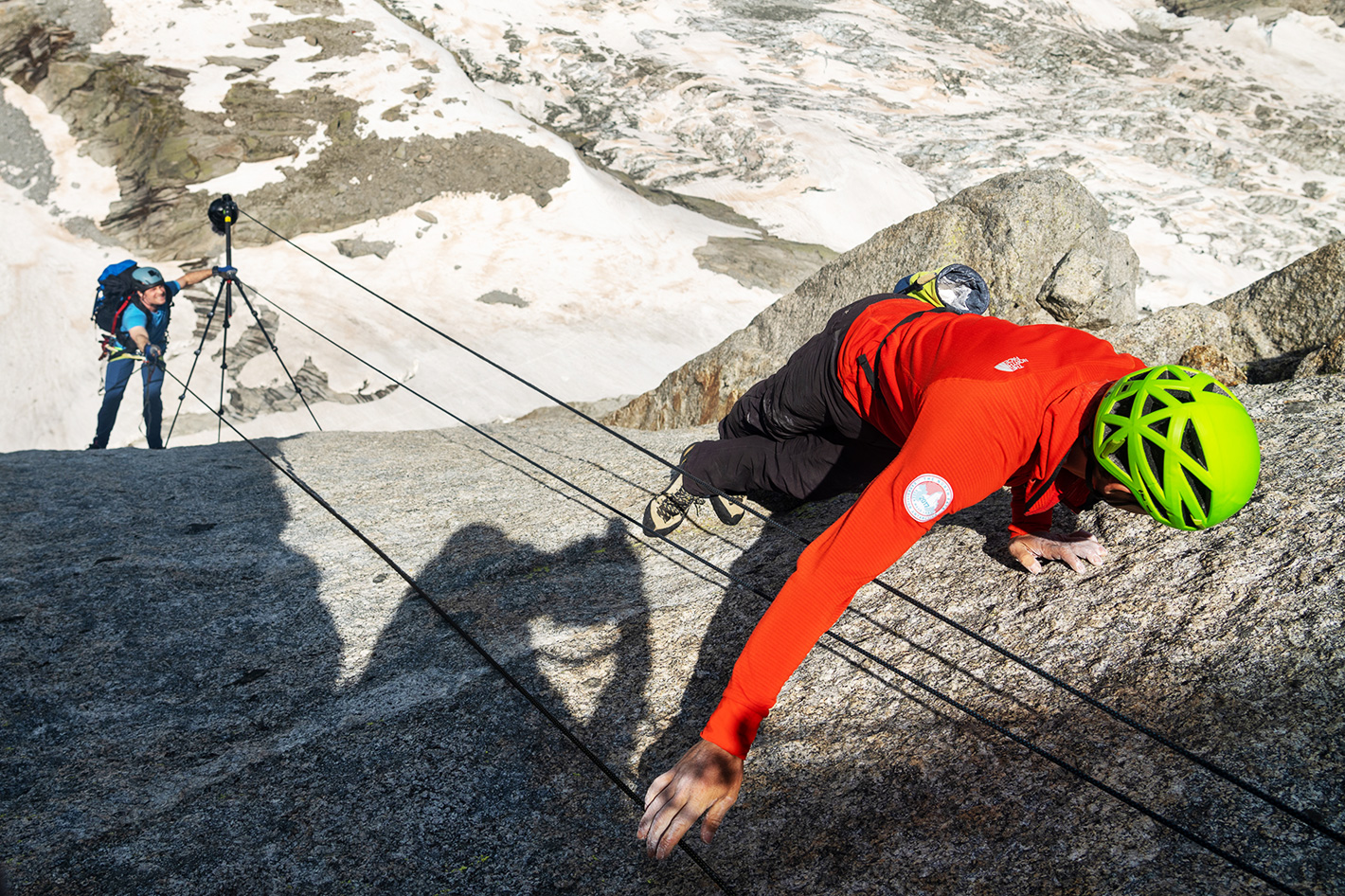 To record the experience in 3D VR, they needed a camera with left and right eyes in all directions. The Insta360 Titan was the VR camera of choice for the production, as it has 8 lenses and shoots 10K 3D video using Micro Four Thirds sensors.

Griffith initially had reservations about shooting with the Titan due to the extreme shooting locations. Using a 5.5kg camera would pose additional logistical and physical challenges—as the filmmakers would have to climb with the camera to get the shots of Honnold.

But as Griffith explained, it was worth it because “When you’re trying to recreate reality for the viewer, you need to shoot with the best capture system available and for the moment that is the Titan. Bigger sensors, better optics and the ability to shoot at 10-bit changes the game for me. The better the capture quality, the better the experience for the viewer. Even though it was a huge logistical and physical effort to bring the Titan into these locations, I’m really glad we did.”

Rigging the Titan for climbing

Once the team decided to use the Titan, the next challenge was designing a rigging system for hanging the camera next to the cliff face. “The rigging for the Titan, or for any VR camera for that matter, is pretty complicated. Overall, the rigging system probably doesn’t look like much, but it took a year to fine tune and is an integral part of the entire production. But that’s what I love about VR—the constant problem solving,” said Griffith. 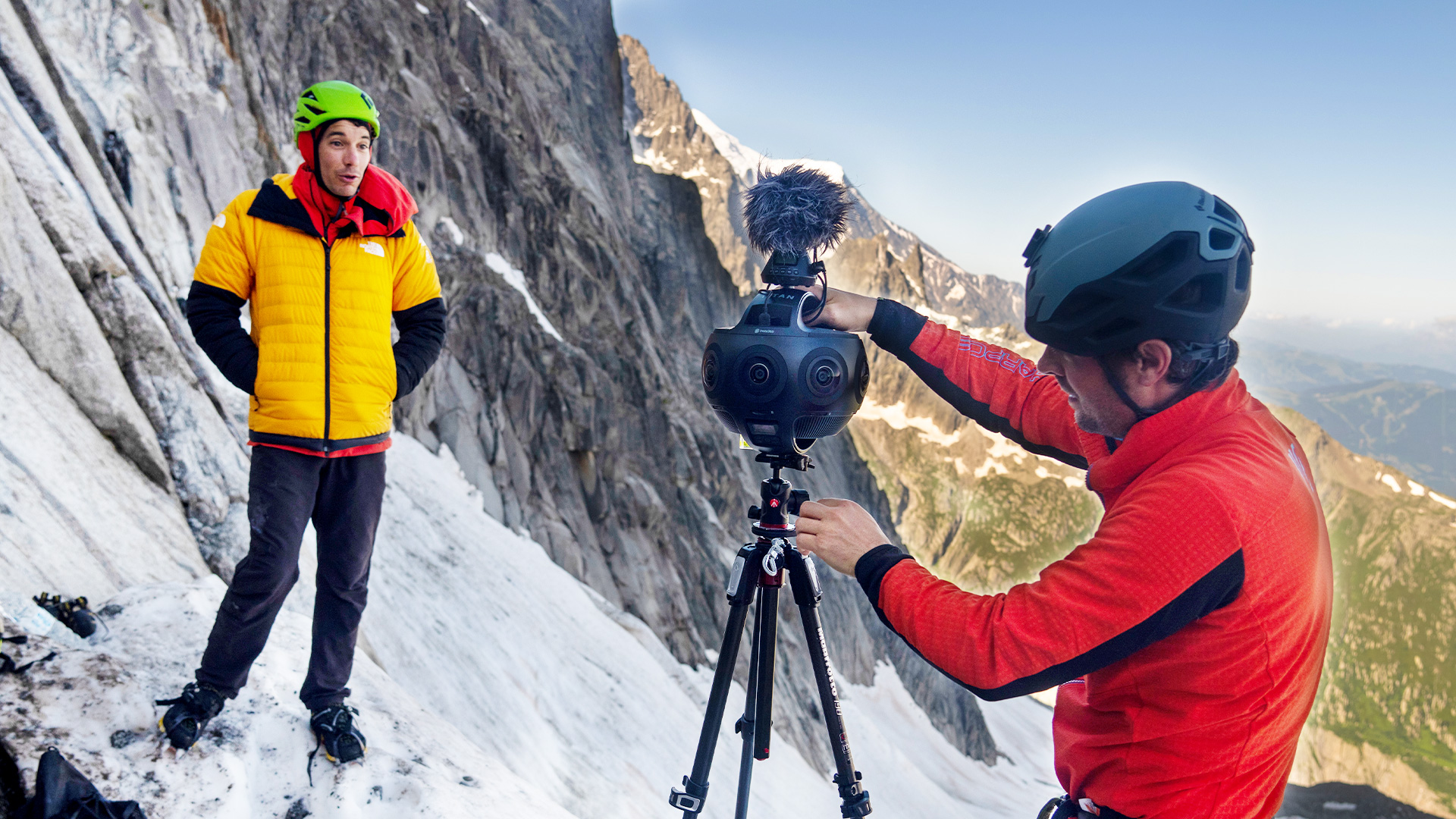 According to Griffith, there were three main requirements for the rigging system: 1) The camera needed to hang as far out from the cliff face as possible 2) The rig couldn’t sway in the wind, and 3) The rig needed to be carried in a backpack and deployed very quickly.

Another challenge was trying to stay out of the shot, since the camera truly captures everything, and nothing could be faked or hidden in post-production. This, like everything about the production, required some serious teamwork. The Insta 360 Titan’s Farsight live monitoring system also enabled Griffith to set up the camera and then control it from a distance away. 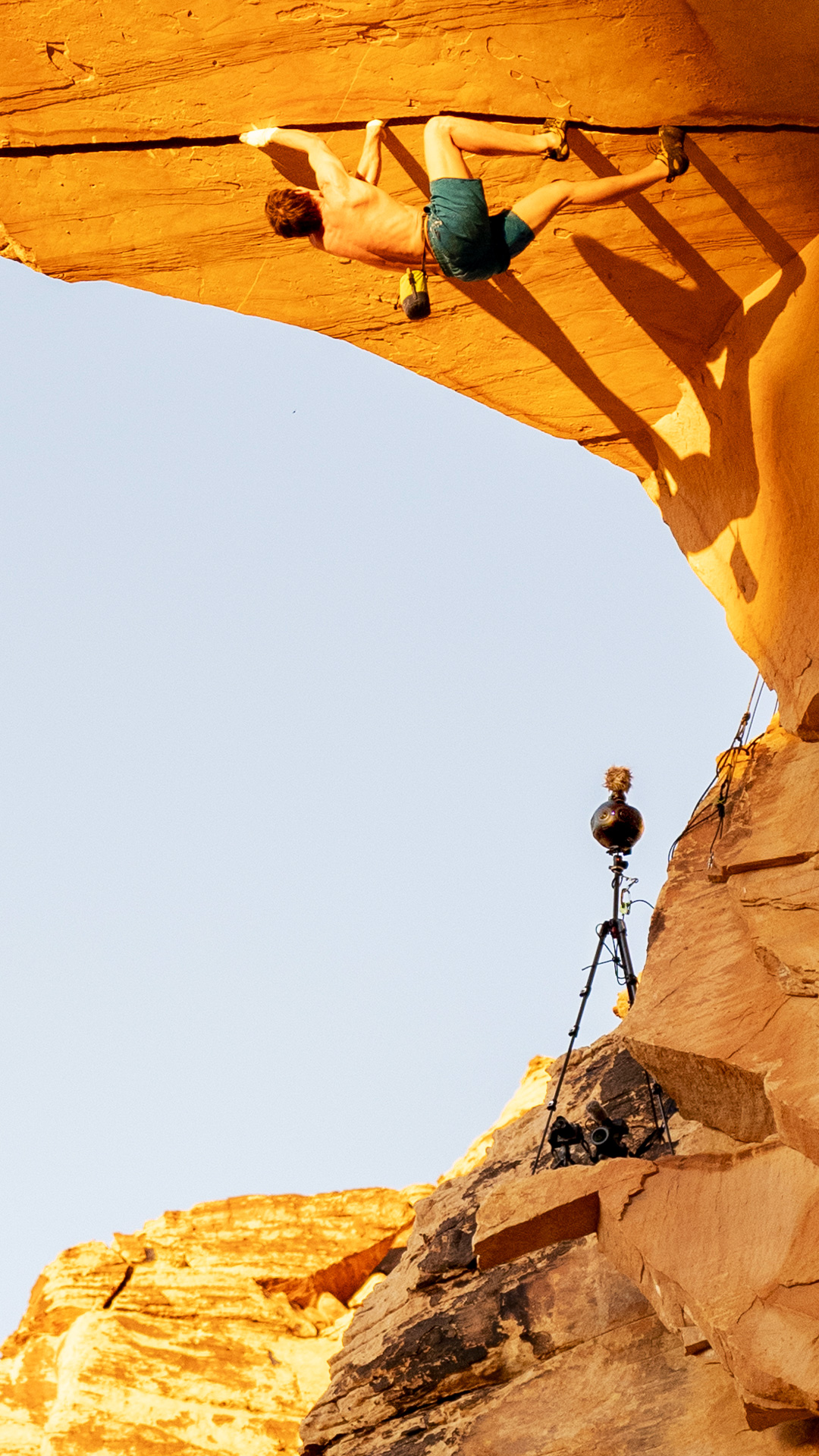 “This was without a doubt the most complicated production I’ve ever done in my life both logistically and physically. In order to pull this off, we had to work as a close-knit highly-specialized team, otherwise it just wouldn’t work—we had to move fast and efficient,” Griffith explained.

As for what viewers can expect from the film, Griffith teased, “I can’t think of a more powerful soloing experience to give to the viewer. This is a deeply personal journey for the viewer as well, it’s not just an epic one.”

If after watching Alex Honnold: The Soloist VR experience and the behind-the-scenes documentary the idea of rock climbing grows on you, the best and most safe way to try it yourself is through The Climb game, which recreates the reality of free soloing in VR. Unfortunately, again, only the original game is compatible with PCVR, as The Climb 2 is exclusively for Quest, meaning many people are excluded from the experience.