Chris Moore, executive producer of Project Greenlight, has long been fascinated by the way different creative visions can take projects in wildly different directions. The Chair is a documentary series that follows two directors as they develop their first feature-length films based on the same original screenplay. Over the course of ten episodes, viewers are invited to join Shane Dawson and Anna Martemucci as they each bring their own artistic vision to life.

Rob Henry, who’s recently partnered with The Chair’s DGA-award winner Anthony B. Sacco and Director of Photography Dan Kavanaugh to form INTERSECTION, led the creative team in editorial, which was tasked with cutting thousands of hours of behind-the-scenes footage into ten, hour-long episodes. The team, including Editors Dave Henry and Jon Berry and Graphics Artist Austin Brown, began the project working with Avid but soon realized that Adobe Premiere Pro CC would allow them to handle the massive amount source footage more efficiently.

After airing on STARZ in 2014, the series is now available on iTunes, Amazon, Google Play, Vudu, Starz Play, and Starz On Demand and is available to purchase on DVD February 17, 2015. 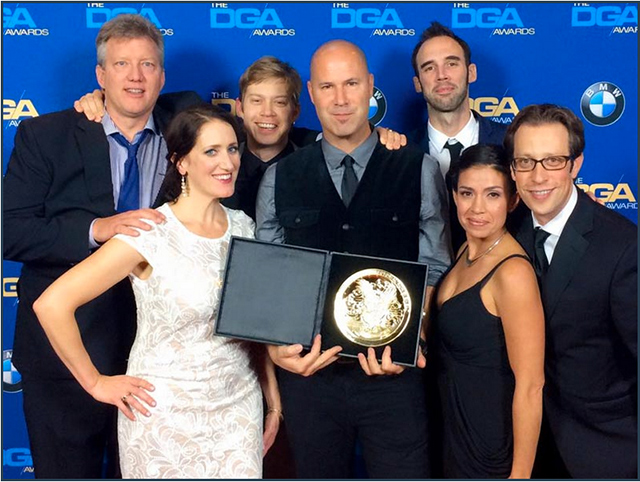 Adobe: What is The Chair?
Rob Henry: The Chair is really Chris Moore’s brainchild. It’s essentially a 10-hour documentary series following first-time filmmakers Anna Martemucci and Shane Dawson from the first days of preparing their films to distribution and theatrical release. Both were given the same script – Dan Schoffer’s original screenplay How Soon is Now – a $650,000 budget, and the same location, Pittsburgh, Pennsylvania. They could change dialog and adapt the screenplay however they wanted, the only real rule was that they had to keep the character names the same so that audiences could follow changes.

Dave Henry: It was really interesting to see how both of the directors handled the experience: both the pressure of trying to shoot their first films and the pressure of being on camera as the subject of a documentary. Anna Martemucci created a very indie-friendly coming-of-age story that she called Hollidaysburg. Shane Dawson, a familiar face on YouTube with millions of followers, took his film Not Cool in a comedic direction.

The Chair is not only a documentary about these directors’ journeys, but also a means for analyzing the types of decisions creators make and what impact those decisions have on the final product. 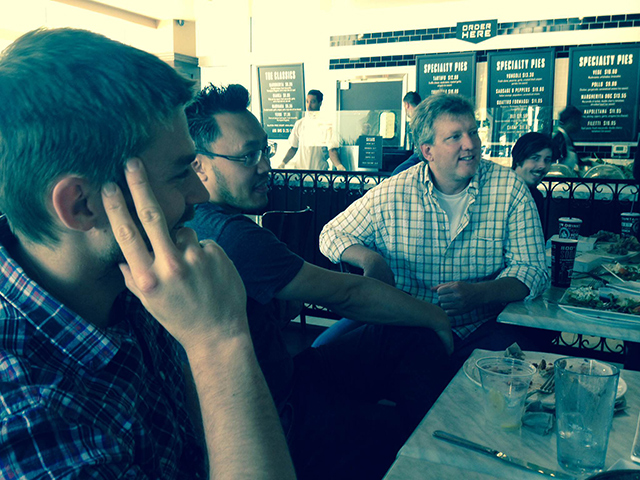 Adobe: How did the production differ from other reality shows?
Rob: Although there is an element of competition involved, The Chair isn’t anything like a reality show. It’s very much an independent documentary at heart. Everything was shot beautifully, often with cameras far enough away that people could forget about us.

On the post-production side, it also meant that we were working on an independent budget and schedule. We didn’t have the money for simultaneous production, so we only started editing after principle photography had largely wrapped.

Adobe: Why did you decide to work with Adobe Premiere Pro CC?
Dave: When we first received all of the storage drives with thousands of hours of footage, we all started wondering, “How in the world are we going to do this?”

Rob: We were working with students at Point Park University in Pittsburgh to help with data-wrangling. I actually started having them transcode and prep footage in Avid, but we quickly realized that there was way too much footage to continue that way. This is an independent project, and we just didn’t have the manpower, storage space, or budget to transcode every hour of footage.

About a month before editorial was going to start, I decided that we could avoid transcoding media by working with Premiere Pro instead. We worked with multiple formats—everything from Sony F5 and Canon 5D cameras to cell phone video and Skype screen recordings. With Premiere Pro, we didn’t have to transcode a thing. We could just throw a clip on the timeline and start editing. That means no wasted time and no extra storage. Once everyone realized the economics of it, we were all on board for Premiere Pro. 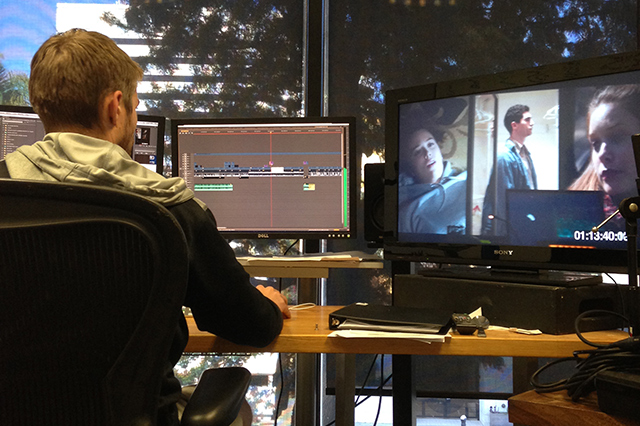 Adobe: Did any other features in Premiere Pro make your workflow more efficient?
Rob: The ability to automatically sync multiple cameras through audio was simply incredible. Not all of our cameras had time code, so we couldn’t rely on that. In addition to multiple cameras, we had two field recorders following each director and giving us eight to ten audio tracks per day. In Avid we would have had to import audio and manually sync each recorder to each clip, which would have basically doubled our work.

Adobe Premiere Pro automatically syncs all audio and video clips based on the audio alone. We could have our assistants sync all the footage for one day in 20 minutes. It was an incredible time saver.

Dave: When we’re working with so many cameras, having these multicam sequences all ready for us made it a lot easier to edit. We could search for a timecode from the hot sheet and immediately see all of the footage available to us. We could quickly determine if we had anything to work with or if we needed to edit the episode in a different direction.

Adobe: How did you start piecing together the footage into ten episodes?
Dave: We were working with about 3,000 hours of footage, so there was no way for us to review every minute of it. We generally worked from hot sheets, which summarize the sequences shot that day and give timecode-specific notes about major events of the day. The events could be anything from the director arriving on set to a producer opening up in front of the camera. Based on the hot sheets, we’d pick out scenes that sounded interesting and piece them together on paper into a general roadmap for all of the editors. While it wasn’t as daunting as reviewing the filmed footage, it was still a lot of information to get through—we probably had at least 500 total pages of hot sheets. 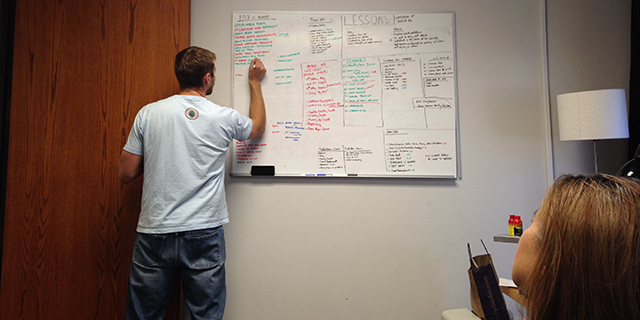 Adobe: Who else did you work with on the production?
Rob: We worked with folks from Tunnel Post, who have memberships to Adobe Creative Cloud for teams. They had the flexibility to add licenses for all of us working on The Chair for the duration of the project—a simple and very cost-effective solution. This gave us access to Premiere Pro CC, as well as Photoshop CC, which we used for subtitles and graphics, and After Effects CC, which we used extensively for all sorts of visual effects.

Adobe: What type of graphics work did you do with Adobe After Effects CC?
Brown: I worked on about 1800 renders for The Chair, including lots of stabilization, logo replacements, and some incredibly complex intro sequences. One thing that every episode involved was titles, which identified our large cast of characters to the audience. To save time, I did the first pass using non-color-corrected files while Rob did the final edit. I’d use the camera tracker to track titles to the frame or person. Once the clip went through the final edit and color correction, I’d use Dynamic Link to pull the footage from Premiere Pro into After Effects, where I could usually just copy and paste the titles into place. It was so much faster to use Dynamic Link and not have to worry about exporting every single title.

Adobe: What’s next for everyone?
Rob: I would love to see a second or third season of The Chair. Now that we know how easy it is to work with Premiere Pro and how much smaller our data footprint is when we don’t have to transcode, we could really start pushing things technically, like moving into 4K footage.

Dave: The lessons that we learned from The Chair have convinced us that Premiere Pro is the way to go. Knowing that we can automatically create a multicam sync through audio is huge for us, and it’s something that we plan to do all the time now as part of our workflow. 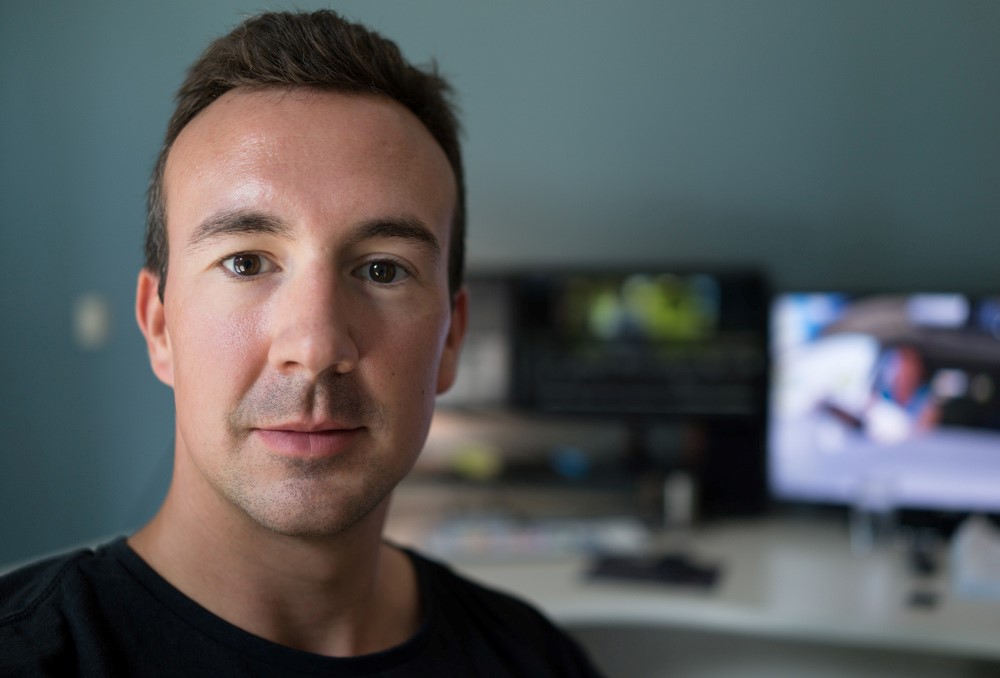