Rise and Shine Films describes the video content it produces as “lovingly handcrafted videography.” In addition to client projects such as commercials and corporate videos, the small team also enjoys working on its own projects and trying out new video solutions. Recently, they created the short film Balloon for the Ikan Fly Smartphone Film Contest. The sweet film about a little girl who dreams of flying won the grand prize in the competition, and was also the Best Cameraphone winner in the My RODE Reel 2015 international short film competition.

Rise and Shine Films describes the video content it produces as “lovingly handcrafted videography.” In addition to client projects such as commercials and corporate videos, the small team also enjoys working on its own projects and trying out new video solutions. Recently, they created the short film Balloon for the Ikan Fly Smartphone Film Contest. The sweet film about a little girl who dreams of flying won the grand prize in the competition, and was also the Best Cameraphone winner in the My RODE Reel 2015 international short film competition.

The making of Balloon was a team effort at Rise and Shine Films. Jacqueline Passos wrote and directed, assisted by the company’s founders Philipp Andonie and Manuel Imboden. Philipp also guided Jacqueline through editing and Manuel produced and served as the director of photography. Sven Brauchli created a behind the scenes video. Here, Imboden and Passos talk about how they used Adobe Premiere Clip and Adobe Premiere Pro CC to edit the award-winning short film.

Adobe: Tell us about Rise and Shine Films.
Imboden: We’re a small production company in Bern, Switzerland with four full-time employees. We do client work for all sizes of businesses in Switzerland, and also provide production services for other agencies and production companies in Europe, the United States, and Asia. Over the past two years we’ve focused on growing our skill set and the reach of our network.

Adobe: What size productions do you generally focus on?
Imboden: Most of our productions are in the medium-size range and we try to be as cost efficient as possible. We try to maximize every dollar the client spends on screen. We also love to make narrative short films whenever time and money allow.

Adobe: What was your production workflow?
Passos: We had a day and a half to prepare for the shoot, and one day for shooting. The first two scenes went well, but we ran into challenges in the park. There were many people there, which made it distracting and noisy, so we were not able to record any audio and made the decision to do all of the audio recording in post. After recording the mom’s voice-over monologue and blending it in with the fantastic piano piece by Carly Comando, we realized that another layer of audio might distract from the story being told, so we decided to not add any foley or ambient sound.

Imboden: We shot the short film using an iPhone 6 with Filmic Pro because it could capture a higher bitrate than the device’s native camera app, then edited in Premiere Clip on the iPad. Philipp assistant edited, using Premiere Clip to look through the content and note which clips we could use. We didn’t keep any logs while shooting, so all of the selection happened in Premiere Clip. Jacqueline then used Premiere Clip to do the rough cut.

Adobe: What did you like about working with Premiere Clip?
Passos: I took a very iterative approach and just started playing around with the footage. What I liked about Premiere Clip is that it was really easy to edit with. Having a few years of experience editing in Premiere Pro CC, I felt right at home with it. When I wanted to change the sequence of the clips, I could simply drag and drop them to where I wanted them to be. Freely experimenting with the sequence of the clips allows you to see how the pacing of the story can evolve. When I was finished with the rough cut, I handed it back to Philipp who sent it to Adobe Premiere Pro CC for further refining and editing. 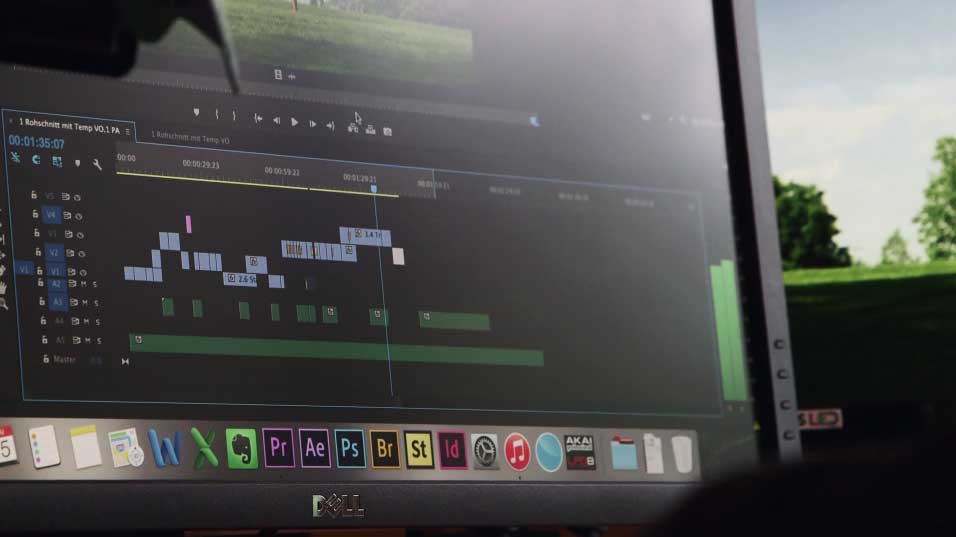 Adobe: What other Creative Cloud apps did you use?
Imboden: We did all compositing in Adobe After Effects CC, such as removing people from the background and adding lens distortion. We also used After Effects for stabilization of some shots. We created all of the graphics in Photoshop CC and used SpeedGrade CC to color correct the constantly changing light situation in the park and achieve the look we wanted. One fun thing I did in color grading was changing the big balloon’s color from orange to yellow. We couldn’t find a yellow balloon of that size on short notice, so that was one of the rare moments we agreed to fix it in post. Finally, we exported the short film using Media Encoder CC.

Adobe: Have you worked with any other Adobe Creative Cloud mobile apps?
Imboden: We’ve been using Creative Cloud mobile apps for a couple of years now. Starting with Color CC and later Hue CC and Shape CC ((all three now part of Capture CC), we’ve found them to be very useful for any task that requires you to be on the move. A very common scenario is when you arrive at a location for the first time in preproduction and inspiration strikes. An app that allows you to capture and store colors, shapes, and movements in that moment in a simple way is priceless and will allow you to carry the essence of your inspiration into the final product more easily. We’re excited to use Adobe Capture now, which combines all of the features of the aforementioned apps into one.

Adobe: How do you see incorporating Adobe mobile apps into your workflow moving forward?
Imboden: We anticipate that mobile editing on the front end with Premiere Clip may become a huge part of our workflow in the future. Rather than clients having to wait to see a rough cut of their commercial, with Premiere Clip we can start editing on set or on the drive home, and have something for them to see half an hour later.

Passos: The strength of Premiere Clip is in the ability to shoot and edit easily and quickly with the iPad, which makes it ideal for location scouting for example. Instead of just taking pictures, you can record the action and assemble the shots right away, which makes it much easier to anticipate problems, add comments, and explain the specifics of the location.

Adobe: What’s next for Rise and Shine Films?
Imboden: We have a lot going on at the moment. Growing our client work and commercial business is of course at the core of our company’s interests, but we are also stepping up our efforts in producing narrative, fictional content of various flavors. One big project we are developing is an interactive web series called Nordwest, that’s scheduled for release within the next two years.

Of course we’re also working on smaller short form projects, like Balloon. These allow us to freely experiment with ideas and technologies, which translates into more creative approaches for our client work. We’re shooting one short film in December and another one early next year. If time allows, we’d also like to make another smartphone short film for the upcoming Mobile Motion Smartphone Film Festival 2016. There’s a lot happening right now, which is very exciting!