“Snapped: She Made Me Do It” reality crime series cut exclusively with Adobe Premiere Pro CC

Joke Productions, founded by the husband and wife team of Biagio Messina and Joke Fincioen, creates and executive produces unscripted TV shows, documentary series, and reality television for major networks. Like many people in this industry, they started working in a one bedroom apartment. Today, they operate a 7,000 square foot studio located in Hollywood, California near Universal Studios.

Joke Productions, founded by the husband and wife team of Biagio Messina and Joke Fincioen, creates and executive produces unscripted TV shows, documentary series, and reality television for major networks. Like many people in this industry, they started working in a one bedroom apartment. Today, they operate a 7,000 square foot studio located in Hollywood, California near Universal Studios.

After working with Final Cut Pro 7 for years, the company switched to Adobe Premiere Pro CC to edit its new Oxygen series, Snapped: She Made Me Do It. Joke Productions workflow is now 100% Adobe Creative Cloud and the team has declared Premiere Pro CC “reality ready.”

Fincioen: A few days later we were on our way to Real Screen, a large unscripted TV convention, where we pitched the show to the female networks and crime networks. There was a lot of interest and our agents ultimately agreed to make the deal with Oxygen. The process from that point took two-and-a-half years, but resulted in the series premiering on Oxygen on September 9, 2015. 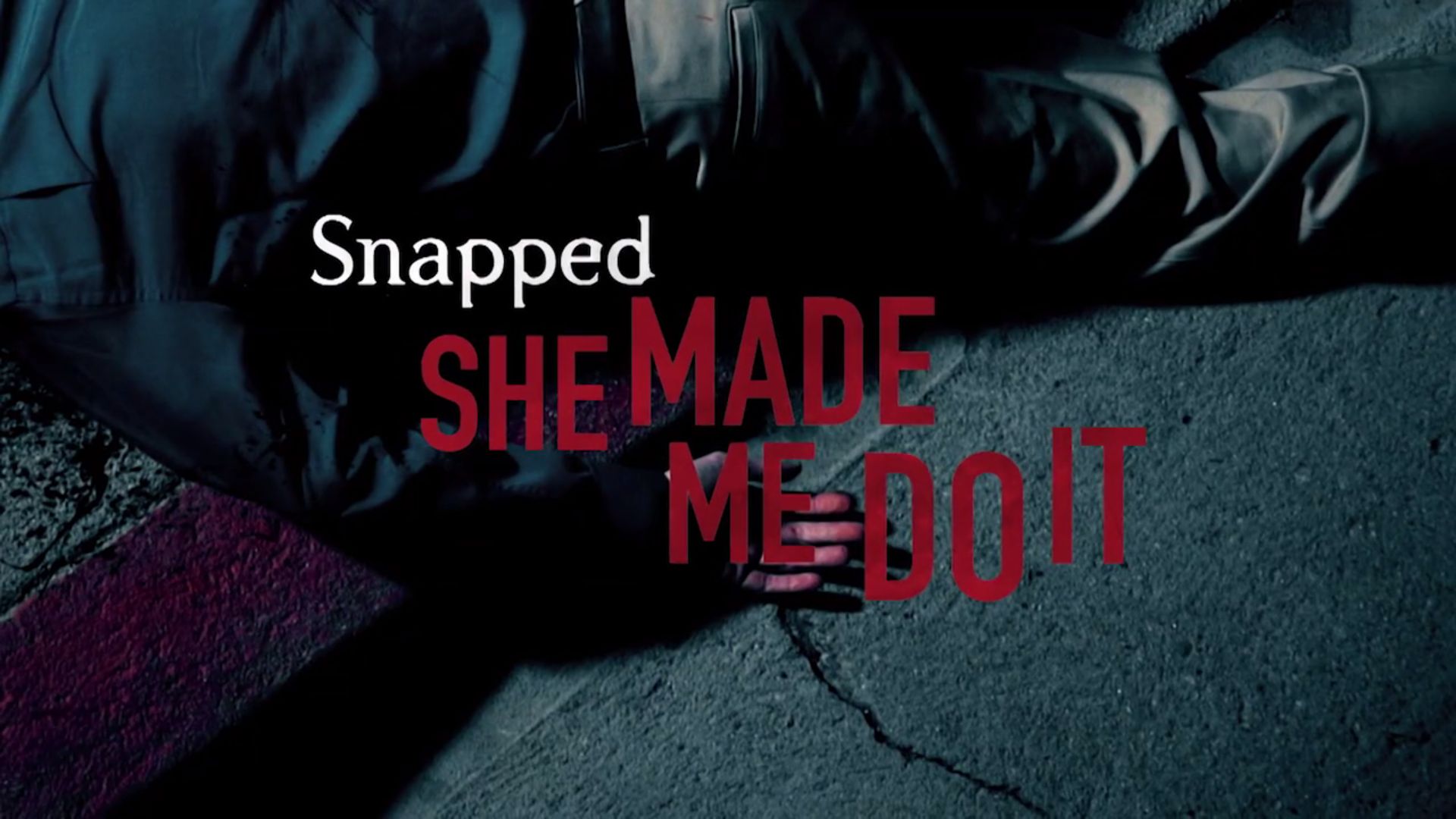 Adobe: What is your editing background?
Messina: I’ve been editing for nearly 20 years, and I’m the lead and sometimes only editor on all of our TV pilots and pitch tapes. I also do everything from lead editing to polishing on our TV series.

Fincioen: I’ve always edited from a story producer perspective, doing string outs and using editing timelines as more of a workbench. When we got our first gig as showrunners we had to use Avid, but after the show got picked up we convinced the network to let us use Final Cut Pro. That’s how we started building our careers.

Adobe: How did you start working with Adobe software?
Messina: We’ve always experimented with software to make shows look like they are bigger budget productions than they really are. Early on, we realized that we could make our shows look much better by combining Final Cut Pro with Adobe After Effects to composite titles and graphics.

Adobe: Why did you start looking for a new NLE?
Messina: Networks trusted us to make our own TV shows and we were doing really well, but then Final Cut Pro X was released and it wasn’t what we were expecting.

Fincioen: In an industry that is already running based on a certain way to edit and organize projects, it isn’t feasible to make everyone change how they think, which is what Final Cut Pro X required. So we kept working with Final Cut Pro 7, with operating systems that were several versions behind. We knew our options going forward were Avid or Premiere Pro.

Adobe: Why did you end up switching to Premiere Pro?
Messina: Adobe told us that Premiere Pro could already do most of what we needed to support the intense work that we do. In addition to learning how we worked, Adobe implemented some of our suggestions, such as the “export selected to project” command, in the software. 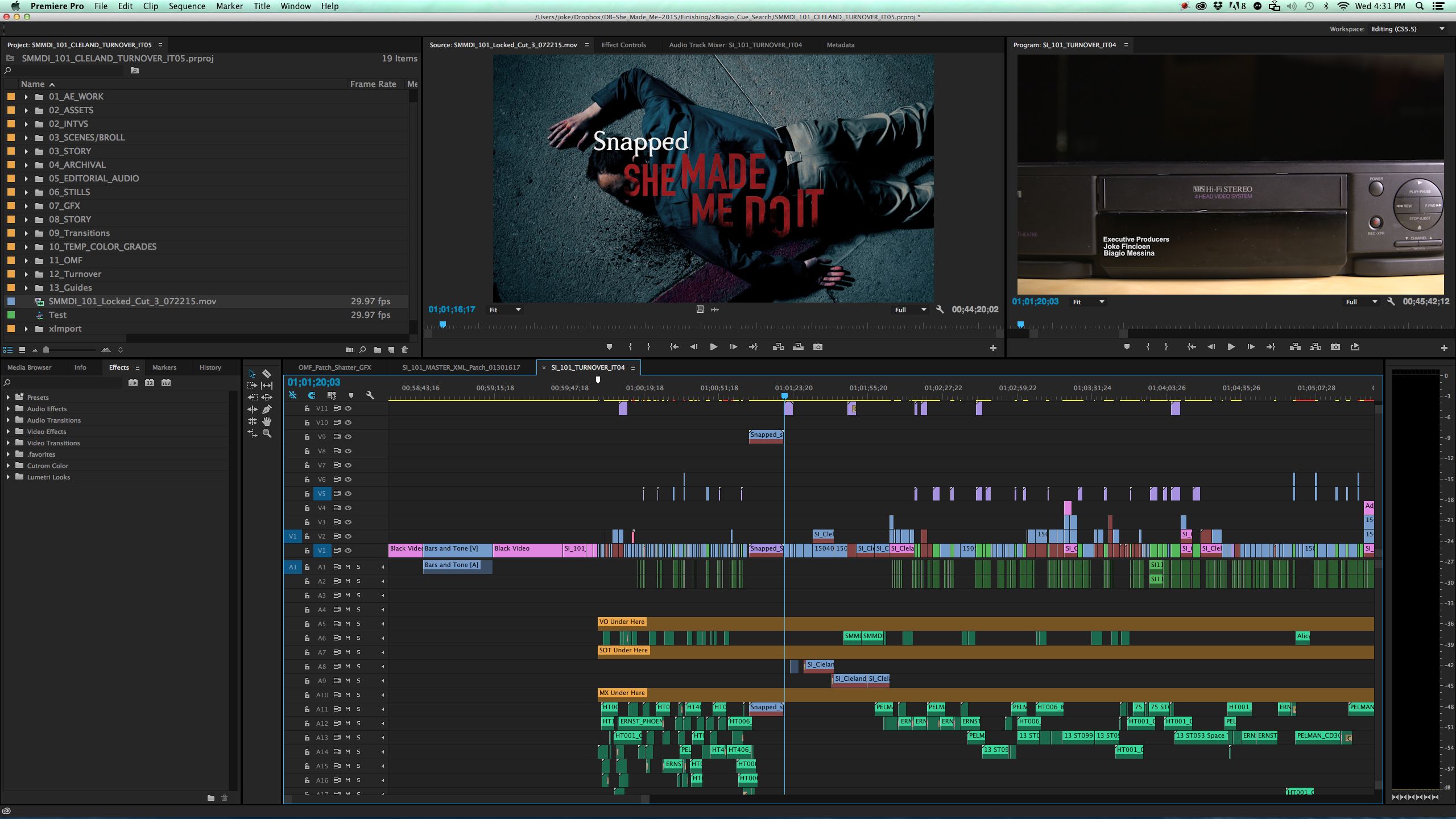 Adobe: What do you like about working with Adobe?
Messina: Adobe cares about getting things right for the pro market. It’s clear that people who work at Adobe want to make a product they are proud to put out in the world. We started cutting all of our pilots and presentations on Premiere Pro. What I could do in half a day in Premiere Pro and After Effects would have taken twice as long on any other platform. I would fly through sizzle reels, pitch tapes, and cold opens for pilots.

Fincioen: After more than a year, we used it to cut a two hour special. It involved a few editors, a handful of people in post, and some compositing. After that success, we rolled into Snapped: She Made Me Do It for Oxygen and decided to go for it with Premiere Pro.

Adobe: Why are unscripted projects challenging from a production and post-production standpoint?
Messina: Unscripted projects are among the most demanding types of projects for most editing systems. We often work with thousands of hours of footage, up to 20 or more cameras, loads of graphics, heavy visual effects for our reenactment shows, and up to 50 audio tracks. We also have 20 or 30 people, including editors and story producers, connected to the content. With Premiere Pro, we can be more creative because it works the way we need it to work instead of forcing us into a pipeline.

Fincioen: Cutting an average scripted TV show is definitely less taxing on an editing program. We have heavy, complicated timelines so it was important to find a post solution and workflow that was right for us, based on the kind of TV shows we make.

Adobe: What other Adobe Creative Cloud apps do you use?
Messina: Several of our editors know After Effects and have a good time creating anything from muzzle flashes for guns to dramatic time-lapse skies and subtle lighting effects. They have the luxury to try new things and the show looks vastly better for it. The integration between Premiere Pro and After Effects is amazing.

We also use Adobe Prelude CC every day for ingesting footage. Every single piece of footage for Snapped: She Made Me Do It came in through Prelude. We’ve colored one pilot with Adobe SpeedGrade CC and we use Adobe Audition CC for some audio editing, including our podcasts.

Adobe: What did you learn working with Premiere Pro on the series?
Fincioen: We learned that Premiere Pro is officially reality ready. We’d now be happy to do any reality show or documentary series using Premiere Pro. Our investment in Adobe Creative Cloud has paid off in terms of both time and money.

Messina: The series had a ton of graphics, photo-real visual effects, multiple cameras, lots of editors and story producers, and crazy fast turnaround times. Building multicams is something of a joy in Premiere Pro. It’s very easy to swap in other camera angles after the fact if you missed one. The handoff process was also smoother than previous shows. If you like to go to town editing, building graphics, and doing your own sound mixing and color correcting, Premiere Pro is for you. We’ve tried to make Adobe Creative Cloud our base for everything, because the better we get to know it the more we get out of it.