Next Event: Saturday, May 30th

Adobe rolled out the new Adobe Premiere Pro at NAB Show and here’s your chance to see what the fuss is all about and meet the man in charge of the program, Al Mooney. Always one of our most popular guests, Al will show the improvements for editors with the tool, along with the new “Project Candy” and will hang around to participate in the editorial workflow discussion panel.

Zack Arnold has been a professional editor for over 15 years now currently one of the editors for the hottest program on broadcast television right now, FOX’s “Empire.” He’s previous edited on ABC “The Black Box,” USA “Burn Notice,” and FOX “Glee” among many other credits. One year ago he decided to start Fitness In Post to help get editors and really anyone in production, to get up, get active and better our health in what is often a sedentary lifestyle. Zack will be presenting some Fitness In Post tips and advice and then participate in the Editorial Workflow discussion panel.

Jason Druss is a longtime professional colorist and cinematographer hailing from Philadelphia. He’ll be presenting the all new Blackmagic Design Davinci Resolve 12 which has moved squarely into the Editorial world with the latest updates including incredible multi-cam and new audio finishing tools. You’ll get a first hand look at the new features and toolsets that were introduced at NAB.

Scott Simmons started as a freelance editor in Nashville giving him the opportunity to work on a wide range of projects from music videos and live concerts to commercials and television programs, industrial and corporate pieces to documentaries and the occasional narrative film. He has worked on projects from artists including Taylor Swift, Kenny Rogers, Kenny Chesney, Ronnie Milsap, Rodney Atkins, Mercy Me and Rhonda Vincent to name a few. In 2005 Scott created The Editblog which is now located as part of Pro Video Coalition, a website that brings together some of the best writers in the film, video and technology space. Someday he hopes to edit on a beach with a touch screen device, a wireless hard drive and a Red Stripe

The Discussion Panel will focus on the fact that Editors today have a lot of options and there’s also a lot of confusion on what makes the best workflow for projects. Our Editorial Workflow discussion panel will focus on the collaboration changes we see in the industry along with what Scott, Zack, Al and Jason are seeing in terms of workflows for various types of projects and in various locations around the globe. Of course, the entire discussion panel will be open to Q&A. This is a fantastic opportunity to bring your questions, particularly with someone on the panel like Zack who has edited both major broadcast episodics along with multiple films and documentaries and Scott who has edited numerous music videos and documentary projects.

Creative Networking, Sponsor Showcase | The event starts out with Networking, Drinks (cash bar) and a Sponsor Showcase featuring Avid and Flanders Scientific. Mix and mingle with your fellow Atlanta Creative, get up close and personal with the sponsors and maybe ask them about NAB, and meet our Guests. It’s going to be a great evening of discussions about Editorial Workflow and getting yourself more active!

Dinner & Drinks | Dinner will be a buffet of small plates allowing you walk around and say “hey y’all!” to everyone around you and there will also be a Cash Bar.

Demonstrations & Panel Discussion | We’ll call everybody to order in the main presentation room for the demos and then join in the discussion “Editorial Workflow.” Bring your questions as there will be a continual Q&A with the audience.

Raffle | Each attendee will receive TWO tickets with entry. You can then purchase additional tickets at the Raffle Table. We may have a premium item that will be raffled off at the end of the event, if so, it will be announced at the event. We will begin pulling tickets at the beginning of the main event at 7:00pm so don’t be late! You MUST be present when your ticket is called. Raffle open only to 18 years and older. 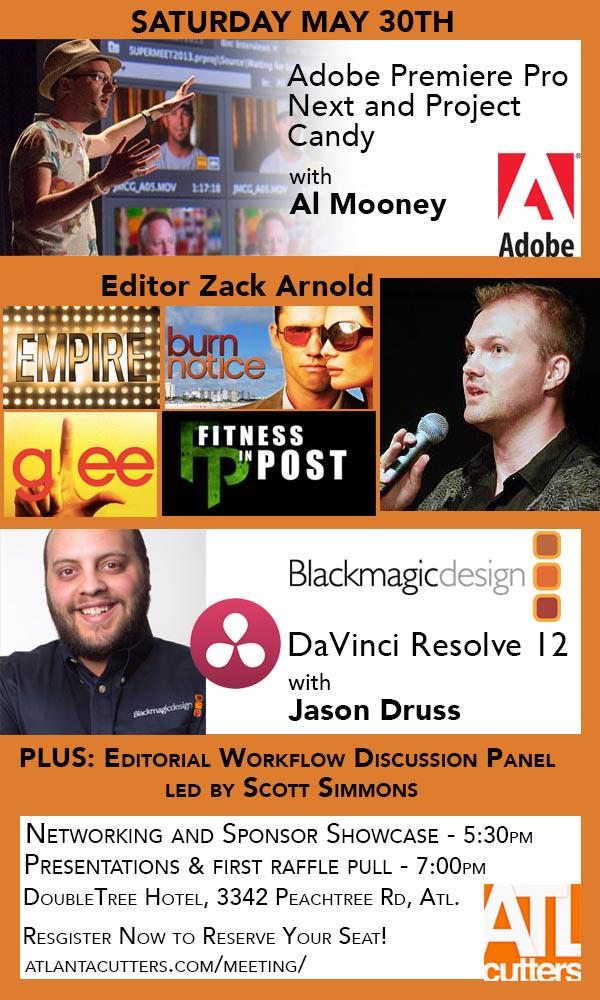