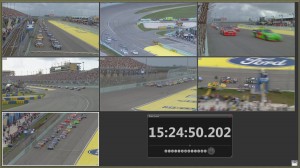 “The NASCAR race environment presented the perfect challenge for Telestream to provide high-quality video capture and instant synchronous playback in a time-critical situation,” said Barbara DeHart, Vice President of Marketing at Telestream. “Together, Pipeline and Replay provide NASCAR or any sports organization with a cost-effective, easy-to-use system for instant event review and analysis.”

“The instant replay system that Telestream will be providing NASCAR next season will enable our officials to perform their jobs in an even more efficient and time-sensitive manner,” said Robin Pemberton, NASCAR Vice President of Competition. “Having instant access to that many camera angles featuring such high quality video will be a terrific addition to our race weekends.”

Telestream’s Pipeline HD video capture system simultaneously acquires multiple camera feeds in high-quality Apple ProRes 720p as well as other HD and SD formats. Video feeds are delivered to shared storage where they are available for immediate playback, editing during capture, or transcoding to other file formats.

Highlights of the Pipeline video capture and Replay system developed for NASCAR include :

Telestream is demonstrating Pipeline and the new instant Replay system at Sports Video Group’s League Technology Summit in New York City this week. For more information about Telestream and its products, visit: http://www.telestream.net.

Telestream provides world-class live and on-demand digital video tools and workflow solutions that allow consumers and businesses to transform video on the desktop and across the enterprise. Many of the world’s most demanding media and entertainment companies as well as a growing number of users in a broad range of business environments, rely on Telestream products to streamline operations, reach broader audiences and generate more revenue from their media. Telestream products span the entire digital media lifecycle, including video capture and ingest; live and on-demand encoding and transcoding; playout, delivery, and live streaming; as well as management and automation of the entire workflow. Telestream corporate headquarters are located in Nevada City, California. The company is privately held. For more information, visit http://www.telestream.net.