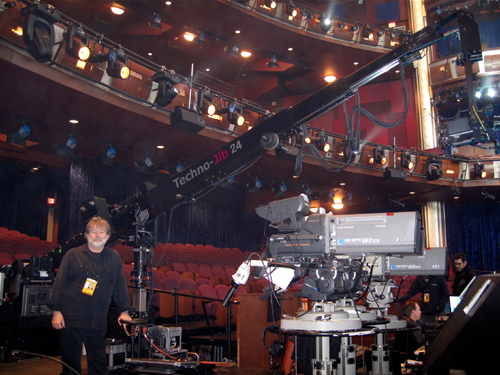 Hollywood, California. For the third year in a row the Telescopic Techno-Jib’s captured the glitz and glamour at the Academy Awards. “We began to use this unique tool three years ago,” explains Ted Ashton, one of the most recognized Awards show camera operators. “The area backstage is really congested. Dollying around with a regular jib is difficult. With the Techno-Jib, I was able to move in an out and create extremely productive images

This year, Academy Award directors Roger Goodman and Allen P. Haines chose to use two Techno-Jibs to capture as much of the reactions of award winners as possible. “Mark Hunter manned the one in the middle of the house, “explains Ashton. “He covered wide establishing shots going into and out of the action.

“I was on the stage, following or leading the winners as they moved center stage to accept their awards,” he adds. “The Techno-Jib is perfect for this kind of action because of the additional telescoping capabilities. I could jump out quickly and capture the moment intuitively, not only moving up and down, left and right, but in and out, then retract the arm so that I would be out of the wide shot.

“Some operators like to have a second person manning the Techno-Jib for the in and out moves,” he says. “However, in situations like an awards show, when moves have to go quickly and are really about reacting to what is in front of the lens, I find that it is easier for me to create a smooth move on my own.”

With their innovative technical options and affordability, Techno-Jibs are quickly becoming the preferred telescopic camera jib arms around the world. The T24 extends from a minimum reach of 9 feet (2.7 meters) to a maximum of 24 feet (7.3 meters), enabling shots that could only be achieved previously with the use of a telescoping crane. The arm travels at speeds of up to 5 feet per second and a unique “Soft Stop” feature guarantees an automatic smooth stop every time. Units come standard with a Mitchell Mount adapter and can easily accommodate most remote heads under-slung or over-slung. Adjustable weights ensure jib arm balance with most popular remote head/camera combinations.