Affinity Publisher is now available, and with its introduction Serif revolutionizes the way different apps work, using the StudioLink technology. It’s a game changer, offering the most fluid workflow ever conceived. 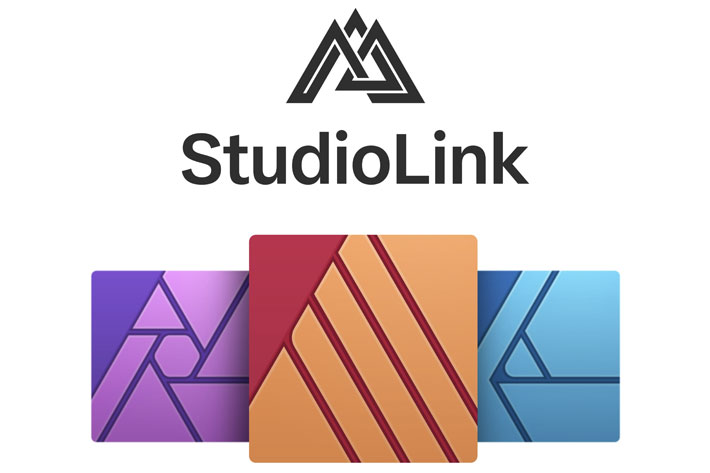 With the launch of Affinity Publisher, Serif has the key elements of its Affinity Suite in place, while Managing Director Ashley Hewson says “we’ve only just started”. Is a video editor coming next?

I’ve asked this question before – will Serif move into the video editing area?  – and the answer is, apparently no, despite the fact that Serif had, previously, one app, Serif MoviePlus, a Non-Linear Editor that allowed both professional and home users to edit digital video. With the Affinity range, which is a completely new adventure for the company, there seems to be no place for moving images, as the company has just introduced the third element of its Affinity Suite: Affinity Publisher.

Publisher, another “no subscription” element of the now official Affinity Suite, joins the Designer and Photo apps to create a set of tools that will make the work of professionals much easier. In fact much easier than expected, as I discovered while playing with my copy of Affinity Publisher. For months, during the public beta period, joined by more than 200 thousand users, we were told that the icons on the top left side of Publisher and the other apps would allow to move from one app to the other while working. 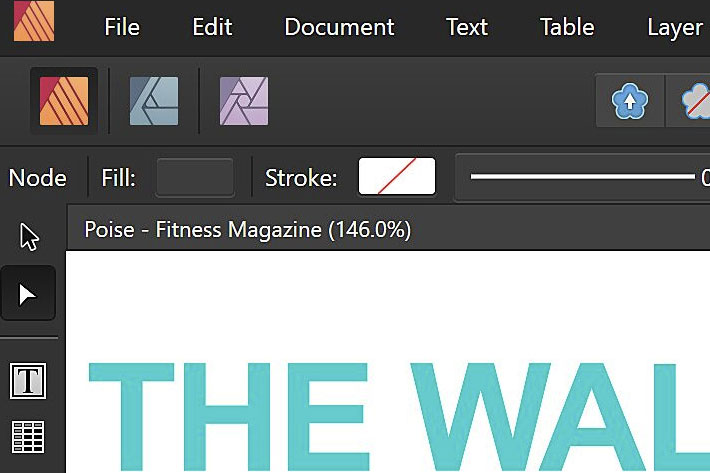 A copy of Publisher, which was available for those who had pre-ordered,  was running on my computer before the Affinity Live presentation, and I started playing with it. There was a new term appearing in a window – StudioLink –  suggesting I should link my other apps, in my case Affinity Photo, which I use. I also had to update the photo app, for both apps to be linked. Once it was done, I opened Publisher and clicked on the Photo app icon to open it. I was still looking at the pages opened in Publisher… It took me a few seconds and two or three clicks back and forth to understand that I was in fact moving – with the layout – from one app to the other and back.

I had to wait for the Affinity Live presentation to find more about the “magic”. StudioLink is a world-first! Serif’s brand new StudioLink technology means owners of its vector design app Affinity Designer and image editor Affinity Photo can use them right there in an Affinity Publisher layout, simply by clicking the relevant product icon.  Forget about having to move from your DTP app to your photo editor, it now happens with a simple click and one has to see it in action to fully understand how this changes workflows. I could not believe it! 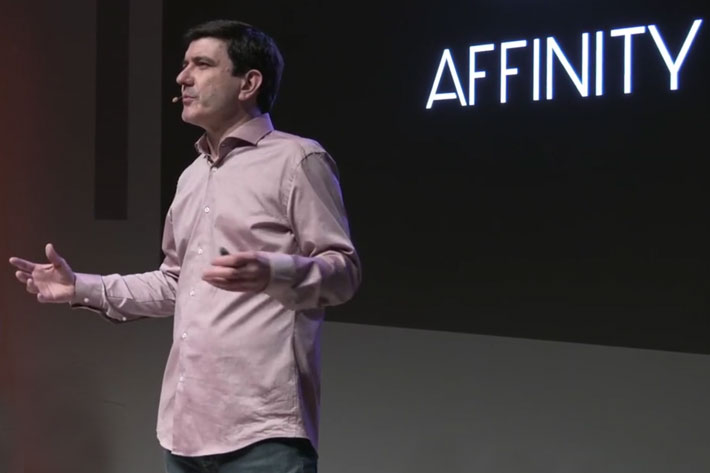 While Affinity Publisher has its own impressive selection of built-in vector and photo editing tools, StudioLink means for the first time, graphics and images in a layout can be edited using a full array of professional tools, without the need to switch to a different app. The result is, as Serif puts it, “a massive streamlining of the creative workflow.”

StudioLink is not some technology created recently to connect the different parts of the Affinity Suite, it is the core of the whole project.  “Affinity Publisher with StudioLink is the realisation of the initial vision we had for our apps nine years ago and I could not be more thrilled to finally reveal that vision today,” says Ashley Hewson. “This is the reason we called our apps Affinity.” 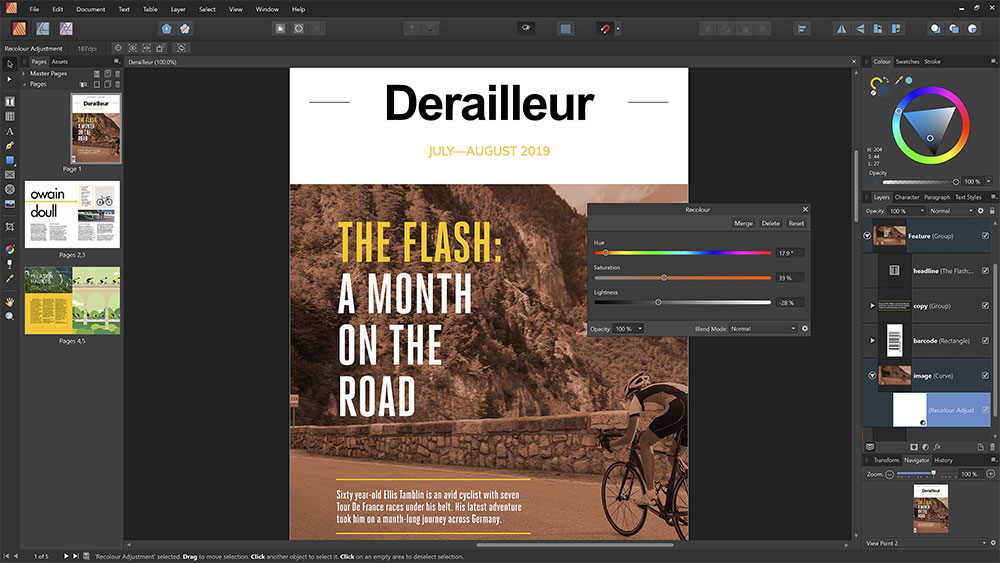 Is video coming to the Affinity Suite?

Now, Serif has been able to keep the origin of the name secret for many years, only revealing it now, at a time, also, when the company shows how fast its apps can work with the new computers, both PC and Mac. It makes sense, though, to ask if they consider it viable to develop a video editing app. I go back to the question because, after Designer, Photo and Publisher, the Affinity Suite does not seem to be able to expand in many more directions that towards an app called… Affinity Video. It is true that no one from Serif comments on this, but the fact is that the last words from Ashley Hewson, at the end of the Affinity Live presentation, were “ and we’ve just started”.

We may have to wait for a while to discover what’s coming next, but the news, right now, are exciting. The Affinity Suite is now a trio,  and one that also expands to iPad. While Publisher itself will come to iPad later, owners of Affinity Designer and Photo on iPad will be able to open, edit and export Publisher documents, on the move, from today. Serif updated the pioneering iPad versions of Affinity Designer and Photo to handle Affinity Publisher documents. 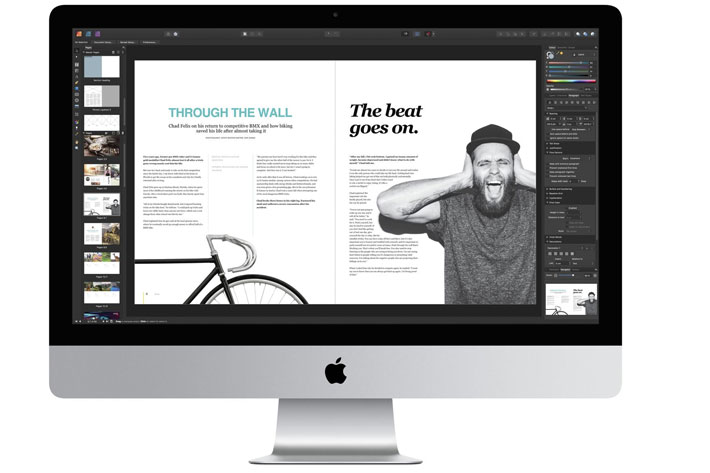 Affinity Suite is a game changer

During the presentation Ashley Hewson said: “For too long, millions of creative professionals have found their workflow hindered by incompatible file types, apps which don’t work properly together, and awkward workarounds which cost valuable time” adding that “Affinity Publisher with StudioLink takes all that pain away by allowing you to instantly switch to the advanced photo editing features of Affinity Photo and precise vector tools of Affinity Designer without ever leaving the app. It’s the most fluid workflow ever conceived in a creative suite of applications, and we think it’s a game changer.”

From creating simple text-based documents to posters and flyers, or complex brochures and books combining words, images and graphics, the meticulously-engineered features of Affinity Publisher means it runs like a dream, even on the most content-heavy documents, says Serif. With essentials like Master Pages, facing-page spreads, grids, tables, advanced typography, text flow and full professional print output, Affinity Publisher delivers all the requirements for a modern-day layout app, tailored to exploit the power of the very latest hardware. 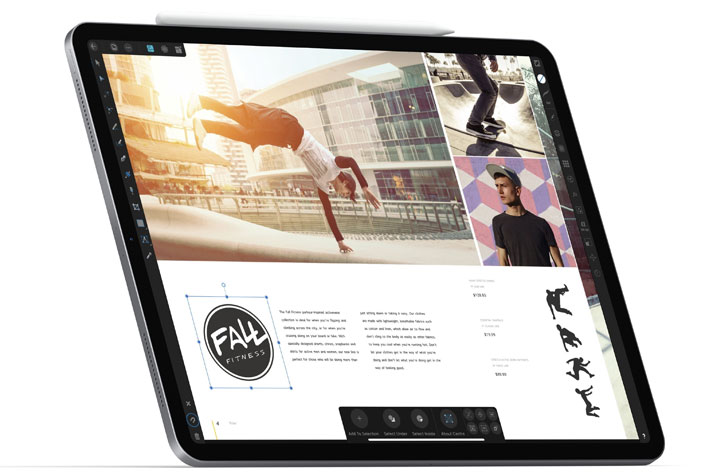 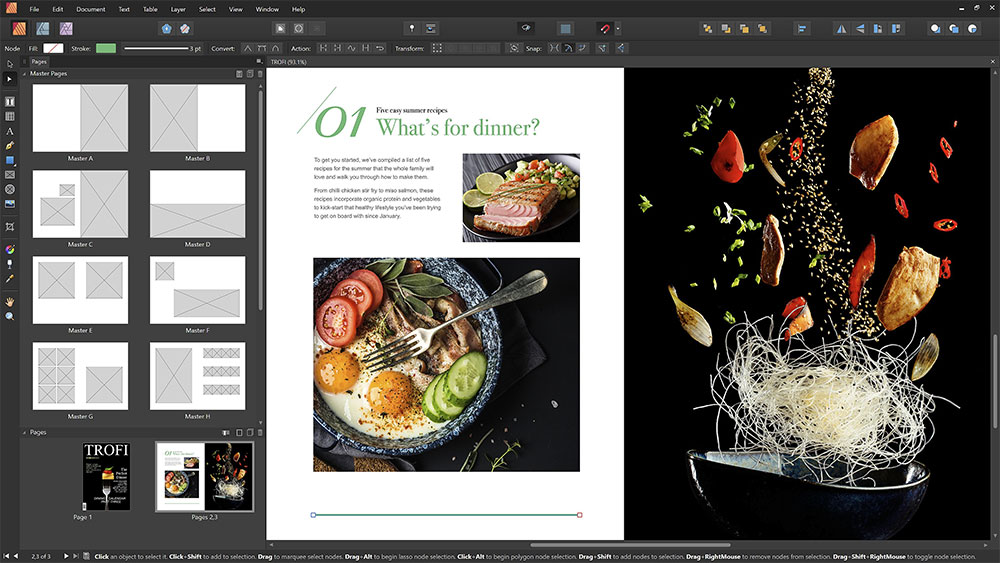 Affinity Publisher’s flexibility means it can import and export all major raster and vector files, including layered PSD, PDF, EPS formats. And it can output print-ready documents in the latest PDF/X formats, including hyperlink support for documents shared online.

With Affinity Publisher, photographers have the ideal tool to take full control of their promotional material, from books or eBooks to everything else. The DTP app represents also a welcome solution for whoever needs to create digital work, either for electronic distribution or for print. The Affinity Designer expands on the graphic options, while Affinity Photo is a complete photo editor. The trio forms the Affinity Suite, now in version 1.7, which costs, at its regular price, $49.99 per app, for a total close to $150.

Affinity Publisher is available with a 20% discount (priced $39.99) for a limited period, and as with all Affinity apps has no subscription.