Spirographs in After Effects had it's 15-minutes of fame years ago and were lost in the mists of time (around here anyway), except for a few tutorial/project posts. Revisiting the topic reveals a variety of approaches and directions.

In ESPL: Dances of the Planets, Ensign Software used their own day trader software to overlay planetary orbits, after inspiration from A Little Book of Coincidence by John Martineau. Here's 8 years of solar orbits of Earth and Venus, a five-petal flower with the Sun at the center of the cage: 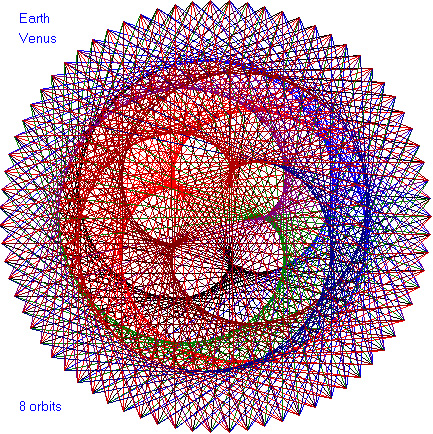 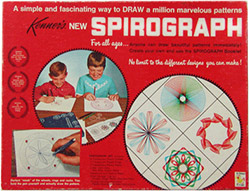 There are many examples of After Effects spirograph tutorials. Earlier ones — still interesting with free projects — includes those from Chris Zwar, Ayato, and Michele Yamazaki (now only in her book). Satya Meka showed similar results (he liked the Radio Waves filter) in Create an Ethereal Morphing Letter Canvas and Create an Elegant Concentric Rings Animation. Here's a preview:

Spirograph with Trapcode Particular uses an expression by Dan Ebberts from his resourceful MotionScript website.

Animating Spirograph by Ashish Rastogiis is a short text tutorial.

On Mograph, [email protected] posted 2 AE projects based on an old Mark Christiansen tutorial with Math.sin(time), Math.cos(time) and with nulls+parenting + WriteOn. He also posted a spirograph project made by attaching Trapcode Particular to a null and using it as an emitter to do some 3D. See also a spirograph in 3D by Brian Charles.

Motion Boutique released a free After Effects script ported from subBlue’s Guilloché Pattern Generator. Guilloché patterns are Spirograph-like patterns often used similar to create fine details on bank notes. Victoria Nece says “Nab’s script lets you make AE masks out of them. … You can’t animate the masks directly inside the script palette itself (although you can generate them at multiple keyframes along a single mask path), but that isn’t really a problem — I managed a lot of neat effects using a single static shape. These patterns work especially well as inputs for the Radio Waves effect — add a generous amount of blur and glow, and boom, instant animated BGs.” Here's some tests by Victoria:

Spirograph is a “condensed animated typeface inspired by the toy that was invented by Denys Fisher in 1965 (no longer available though Spirograph sets by Kahootz seem good). With a lots of customizing options, you will be able to easily create your own look. Besides the usual A to Z and 0 to 9, it also comes with extensive punctuation.” Also available at AEscripts.com.

Somewhat similar results can be found in sources noted in an earlier AEP roundups, Colored Light Strokes and Streaks and Spirals in After Effects.

If you use Apple Motion, check out Mark Spencer's video on how to create spirographs in Motion:

Spirographs are similar to Lissajous figures, but are rounded rather than squarish. An artist in exploration, Andy Gilmore took up the idea of spirographs loosely in a kaleidoscopic direction:

For some fun, there's the Pangraph, a spirograph adapted for frying pans: