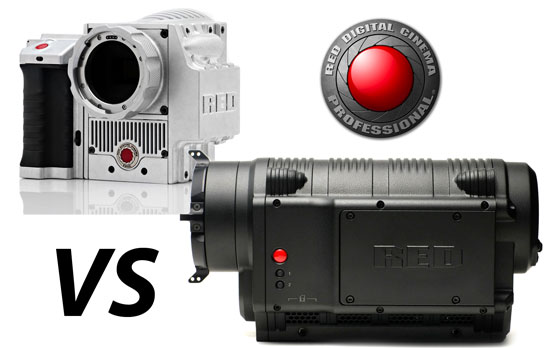 In case you missed it, Red announced some pretty detailed specs about the new Red Epic-X camera on Friday, October 30th. Details about it are here. This is a quicky, off the cuff list comparing the specifications of the existing Red One to the proposed, but still unshipped, Epic-X 35 camera (same thing as the Epic S35, just slightly goosed). Covers things like form factor, frame rates, resolution, codecs, accessories, etc. If I get something wrong or omit, please say so in the comments and I’ll amend ASAP. If wrong is by accident not avarice….(continues after the jump)

The Red One was somewhat modular in that that core camera (“the football”) didn’t include recording media, EVF, LCD, battery compartment, shoulder pad, rails, etc. – it was as stripped down as they could make it. It weighs about 10 pounds, including the sensor, electronics, controls, I/O ports, and CF module.

Epic and Epic-X take that modularity even further, busting apart the functionality even further – where the Red One had controls, ports, recording media (CF anyway), sensor/electronics all in one unit, the Epic breaks each of those out into individual components (to be clear, the sensor/electronics are one unit, the “Brain” of the Epic). The brain weighs about 6 pounds, NOT including the controls, I/O ports, and CF module, only the sensor and processing electronics.

It’ll be interesting to see how much it weighs kitted out “equivalently” to the Red One – with CF module, Redmote, Base I/O module. Making things modular makes the kit heavier – you have to fully enclose each item for rugged use, as well as make sturdy ports for the data to flow between – heavier and more complicated. Then again, there’s more consolidation and miniaturization and Moore’s Law going on in here, too – that should save some weight. But all things aren’t equal – the specs for Epic and Epic X blow hell out of the Red One. Sure, the resolution isn’t THAT much higher, but the frame rates and codec rates are WAY higher, and that’s where the electronics have to be substantially beefed up – and ATBE, that would make it weigh more. So let’s see how the final weight comes out for these two sets of kit – if Red makes it a tie, that’ll be impressive considering how much more Epic can do than the One. If it weighs more, eh – it is modular and does LOTS more two years later – can you really complain?

Red One has a stated “active area” of 4520×2540, but most of the time only up to 4096×2304 is usable (a beta mode in build 21 allows for full width for 2.35:1 recording as I understand it, but I haven’t used or researched it as yet). How much of that 5120 is usable? We don’t know exactly. Red One uses those extra pixels for the extremely useful “lookaround” area in the viewfinder to see, for instance, the boom that is ABOUT to come into shot rather than the boom that is ALREADY in shot – quite handy! If we have similar functionality in the Epic, what does that make the recordable area in 2:1 or 16:9? (Note aspect ratio differences in the two sensors). In the Red One, the “default” or “primary” aspect ratio is 16:9, with a recordable 4096 out of the 4520 pixels. This makes for 386 horizontal pixels used for the lookaround, or 193 pixels on each side (there are vertical lookaround pixels too). 386/4520=about 8.5% of the width. RAW (haha) SPECULATION FOLLOWS: Since 2:1 is the similarly “default” aspect ratio for Epic-X, in 2:1 recording following the same math I’d expect to get 217 pixels on each side, leaving a recordable 4682 pixels – which I wouldn’t call 5K recorded, so I may well have my math wrong here.

(both have 12 A/D converters, in case you’re wondering)

Or put another way:

I have a sneaking suspicion we’ll see slightly higher frame rates available for Epic and Epic-X in 16:9 mode, since that will be a smaller frame (side cropped) and therefore fewer pixels/sec to process – but I could well be wrong. It would make good sense to have consistent frame rate maximums per resolution – it is quite confusing with Red One what the maximum frame rate can be, since it is all conditional on what resolution you are shooting, what RC setting (Redcode data rate), what media you are recording to, and what aspect ratio you are shooting. Whew! Gets confusing. Then again, getting every last inch isn’t a bad thing either.

Red One – while highly configurable, ya gotsta work around that football. Epic will be more modular, such that if you don’t need outputs or control panel on camera while shooting, you can do away with them. Or remote the camera and put the controls elesewhere, etc.

Red, while highly configurable, can be time consuming to reconfigure due to the need to use allen wrenches etc.. It can also end up long and bulky to shoot with. Will the new design overcome these issues? To be determined, but closely followed.

Ergonomics for stills mode vs a DSLR? That’s another conversation in another article….

Red One: Twisty/pushy gnob fixed to the back of the camera, grey/black backlit LCD (think 80s wristwatch) on back of camera, better UI on LCD & EVF

Epic-X: Redcode up to 250 on Epic-X, 225 on Epic. I take this to mean the hardware will allow goosing up a Little Bit More – maybe the ASICS that test out a little faster? Dunno, but slightly faster with Epic-X. Red says they are “counting” (or perhaps rating?) the Redcode numbers differently on Epic/Scarlet than they have on Red One, so a direct comparison is not accurate – I wouldn’t expect Redcode 250 to be 250 MB/sec for 24p the way Redcode 28 runs (as high as) 28 MB/sec on Red One.

Red One: Cooke /i compatible PL mount; with “dumb” Nikon and Canon mount adaptors available (no iris/focus info passed in either direction – so no autofocus or auto-iris, and no recording of lens settings). Fixed sensor, adjustable (and sometimes cantankerous/tricky) PL mount.

Epic & Epic-X: in addition to Cooke’s lens data system, Arri’s LDS (yep, Lens Data System) will be supported as well, AFAIK right in the body. Sweet. Also, this time around SMART lens mount adaptors for new Red smart lenses, as well as Canon and Nikon adaptors. This means autofocus, auto-iris, and presumably lens data info passed to camera metadata. Also, note that the pictures show no PL mount adjustment like the Red One has – this time, the sensor is adjustable, 5 ways they say. I take that to mean roll/pitch/yaw, in/out, up/down, but I could well be wrong – I’m just guessing here.

Red One: didn’t really have this mode – you could yoink a still out of any sequence with tools like Red Alert and save it as a TIFF or DPX, but the camera wasn’t set up to shoot stills (but did have some still camera like options like time lapse, etc.).

Epic & Epic-X: specifically designed to shoot stills as well, going so far as a stills specific mode separate from video mode. A brain with a handle (a $950 add-on) and a lens an LCD and you can shoot stills. Add the $3200 Bomb-EVF and you can hold it up to your face to shoot stills (although I’m sure there will be adaptors for the $900 2.8 LCD as well, same as there are for 5D Mk II rear LCD) and you have a stills AND motion camera. BUT…it’ll be heavy compared to the VDSLR (video Digital Single Lens Reflex) cameras on the market. Those are stills cameras where video is the “me too” functionality, at core Scarlet/Epic are video cameras where stills are the “me too” add-on – more in another article on that.

Whew! OK, that’s the major stuff. Again, if I missed anything, please let me know.

PS – in accordance with the new FCC disclaimer regs, which I’ll fully comply with shortly as soon as I can write a separate disclaimer article, I am a Red One owner, I worked a few trade shows for them a couple of years ago (I received plane tix/hotel/meals, same as the “for real” Red employees, which I never was, and received ZERO compensation beyond that), and know most of the key players personally at Red. They’re nice folks.Oh, and way back in Dec. 2005, I got flown up to Oakley to participate in a meeting where the specs for the proposed Red camera were discussed, for which I received a nifty pair of MP3 playing sunglasses as a thanks for taking the time to come, same as everyone else they flew in (VFX folks, DoPs, post production software folks, etc.)