Sabine Kämper had two major projects in mind when she set off to her dream country Namibia during the summer. With a stereo pair of Sennheiser MKH 8040 cardioid microphones and a matching windshield prototype from Rycote in her backpack, the journalist and author from Hamburg travelled through Namibia to record ethnic choirs and the sounds of nature. The first result of her 9,000 kilometre trip from the Kalahari to Kaokoveld is now complete: “Chorus and Cuisine”, an unusual mixture of travel guide, recipe book and music CD, has just been published. 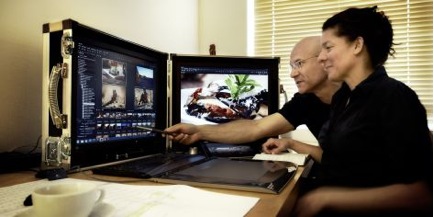 For “Chorus and Cuisine – Namibia”, Sabine Kämper embarked on a culinary journey through the African country and its lodges, recording the staff choirs as she went. “That perhaps sounds a little unusual at first,” the author said, “but not when I tell the story that led up to it. In 2008, I was at ‘The Fort' lodge in the Onguma Game Reserve in the Etosha National Park. After an excellent dinner, many of the female guests begged the chef to reveal the recipe for his soup. He did so, and everyone was happy. I can understand them, as I'm also a passionate collector of recipes when I'm travelling. I also like to buy CDs of the typical music of the country as a holiday souvenir. In Southern Africa, it is customary on many of the lodges and guest farms for the kitchen staff or even the entire team to perform a few traditional songs after the meal – and that was the case in Onguma… That was the birth of ‘Chorus and Cuisine'.”

“Safari feeling between the covers of a book”
In 2012, Sabine Kämper and her partner Detlef Overmann finally set off for Namibia to visit a total of 18 selected lodges and to record the staff choirs, collect recipes and photograph the dishes. “It was clear to me, of course, that I would have to do a lot of improvising when it came to the audio recordings – we expected to be recording in all different kinds of rooms, from libraries to laundries. For that reason, we needed microphones that guaranteed good recordings whatever the situation, and so I turned to Sennheiser's experts for help,” said Kämper. They recommended that she use MKH 8040s – not least because of the high temperatures of the location, and also because Kämper was planning to make outdoor recordings for another project.

“In the end, we never actually needed to record in a laundry,” Kämper recalled. “Most of the time, we somehow managed to squeeze the choir into our lodge room or we were able to record in the kitchen. Once, the lodge manager even let us use his living room. We used an ORTF arrangement for the recordings and fed the sound from the pair of microphones directly into a computer via a small Mbox2 interface. This lightweight and compact audio system provided us with excellent recordings. After the rough cut, I asked the audio engineer what he had done to the recordings to make them sound so perfectly ‘rounded', and he said: “Not much. I only put the songs in the order you wanted…”

Soundscapes in the Kalahari
Sabine Kämper and Detlef Overmann also used their journey through Namibia to make recordings for a second project. For “Soundscapes”, they recorded typical sounds of the country, which Namibian artists could then use as a basis and background for music compositions. “For the atmospheric sounds, for example, I thought of the barking gecko in the desert, the dawn chorus of birds and the sound of antelopes at a waterhole. I wanted to record village sounds or simply the rushing of the Atlantic waves,” Sabine Kämper said. A major challenge in all of these recordings was wind noise, as it can often get quite stormy in the desert in the evening. The author also worried about the microphones being constantly exposed to fine sand dust.

“The Rycote windshield prototype was just what I needed, and the equipment turned out to be extremely sturdy. I was able to record really wonderful natural background sounds, and the production with the artists is scheduled to begin in 2013,” said Kämper. “The microphones were simply fantastic. On the very first recordings in the bush in the Kalahari, I always noticed a kind of buzzing and whizzing sound that I couldn't explain. The interface was OK, the headphones were fine, the microphones were working perfectly as always, and there was nothing wrong with my ears. In the end, I found out that I had recorded the wing beats of some weaver birds on a tree some distance away. Well, I'd already been fascinated by the MKHs, but now I was absolutely in love with them!”

MKH microphones from Sennheiser
The MKH microphone series from audio specialist Sennheiser works on the RF principle that the company has been using for more than 50 years and has refined to absolute perfection. The benefits of this microphone principle are high climatic resistance, low inherent self-noise and the wide frequency range of the microphones, making them ideally qualified for even the most unusual applications.

Sabine Kämper is a freelance journalist and author. She is a great fan of radio and audiobooks. Her publishing company kuduhear takes up the African tradition of narrative and oral culture in a modern way. It presents documentation and stories from and about Africa. Each audiobook is a small journey on the African continent. They feature a mix of original sounds, interviews and music; the recipe books come with a CD with accompanying music. These will soon be complemented by readings of safari stories and novels. “Chorus and Cuisine – Namibia” (ISBN 978-3-942143-03-5) has German and English texts and is now available at amazon.de.www.kuduhear.com.

Sennheiser is a world-leading manufacturer of microphones, headphones and wireless transmission systems. Established in 1945 in Wedemark, Germany, Sennheiser is now a global brand represented in 60 countries around the world with U.S. headquarters in Old Lyme, Conn. Sennheiser's pioneering excellence in technology has rewarded the company with numerous awards and accolades including an Emmy, a Grammy, and the Scientific and Engineering Award of the Academy of Motion Picture Arts and Sciences.

You can find all the latest information on Sennheiser by visiting their website.