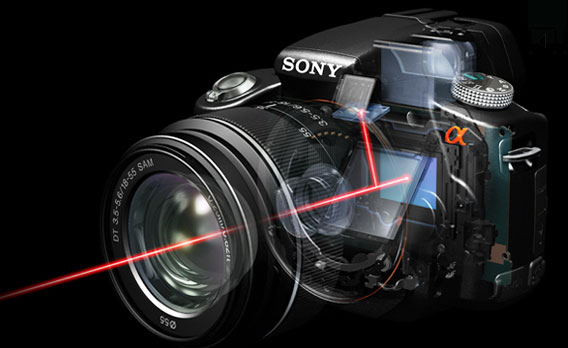 If there is a war between manufacturers for the greatest share of the HDSLR market, then Sony is launching a shock and awe campaign with no end in sight. Their latest assault, the second in a month, is the announcement of two new DSLRs, the ?55 and ?33. These two cameras seem to aggressively target the Canon T2i and 7D head on.

On the outside, they look like any other DSLR. Upon closer examination, the new Sony ?55 and ?33 clearly have enough new features to distinguish themselves from other HDSLRs.

A huge feature for HDSLR shooters is an in-body camera stabilization system providing up to four exposure steps of anti-shake correction when shooting handheld.

Autofocus Even While Shooting Video

Simultaneous “Live” View From the LCD and Viewfinder

Both the ?55 and ?33 use Sony’s new “Translucent Mirror Technology”. Essentially, it’s a fixed, translucent mirror that ‘splits’ the optical pathway between the main image sensor and a separate phase-detection autofocus sensor. Unlike other DSLRs where the raised mirror prevents light from reaching the optical viewfinder and vice versa, you can use both the LCD or the electronic viewfinder at the same time. I have to wonder how this will affect battery life. No word yet, but I hope Sony has upgraded their batteries to handle the additional monitor.

The three inch LCD tilts and swivels to maximum 270 degrees. The electronic viewfinder with 1.15 million dot resolution shows 100% frame coverage. Adjustments to exposure, depth of field and color can be previewed instantly in the viewfinder or on the LCD.

Both cameras shoot panoramas in 3D, which is awesome if you have a 3D capable monitor.