Heat, price and performance and the requirement for a lot more circuitry are some of the reasons why the new EOS 5Ds and EOS 5Ds R do not have 4K video. The high resolution, 50MP, is one more reason. But they offer more than 8K, in fact.

With enough pixels to keep the crown as the highest resolution DSLR cameras for a while, and entering without trouble into medium format space, something that Canon has dreamed about for quite some time, the EOS 5Ds and EOS 5Ds R are amazing cameras, but should not be looked as the camera of choice for video. They celebrate a decade of the EOS 5D family.

Canon recently presented a video tracing the 10 years of the EOS 5D, from the first model, offering a full frame sensor within a body similar to APS-C size, through the first EOS 5D Mark II with video (2008), which marked a definitive change in terms of the options available to everybody, and started a revolution. The same revolution that now takes us to the high-resolution DSLRs models which, contrary to what many expected, are less video cameras than the previous EOS 5D Mark III.

In fact, the video specifications of the EOS 5Ds and EOS 5Ds R are not very different from the EOS 5D Mark III and there are even things missing, like a much requested headphone socket for audio monitoring. In an interview published by CPN, Tsunemasa Ohara – Senior General Manager of Camera Research and Development at Canon Inc explains the reason behind the decision:

“We ran out of room! By equipping the EOS 5Ds and EOS 5Ds R with USB 3.0 – which was important to transfer such high levels of image data – unfortunately we didn’t have any space left for headphones in the existing EOS 5D Mark III body shell used for these cameras.”

There is more, though. Chuck Westfall, from Canon, also mentions that “the uncompressed HDMI output found on the 5D Mark III has not been included on either of the cameras as the EOS 5Ds and EOS 5Ds R are more prone to moiré and skewing, making them less suitable for high-end video production. But to find a complete explanation of the new models, I would take the time to read the review published by Bryan Carnathan, which offers a good “hands-on” experience of the EOS 5Ds. It should be noted that the review, although pointing to video aspects, is geared towards the main use of these cameras: Photography. 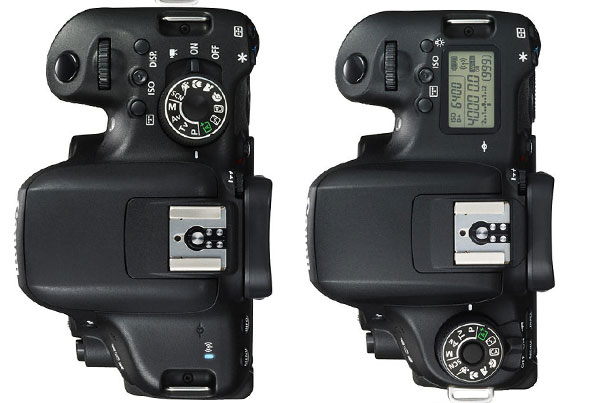 The nice pair formed by the EOS 5Ds and EOS 5Ds R is an example of Canon segmenting their offer. It is not the only one, as Canon showed the same principle with the launch of the Canon EOS Rebel T6s / 760D and the Canon EOS Rebel T6i / 750D. Although in a different manner, Canon offers two models with specifications almost similar but inscribes, on the T6s / 760D, some extra features and a more sophisticated control interface. We can expect more solutions in the same vein in the future, it seems. Not always represented by a two-model launch, but by cameras that are conceived to a specific segment of the public, instead of trying to be a jack-of-all-trades. 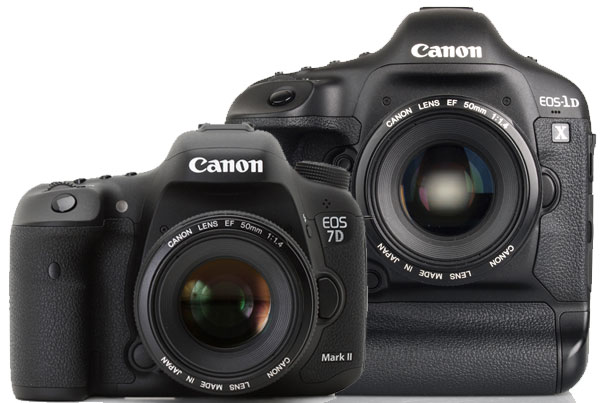 The EOS 7D Mark II can also be included in that segmentation plan: with it Canon created a fast APS-C camera that represents a viable solution for photographers aiming for the speed of the EOS 1D X in a smaller body… and a more accessible price. According to recent rumors, a EOS 6D Mark II is expected for some time in the future, still presented as a entry level video camera for the full format segment. Pixel count is expected to rise, probably to 24MP, the same count as the recent EOS T6s/T6i APS-C sensor, as the general public continues to ask for more pixels. But professional models, like the much rumoured EOS 1D X Mark II will probably stay on the 20MP mark (the actual EOS 1D X has 18MP), continuing a trend for “professional” cameras: less pixels and more performance at high ISO. One example is the sensor for the rumoured Nikon D5 that will be presented soon: it is said to have 20MP.

During the interview at CPN, Tsunemasa Ohara mentions that for production of the EOS 5Ds and EOS 5Ds R “the first criteria – as with all EOS cameras – was high image quality. To achieve this was our first priority. From a development point of view it was possible to increase the megapixel size even more but, from an image quality perspective, to do that alone was not good. Therefore, achieving the optimum balance between high megapixels and high image quality was our most important objective at all times.” 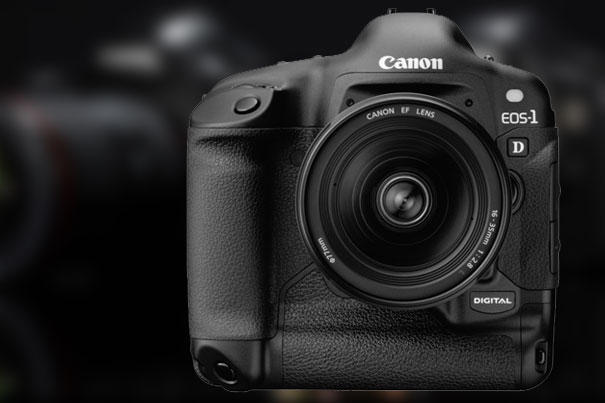 It probably makes complete sense to keep pixel count at a less exciting but reasonable value, as professional photographers around the world continue to use cameras with those sensors and do not seem to complain. The EOS 5D Mark III has a 22.3MP sensor, the EOS 5D Mark IV may, according to rumours, have a 18MP sensor, meaning Canon will remove 4MP from the actual version to offer better performance at high ISO. Nothing they didn’t do before, as Canon used the same idea when moving from their compact Powershot G10 to the G11 model: they reduced the size of pixels on the sensor from 14.7 to 10MP, preferring better quality. Does anyone still remember that the first professional EOS-1D, from 2001, had a fantastic 4 Megapixel 1.3x crop factor sensor and a dynamic range from 200-1600 ISO?

When the PowerShot G11 was launched, the reviewers at Imaging Resource wrote, in 2009, that “this marks the first time we’ve seen resolution being reduced as a camera lineup progresses, and it’s an important step in the direction of sanity. With the megapixel war now thankfully in its death throes, we’d like to see a few more manufacturers dialling back their sensor resolutions in the interests of improved dynamic range, image noise and low-light performance. Canon says the G11 offers a two-stop improvement in noise performance as compared to the G10. “ Let me add that unfortunately time has shown us that for many people more pixels is the way to go…

The new EOS 5Ds and the EOS 5Ds R are, in this context, a different proposition, and should be seen as a way for Canon to say “we did it because we could” when it comes to resolution, and also as a path to approach the medium format market. Tsunemasa Ohara mentions it in the CPN interview, saying that “In terms of megapixels, the EOS 5DS and EOS 5DS R are almost the same as a medium format camera and offer the same levels of image quality too. The key advantage from an EOS perspective is that handling and mobility is much better than a medium format camera. This is a major advantage with our product because it is smaller and lighter and can be used in a wider variety of situations.” 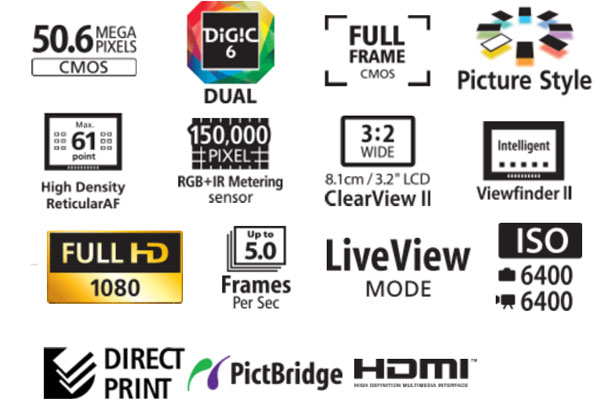 The new EOS 5Ds and EOS 5Ds R offer an impressive list of specifications, but for some they miss one thing: 4K. Still, the cameras offer a resolution above what 8K can offer

Still, for many people, the new cameras have a problem. The now eternal “not 4K? Then I don’t want it” comment was and is still present when some people look at these – and other – cameras. As if everybody needed/wanted 4K, or, for that matter wanted video as their main reason to buy a camera like this. Or many others. Photography is still what moves a lot of people to buy DSLRs – and other types of cameras – so it makes sense to look at models for what they really are. These cameras are, according to Bryan Carnathan, “for commercial, studio, portrait, still life, landscape, nature and architectural photographers that are especially interested in this camera’s resolution combined with its pro-grade package of features including rugged build quality.”

Will the next Canon DSLRs offer 4K? In a recent interview, Canon UK’s Product Intelligence Professional, David Parry, mentioned that the company is looking at the professional end for 4K, but added that “I shot a load of 4K on the XC10 and brought it back home and realized I actually had nothing capable of processing the footage and outputting it…” and ended stating that “at the moment it’s widely accepted that everyone’s got the capability to process Full HD”.

This still does not answer those waiting for a precise notion of the future, but it all depends on the market, really, and Canon’s plans in terms of segmentation. If they reserve 4K for their Cinema EOS line, than DSLRs may not follow that path. But if Nikon D5, as rumoured, offers 4K, what will Canon do? That’s something we all will have to wait and see, and there is no exact information on what the new models will offer. Only rumours.

One last ironic note: Canon new cameras already offer, in fact, more than 8K (with a sensor resolution of 8688 x 5792) and that’s available to be used in, for example, time-lapse sequences, something the cameras are good at. Now, if time-lapse is to a certain extent an accepted way to do video, this is a way to achieve 4K and beyond. Not surprising, as I’ve shown here previously, in one article entitled 8K Video With a Nikon D800 DSLR.