Quick links to early info on this large-format camcorder. 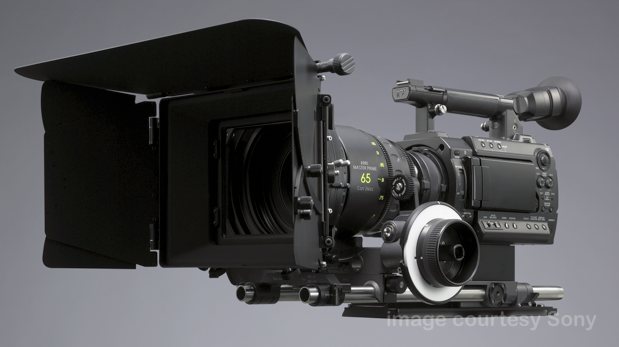 Direct competition for the Panasonic AG-AF100? Think again: the US$16,000 body-only price is more than three times what the AF100 costs; with lenses it’s nearly five times as much (US$23,000. As usual, European prices are rather a bit higher… and that’s before VAT. Sigh). But then again, the camera has dual-link HD-SDI outputs for 4:4:4 10-bit offboard recording; S-Log gamma curves; loadable LUTs; a “3D link” terminal for stereoscopic applications; and a reported 12- to 13-stop dynamic range—think of it as a baby F35 or a RED ONE / Alexa competitor more than a challenge to the AF100.

The new PMW-F3 camcorder is designed for a range of digital production applications — from commercial, documentary, television and feature film production to markets such as education, corporate and government and more.

“Sony has a long and successful track record of developing digital production technologies that give producers at any level access to the highest-quality imaging tools and the right workflow for their needs,” said Alec Shapiro, senior vice president, sales and marketing for Sony Electronics’ Professional Solutions of America group. “With the new F3, we’re putting the full power of our expertise to work for professional shooters, resulting in high-performance digital capabilities at an ‘indie’ price.”

The new compact camcorder has a basic list price of $16,000. That, combined with the availability of a low-cost PL lens kit, which includes 35/50/85mm T2.0 fixed focal length lenses, broadens the camcorder’s range of potential applications and gives users more flexibility in lens selection. For example, it is ideal for use as a 2nd unit 35mm camera to complement to Sony’s F35 and SRW-9000PL, which are also PL Mount, S-35mm cameras.

Additionally, “S-Log” and “Hyper Gamma” can be selected. This can significantly increase the camera’s performance of dynamic range. S-Log is Sony’s unique approach to the raw “Digital Negative,” allowing access to the full dynamic range of the Super35mm imager for maximum flexibility in image manipulation during post production. This capability combined with the widely used SxS format lets users take advantage of already well-established XDCAM EX and HDCAM SR workflows.

The PMW-F3’s PL mount adapter can accommodate both PL and upcoming Sony’s zoom lenses, and offers compatibility with a variety of cine lenses such as Cooke, Fujinon and Zeiss.

As with all its digital motion picture production technologies, Sony is also planning to introduce a compatible SR Memory Portable Recorder for the PMW-F3 camcorder. SR Memory, Sony’s new high-speed, high-capacity card format will give users the ability to record directly to the industry standard HDCAM SR codec using the SR Memory Portable Recorder connected to the F3 camera’s single-link and dual-link output.

The camera will also support Look-up Table (LUT), unique for dailies and on-set color management. Up to four LUT’s can be stored in the camera and stamped onto the footage on the SxS card, simultaneously using the camera’s dual link output with S-Log for the unprocessed image. This creates the perfect off-line, on-line workflow combining the SxS and SR codec, with the SR Memory Portable Recorder connected to the F3 and recording to the SR codec.

The PMW-F3 is just the latest stop on Sony’s digital 35 mm roadmap, continuing the leadership position in digital motion picture production that was solidified with “film style” cameras like the F23 and F35, and most recently with the first camcorder to integrate the HDCAM SR format, the SRW-9000PL.

“Sony cameras have shot everything from documentaries to big-budget blockbusters, winning industry awards and totaling more than $12 billion at the box office,” said Shapiro. “The F3 continues our history of innovation as the first professional camcorder to integrate S-35mm technology in an affordable, portable form factor.”

Jon Fauer’s excellent early writeups on Film & Digital Times [if you aren’t checking http://www.fdtimes.com/news/ every day or so, you’re missing out.]:

Things are getting… interesting… [grin]