Sony expands the RX100 series with a new compact model featuring a few innovations that make it stand out from the crowd. Is the RX100 VI Sony’s wonder camera for traveling? 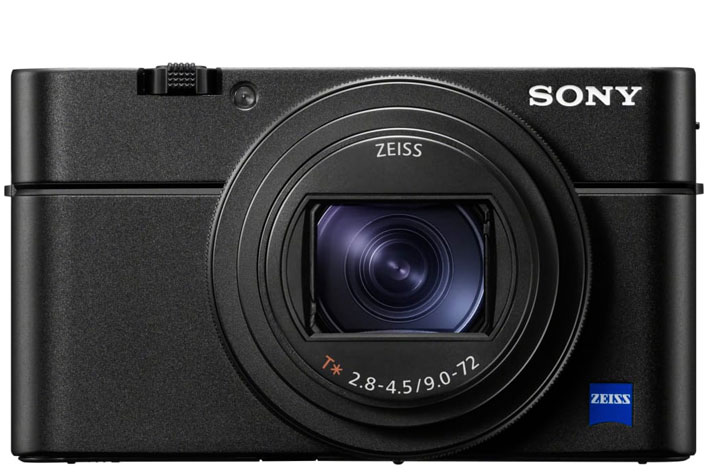 World’s fastest AF speed in an ultra-compact body is only the first of many firsts for the Sony Cyber-shot RX100 VI. There are other “firsts” that take this camera to a new level within the family.

Because this is a camera of “firsts”, it makes sense to point them all before we continue. So, here it goes, with all the details available about each of the new features that contribute to make this the “exciting model” that Sony suggests.

The new RX100 VI camera is the first of all the RX100 models to include a high magnification zoom lens, as it packs in an impressive ZEISS Vario-Sonnar T* 24-200mm F2.8 – F4.5 lens yet doesn’t sacrifice the pocket-size portability, fast responsiveness and high image quality that has become the hallmark of Sony’s RX100 line-up. Sony says that “its extensive zoom, impressive image quality and versatility for both still images and video make it an ideal choice for capturing daily life, cityscapes, portraiture, sports, wildlife and everything in between.”

Sony’s Fast Hybrid AF system is present, and we will look at it in a minute, but here, let’s reveal that as a first for the RX100 series of cameras, the RX100 VI includes Sony’s advanced High-density Tracking AF technology, which concentrates AF points around a subject to improve tracking and focus accuracy.

Also a first for Sony’s RX series, the RX100 VI has a touch shutter that can be activated by tapping the back LCD screen, a zoom lever with customisable zoom speeds and an LCD that can be rotated 180 degrees upward or 90 degrees downward for a variety of shooting angles for the creator. There is also a Monitor Auto OFF function that boosts max number of still images by up to 30%, and the camera is also Wi-Fi, NFC and Bluetooth compatible. 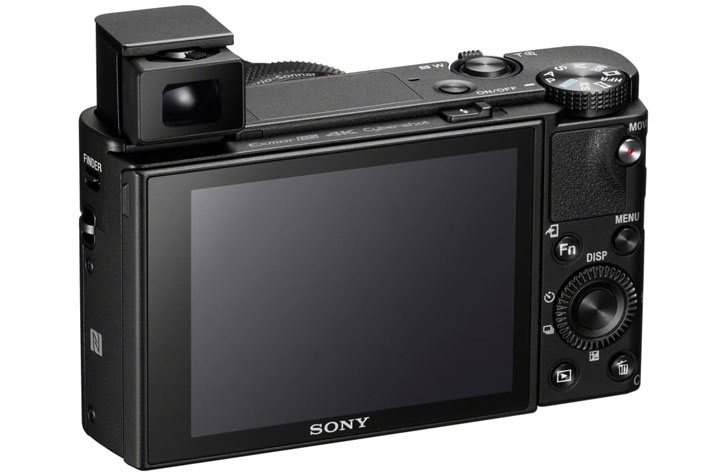 The series of “firsts” extends to video capture as well, and for the first time in a Cyber-shot camera, the RX100 VI features 4K HDR compatibility thanks to its new HLG (Hybrid Log-Gamma) picture profile that offers an instant HDR workflow solution. Additional professional calibre video features include S-Log3/S-Gamut3, 120p Full HD mode, Picture Profile, proxy recording and more. The RX100 VI is able to record superslow motion video at either 250 fps, 500 fps or 1000 fps.

Now that the “firsts” are revealed, let’s look at other features that make this an interesting model to carry with you all the time. The camera is equipped with a 20.1 MP 1.0-type stacked Exmor RS CMOS image sensor with DRAM chip and an upgraded BIONZ X image processing system with a front-end LSI that maximises, says Sony, processing speed and optimises image quality in all shooting environments. In terms of AF, the camera features a Fast Hybrid AF system with 315-point phase-detection AF points covering approximately 65% of the sensor that can acquire focus in as little as 0.03 seconds, which is, according to Sony, the world’s fastest AF acquisition time for 1.0-type sensor cameras. It can also shoot at up to 24 fps at full resolution with continuous AF/AE tracking.

This high speed focusing system complements the versatile 24-200mm range of the lens, ensuring all subjects can be captured with precise detail and clarity. The ZEISS Vario-Sonnar T* 24-200mmi F2.8 – F4.5 lens packs the power of both 24-70mm and 70-200mmi focal lengths, usually the pair in the photo bag of many professionals, into a singular compact design. This is achieved thanks to its unique design featuring two ED (extra-low dispersion) aspherical glass elements and eight aspherical lens elements including four AA (advanced aspherical) lenses. All pieces work together seamlessly to deliver, says Sony, “outstanding sharpness from corner-to-corner at all focal lengths, maintaining the acclaimed image quality of the RX100 series”. It’s an evident message for owners of larger DSLR and – why not? – mirrorless cameras. Why not just take this compact?

The lens has built-in Optical SteadyShot image stabilisation that is equivalent to a 4.0-stop faster shutter speed, helping to prevent blur at slower shutter speed while shooting in low light conditions or at telephoto zoom range. To make this all work the right way, the RX100 VI includes, as said, Sony’s advanced High-density Tracking AF technology, which concentrates AF points around a subject to improve tracking and focus accuracy. The popular Eye AF technology is also available with approximately 2x the tracking performance of the current RX100 series model. Furthermore, the camera has LCD touch focusing and touchpad focus point control for users that would like to drag their fingers to ideal focus points of their choice. 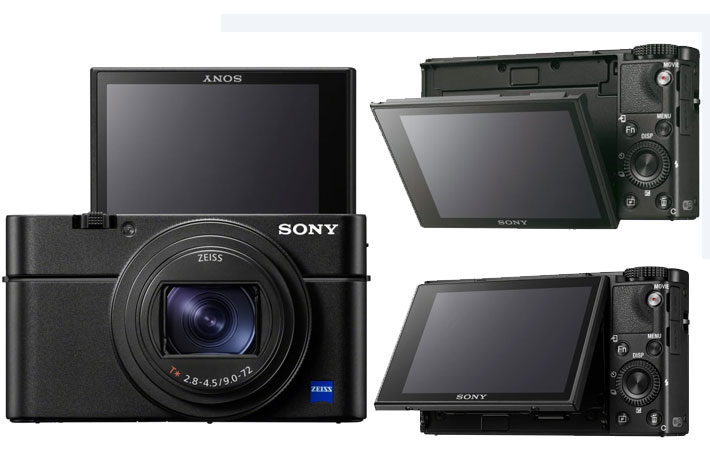 An ideal complement to the AF system, the RX100 VI offers continuous high-speed shooting at up to 24 fps with full AF/AE tracking, with an impressive buffer limit of up to 233 images. The display lag of the EVF has been substantially reduced compared to prior models, adds Sony, allowing shooters to capture the decisive moment with ultimate confidence. Also, continuously shot images can now be played back in group on display instead of individually making it more convenient to review.

The new RX100 VI is equipped with a high-contrast 2.35 million dot XGA OLED Tru-Finder with ZEISS T* Coating, ensuring true-to-life image preview and playback functionality. The EVF itself retracts in and out of the camera body based on user preference, and can be activated instantly by a single One-push Access button.

The RX100 VI also has a high speed Anti-Distortion Shutter (maximum shutter speed of up to 1/32000 second) that reduces the “rolling shutter” effect commonly experienced with fast moving subjects, and can shoot completely silently in all modes, including continuous high speed shooting, when electronic shutter is engaged. A mechanical shutter mode is also available as well if required by the user. 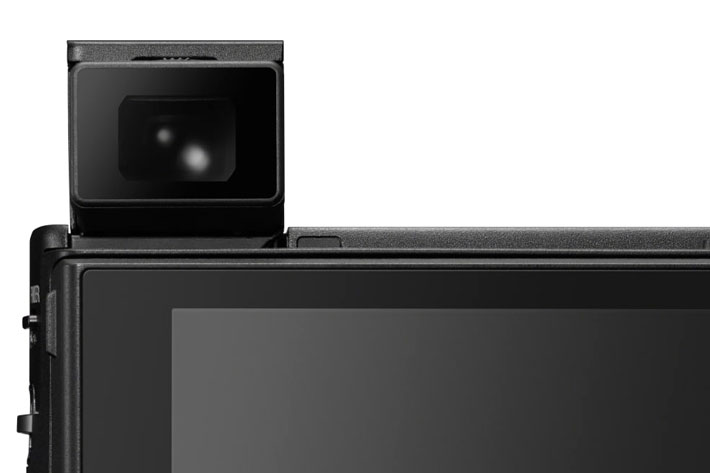 In terms of video, Sony believes the pocket-friendly RX100 VI is packed with a variety of video capabilities that will satisfy even the most demanding video enthusiasts. According to the company, “with Fast Hybrid AF, the focal-plane phase-detection AF points ensures accurate focusing and tracking performance, even for the severe focusing requirements of 4K movie shooting. AF drive speed and AF tracking sensitivity can also be adjusted via the menu system, giving shooters plenty of flexibility based on their focusing preferences.”

In 4K mode, the new RX100 VI utilises full pixel readout without pixel binning to ensure that all the finer details of 4K video are captured with minimal moire and ‘jaggies’. The RX100 VI also features, as mentioned earlier,  4K HDR for instant HDR workflow, a “first” for this type of camera. 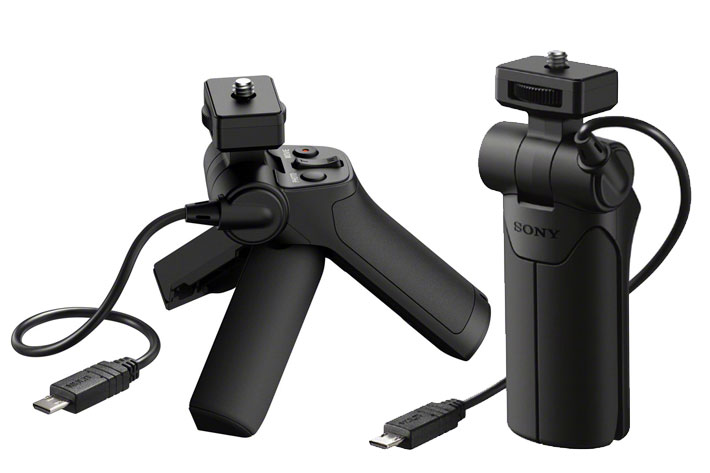 Simultaneously with the camera, Sony announced a versatile and compact new Shooting Grip best suited for its RX0 and RX100 series of cameras.

Ideal for vlogging, travel photography and video shooting, self-portraits and much more, the new VCT-SGR1 is a vertically-oriented shooting grip that attaches to Sony’s RX0 and RX100 series of cameras via Multi/Micro USB Terminal. Extremely compact and lightweight, it can adjust angles up 70 degrees or down to 100 degrees to capture different perspectives including high-angle shots, low-angle shots and self-portraits.

The grip features several buttons at the top, including shutter release, REC stop/start and zoom functionality, allowing for easy fingertip control for both right and left handed usage. Additionally, the bottom of the grip can be spread-out and used as a tripod, making it an ideal accessory for group photos or low-light shooting conditions to avoid camera shake when shooting at slower shutter speeds.

The new VCT-SGR1 Shooting Grip will ship this September in North America, priced at approximately $100 US or $130 CA.

The new Xperia PRO-I is the world’s first smartphone to include a 1.0-type image sensor with PDAF, the same...