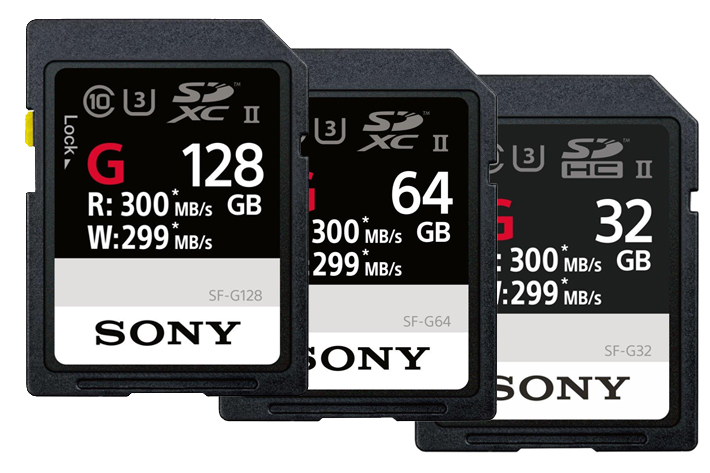 With a write speed of up to 299 MB/s, enabled by Sony’s unique firmware, the SF-G Series will be the world’s fastest SD cards, says the company.  The quick write speed supports maximum performance of digital imaging devices, contributing to longer continuous shooting of high-resolution images with UHS-II supporting cameras.   It also contributes to a shorter buffer clearing time so users never miss a critical moment.

Using Sony’s algorithm, the cards prevent the decrease of data-writing speeds and contribute to the camera’s ability of successive high speed shooting. The cards also feature a read speed of up to 300MB/s.  Paired with a memory card reader, the cards can transfer large volumes and file sizes to a computer very quickly, contributing to a more efficient workflow for professionals.

“Available in 32GB, 64GB and 128GB capacities, the SF-G Series offers options that ensure high-performance, high speed  and reliable shooting,” said Viviano Cantu, Vice President, Product Marketing, Sony Americas Media and Energy Group.   “As the continuous shooting of higher-resolution images and adoption of 4K video with DSLR and mirrorless cameras increases, the inherent need for larger, faster and more dependable cards becomes apparent.  A longtime leader at the forefront of professional media, Sony has met these growing demands with the debut of the SF-G Series, which offers industry leading performance.”

Sony’s SD cards are extremely reliable and durable, with water proof and anti-static capabilities to keep your precious content safe. Additionally, Sony’s free downloadable File Rescue software allows for the recovery of photos and videos, including RAW images and 4K XAVC-S video files, that may have been accidentally damaged or deleted.

The SF-G Series is planned to be available in Spring 2017. Also in Spring 2017, a high speed SD memory card reader, MRW-S1 supporting UHS-II, will be available for use with the SF-G series, enabling the fast and convenient transfer of data to a PC with a USB 3.1 Gen1 Interface.

These new fast cards hint to a near future, and new cameras that will really benefit from them. Because right now, and that is valid for Sony cameras as well, these fast cards give no extra benefit to users. Most cameras only support UHS-I, and many can’t even benefit from the fastest cards in that category. Maybe Sony is preparing something new that will use UHS-II.