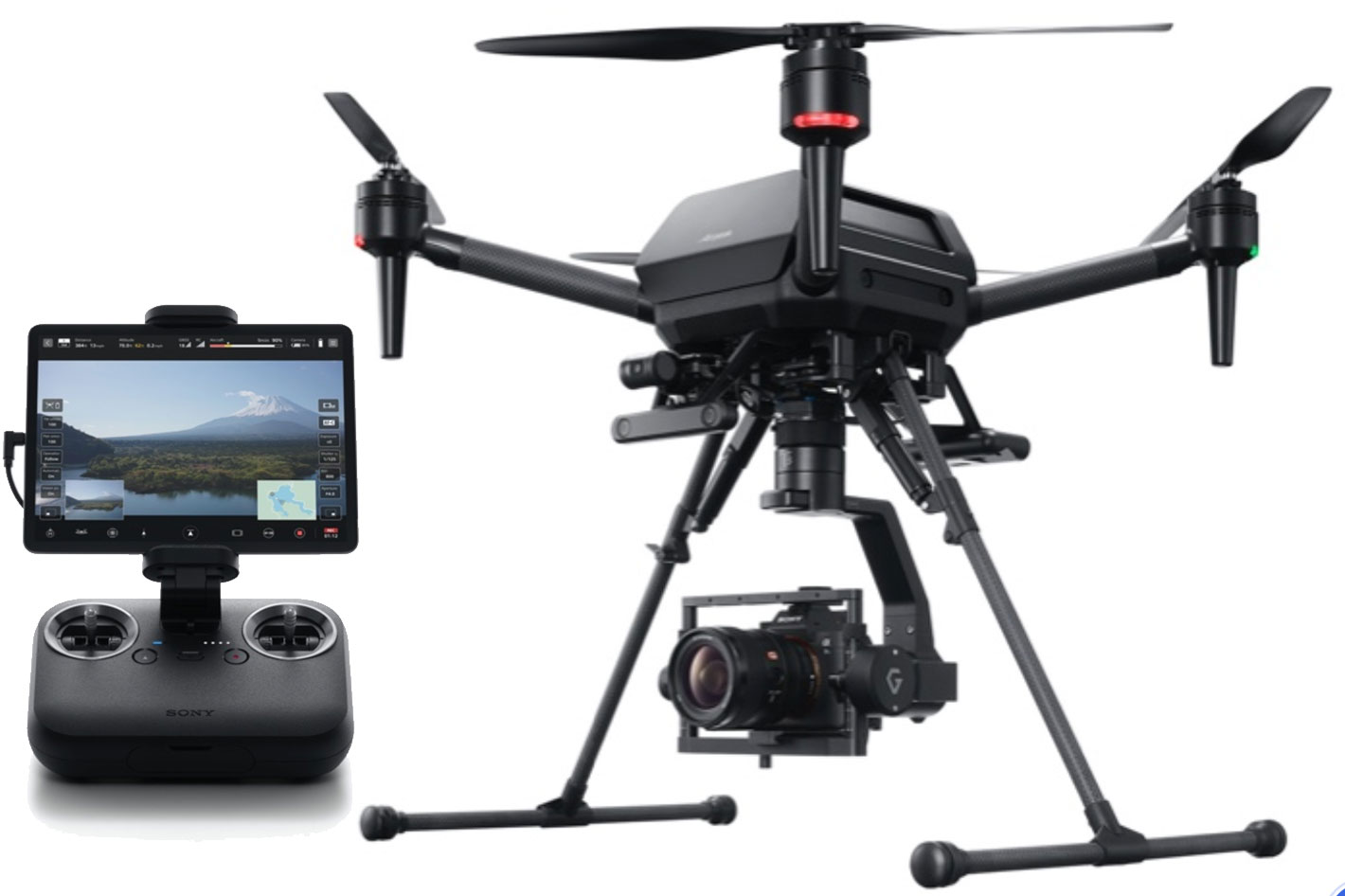 Back in 2015 ProVideo Coalition noted that Sony Mobile was about to enter the drone market, but it took the company until 2021, at CES, to reveal its plans to enter the drone market. On November 2020 Sony announced the launch of its drone project, stating, then that “the recent proliferation of drones has contributed greatly to the delivery of previously unseen images, as well as to workflow efficiency and energy savings in the industrial sector. Sony has assigned the Airpeak brand to reflect its aspiration to contribute to the further evolvement and the creation of the unprecedented value through its imaging and sensing technology as well as 3R technologies (Reality, Real-time and Remote) in the drone area.”

The next step was taken as the Sony Airpeak drone was unveiled to the public at the all-digital CES 2021, confirming the first phase of a project with which Sony aims to fully support the creativity of video creators. When PVC published the news about the drone, we also noted that Sony was developing the drone with feedback from professional drone users but was also seeking collaborators in the United States and Japan to participate in the Airpeak project.

Now the company announces the Airpeak S1, the first model in the Airpeak line, “which has been developed with the intention of contributing to the further development of drones and the utmost in value creation. The commercial drone, Airpeak S1 will be the world’s smallest drone able to be equipped with a full-frame mirrorless interchangeable-lens α camera, enabling dynamic and precise flight with high agility by using a proprietary motor, propeller, control system and sensing technology, and supporting the creative expression of its users to the fullest.” 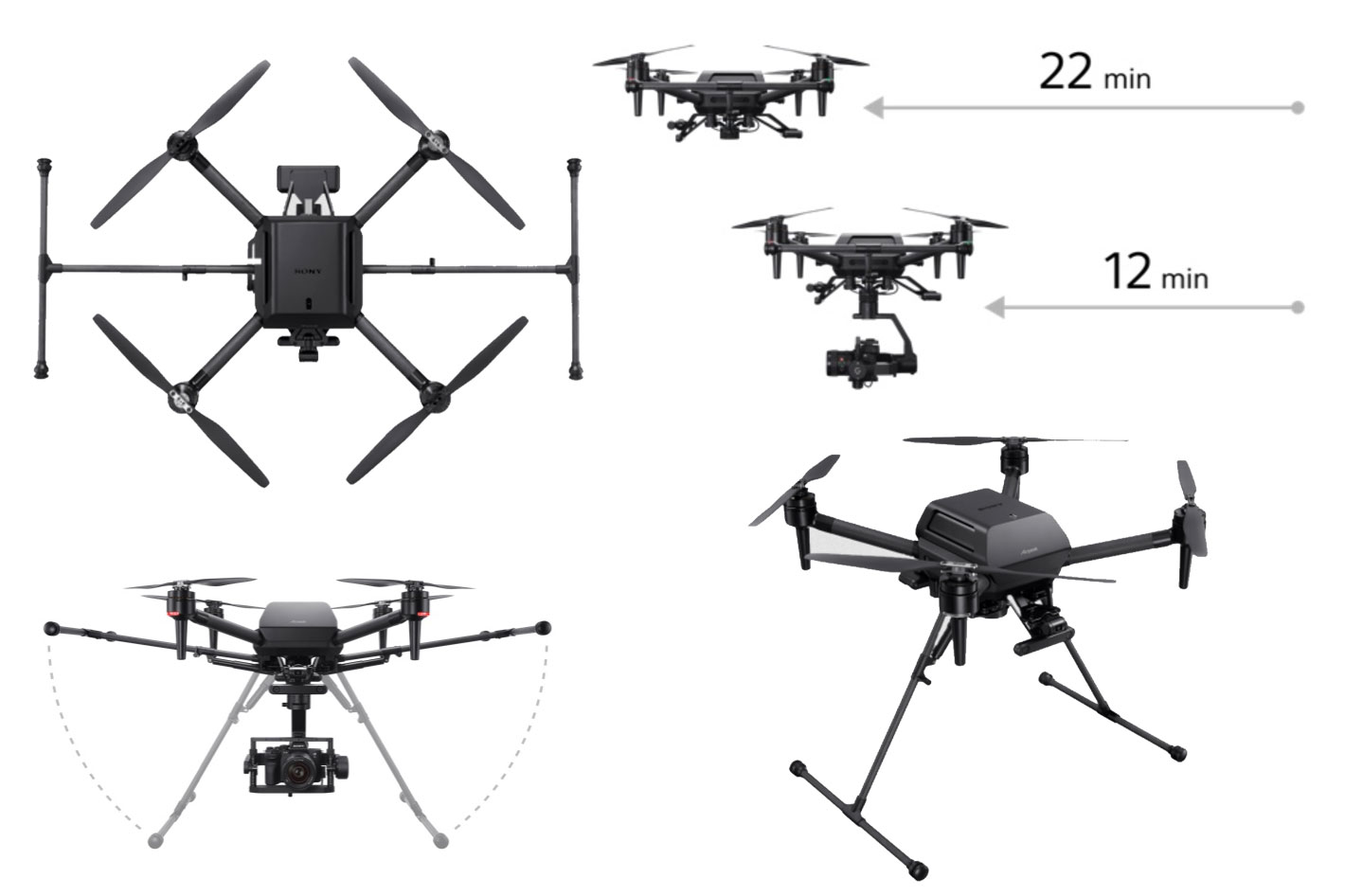 Sony adds that the Airpeak S1 “also supports the production of high-quality aerial images with a remote controller that can control the aircraft at will, obstacle detection and automatic flight control via sensing, and increased flight safety via cloud management of the aircraft and flight information.

The Airpeak S1 reaches a maximum speed of 90km/h, a maximum angular velocity of 180°/s, and a maximum tilt angle of 55°3. The drone has a maximum flight time of 22 minutes without a payload, and can still maintain flight for up to 12 minutes when fitted with a heavy payload like the α7S III and FE 24mm F1.4 GM. The hot-swappable battery allows for power supply exchange without powering down the aircraft for minimal downtime. One important note for creators: Sony’s drone is fitted with a landing gear with open/close legs in-flight, allowing the gimbal to pan without worrying about them appearing into images.

The drone is fitted with sensing technology for flight stability, so it accurately grasps position and orientation using multiple high-performance sensors. Stereo cameras equipped with Sony’s image sensors are installed in 5 locations (front, back, left, right, bottom) of the aircraft. Sony’s Vision Sensing Processor, which processes camera data at high speed, and proprietary algorithms are used to accurately estimate the aircraft’s spatial position and orientation in real time, enabling stable flight even in environments where GNSS reception may be affected or hindered, such as indoors or under bridges. 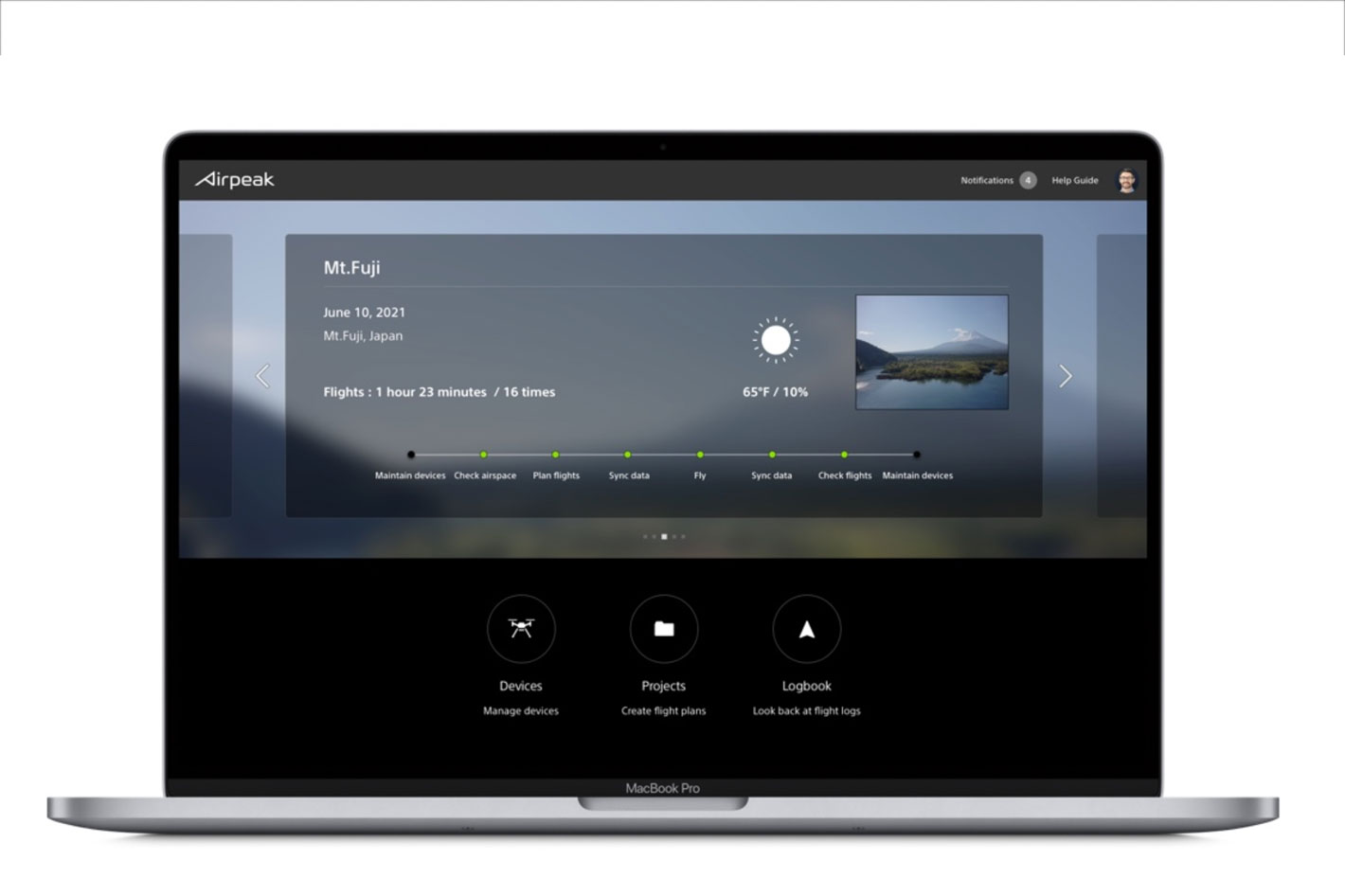 A versatile platform for video

Furthermore, the Airpeak S1 integrates visual information with sensor information such as IMU (Inertial Measurement Unit), direction, barometric pressure, infrared ranging, etc., estimates self-position and attitude with high accuracy, and recognizes the surrounding space in real time. This enables stable flight even under conditions where it is difficult to receive GNSS, such as indoors and under bridges.

The Airpeak S1 can carry a variety of loadouts, meaning filmmakers can choose the right Alpha (α) system to expand their filmmaking horizons: the α7S series and FX3 for high descriptive capability with suppressed noise, the α7R series for ultra-high definition, and the α9 series and others for distortion-free images. The α1, which can shoot footage in 8K, is also compatible, a clear confirmation that the drone works with a wide range of cameras and lens options, making it a versatile platform for video capture.

The system offers intuitive control through the “Airpeak Flight”, a remote controller with high operability and a mobile app that allows centralized control of the aircraft and equipment. Capable of operating the aircraft, camera, and gimbal while checking images captured by α camera in real time.  The iOS / iPadOS compatible mobile app Airpeak Flight integrates the aircraft, remote controller, camera, and gimbal, allowing the operator to monitor status information such as flight distance and remaining battery power, and change various operations and settings on the screen. 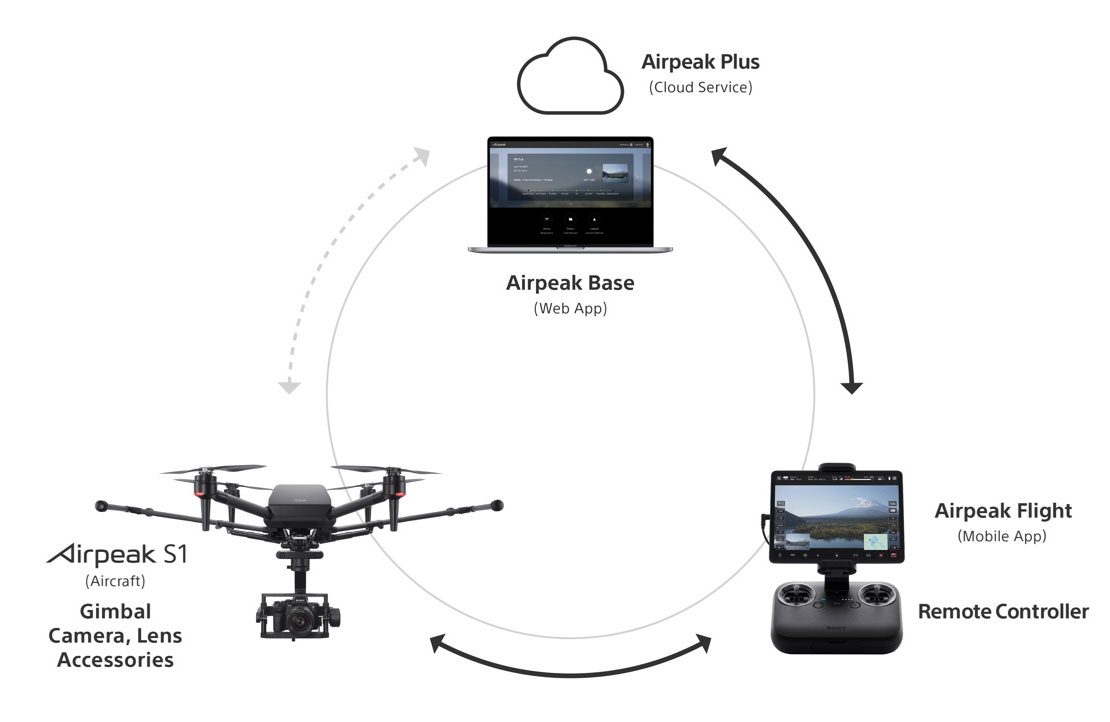 Designed to make workflows efficient, the Airpeak S1 offers automated flight missions through integrated management in the cloud with “Airpeak Base”, a web application that allows the operator to manage equipment, create flight plans, and manage flight logs. In the equipment management, information on the equipment used is automatically listed and managed based on the flight log. This allows the operator to check the condition of the aircraft before going to the field, contributing to problem reduction.

With Airpeak Base the operator can create advanced flight plans and automatically fly the aircraft along the same course many times as if on rails installed in the air. This is a key feature for video production. The system is able to set the position (latitude, longitude and altitude) and speed of the aircraft along the timeline, and specify the orientation of the gimbal and the timing of video or still image shooting. It can also draw smooth curves on the map. Repeat flight is an automatic flight function that automatically reproduces the flight route, gimbal, and camera movements based on the flight logs that have flown in the past. 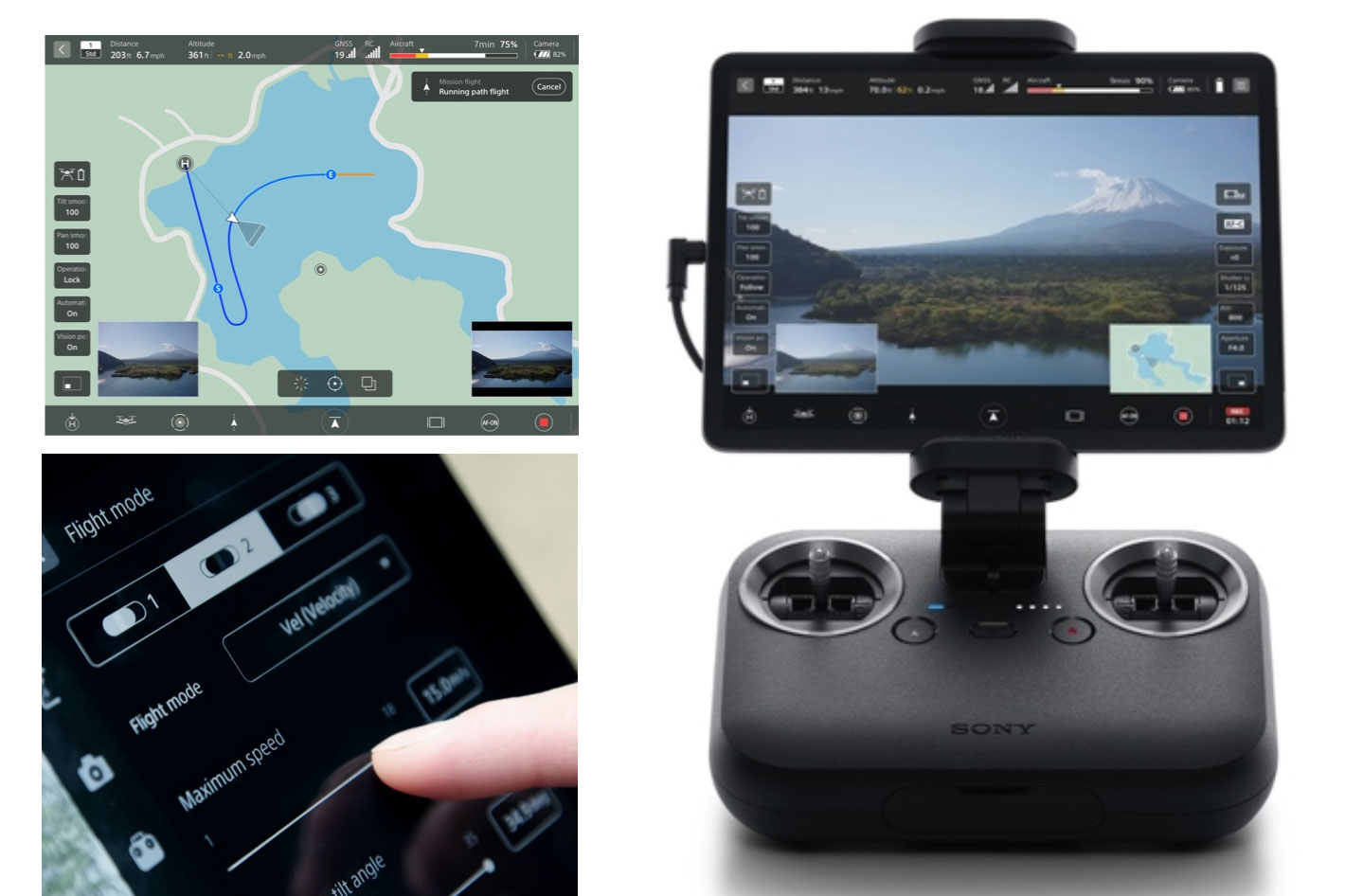 Sony also revealed “Airpeak Plus” a cloud service that allows users to use the rich features of Airpeak Base, and “Airpeak Protect Plan” a service plan to cover accidental damage to the product, will be made available. Further details will be available on the Airpeak website before the products go on sale.

Sony Group will be exhibiting at Japan Drone 2021, a drone exhibition to be held at Makuhari Messe in Chiba, Japan from June 14-16, 2021. In addition, Izumi Kawanishi, Senior Vice President, Officer in charge of AI Robotics Business, Sony Group Corporation will provide the keynote speech in the morning of June 14.