At the Snapdragon Tech Summit 2021 the company revealed Snapdragon 8 Gen 1 will be adopted by global OEMs and brands with the first commercial devices expected by the end of 2021.

Featuring the first commercial 18-bit mobile ISP, the Snapdragon 8 Gen 1 offers for the first time 8K HDR video capture in a mobile platform and it’s capable of capturing 240 12MP photos in one second.

Announced by Qualcomm during the recent Snapdragon Tech Summit 2021, the Snapdragon 8 Gen 1 Mobile Platform brings a whole new level of sophistication to smartphones. The new Snapdragon 8 leads the way into a new era of premium mobile technology equipped with cutting-edge 5G, AI, gaming, camera, and Wi-Fi and Bluetooth technologies to transform the next generation of flagship devices. 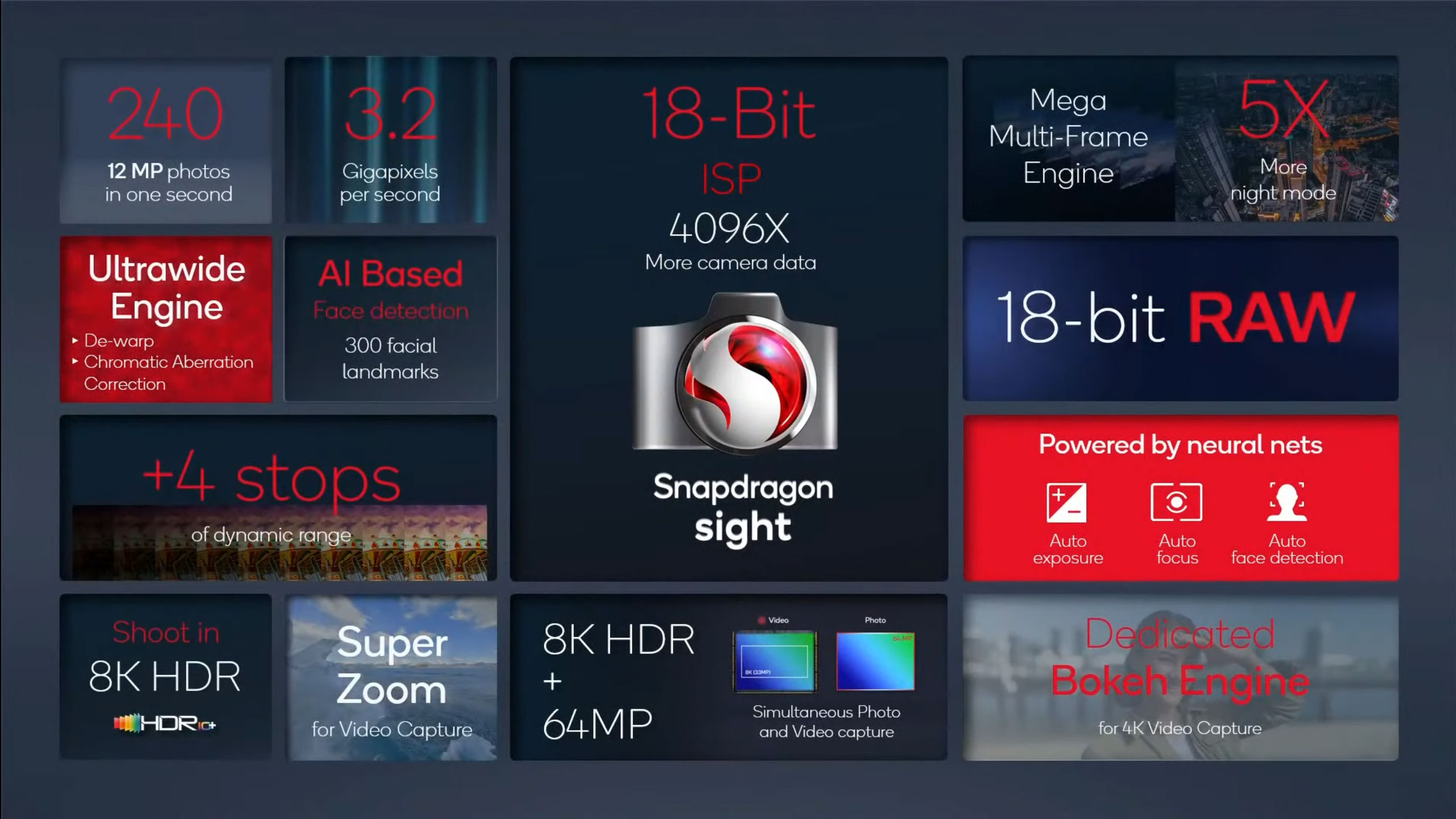 During the summit it was announced that Snapdragon 8 Gen 1 will be adopted by global OEMs and brands including Black Shark, Honor, iQOO, Motorola, Nubia, OnePlus, OPPO, Realme, Redmi, SHARP, Sony Corporation, vivo, Xiaomi, and ZTE, with commercial devices expected by the end of 2021. Expect to see it in the upcoming Xiaomi 12 series, the Motorola Edge X30 or Oppo Find X4 Pro, for example.

“As the world’s most advanced mobile platform, Snapdragon is synonymous with premium Android experiences and the new Snapdragon 8 Gen 1 sets the standard for the next generation of flagship mobile devices,” said Alex Katouzian, senior vice president and general manager of mobile, compute, and infrastructure, Qualcomm Technologies, Inc. “It delivers connectivity, photography, AI, gaming, sound, and security experiences never before available in a smartphone.” 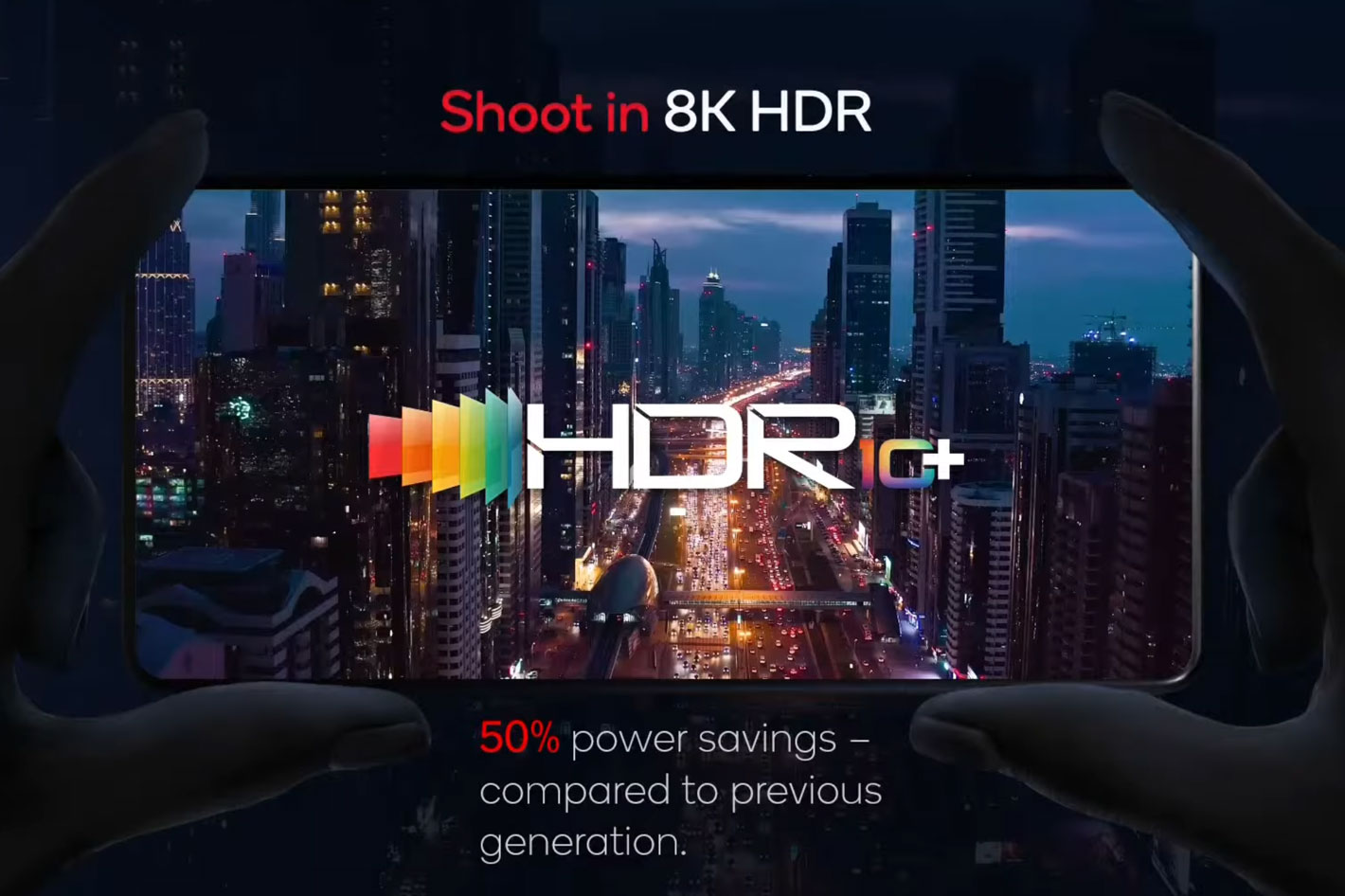 Snapdragon Sight Technology or Snapdragon Sight as it will be called going forward, is the key feature that photographers and videographers have to retain when it comes to the Snapdragon 8 Gen 1. This new premium mobile platform takes smartphone photography beyond pro, says Qualcomm. Snapdragon Sight includes the first commercial 18-bit mobile ISP, capturing over 4000x more camera data than its predecessor for extreme dynamic range, color, and sharpness at staggering speeds up to 3.2 gigapixels per second. 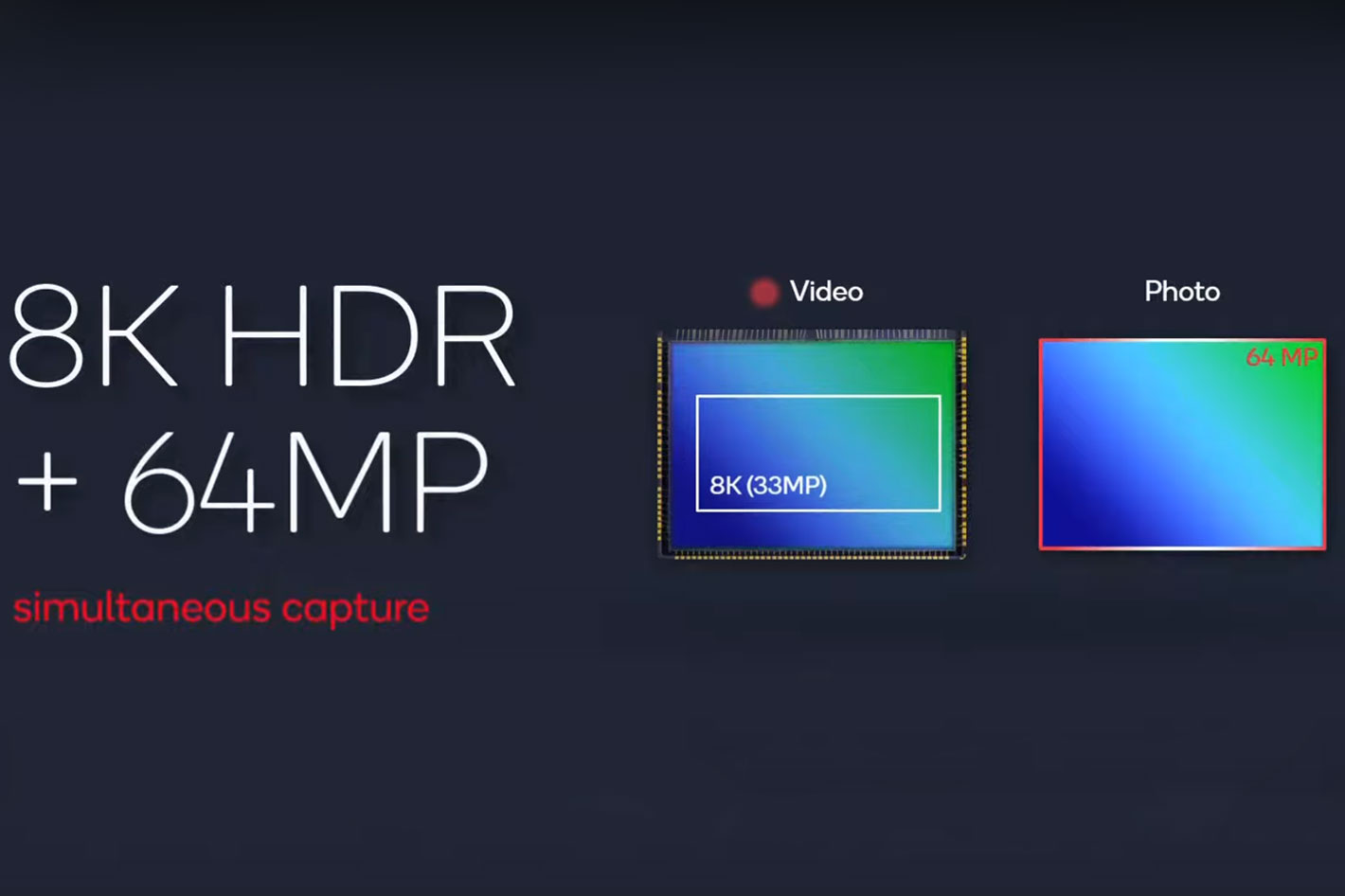 This is also the first time 8K HDR video capture is available in a mobile platform and it’s capable of capturing in the premium HDR10+ format that’s loaded with over a billion shades of color. Video will look even more stunning thanks to the new Bokeh Engine which adds beautiful soft backgrounds to videos; it’s like Portrait Mode for video capture. Snapdragon 8 also includes a fourth separate ISP, the new Always-On ISP, which allows the camera to run with extremely low power consumption so users can experience always-on face unlocking and locking if your face isn’t present for heightened privacy.

Smartphone photography is the resulting of mixing the logic of classic photography with the advancements allowed by Artificial Intelligence and that’s evident here. The 7th Gen Qualcomm AI Engine is equipped with the ultra-high performance and efficient Qualcomm Hexagon processor, featuring a 2x faster tensor accelerator and 2x larger shared memory than its predecessor. Users can capture pro-quality images thanks to intelligently integrated Leica Leitz Look filters—recreating their legendary bokeh effect. 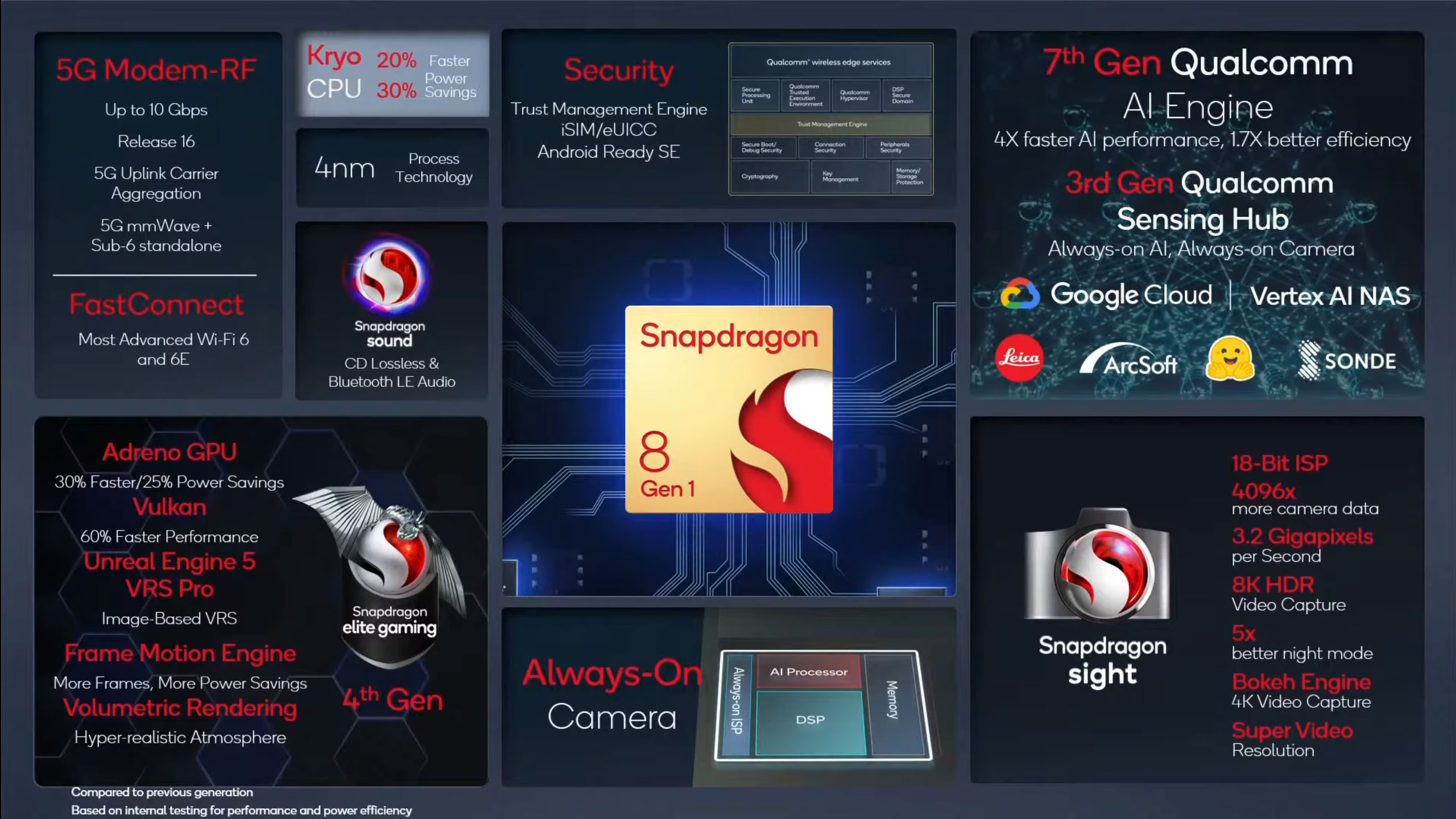 The specifications are staggering, even when compared with the previous generation. The new mobile platform can capture 240 12MP photos per second, that’s double what the Snapdragon 888 ISP can manage. Designed to be compatible with sensors up to 200MP, the new ISP can capture full resolution photos 30 times per second… when used with a 108MP sensor, and this with zero shutter lag. What’s more, the ISP architecture was designed to allow capture from multiple cameras simultaneously, so it can be used to shoot, for example, 3x36MP at 30fps, or 2x64MP at 30fps, again with zero shutter lag. 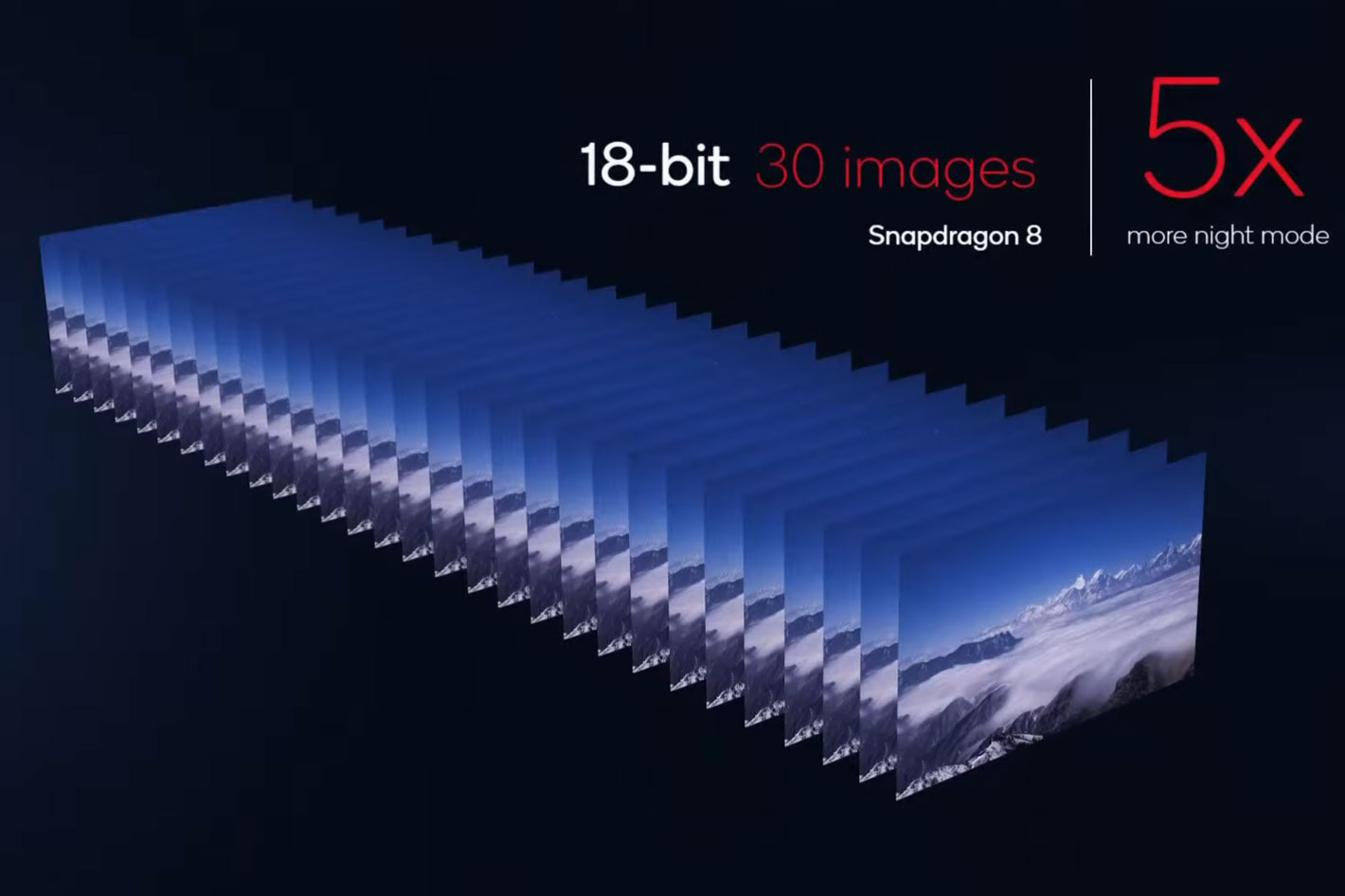 For those who like to shoot night scenes the Snapdragon Sight includes a Mega Multi-Frame Engine that enhances photos taken at night, by combining up to 30 photos into a single frame – against 6 previously – for a result that Qualcomm says is 5X better than previous results.

Video reaches a maximum resolution of 8K at 30fps, with support for HDR (both HDR and HDR10+) – and you can capture 64MB pictures simultaneously – and also offers 4K at 120fps and slow-mo video capture at 720p 960 fps. Electronic Stabilization is included, and Qualcomm has added a dedicated bokeh engine to enable bokeh rendering in videos captured up to 4K resolution. The Super Zoom feature present will improve the quality of digital zoom, making it easier, with large sensors, to forget the need for longer focal lengths. 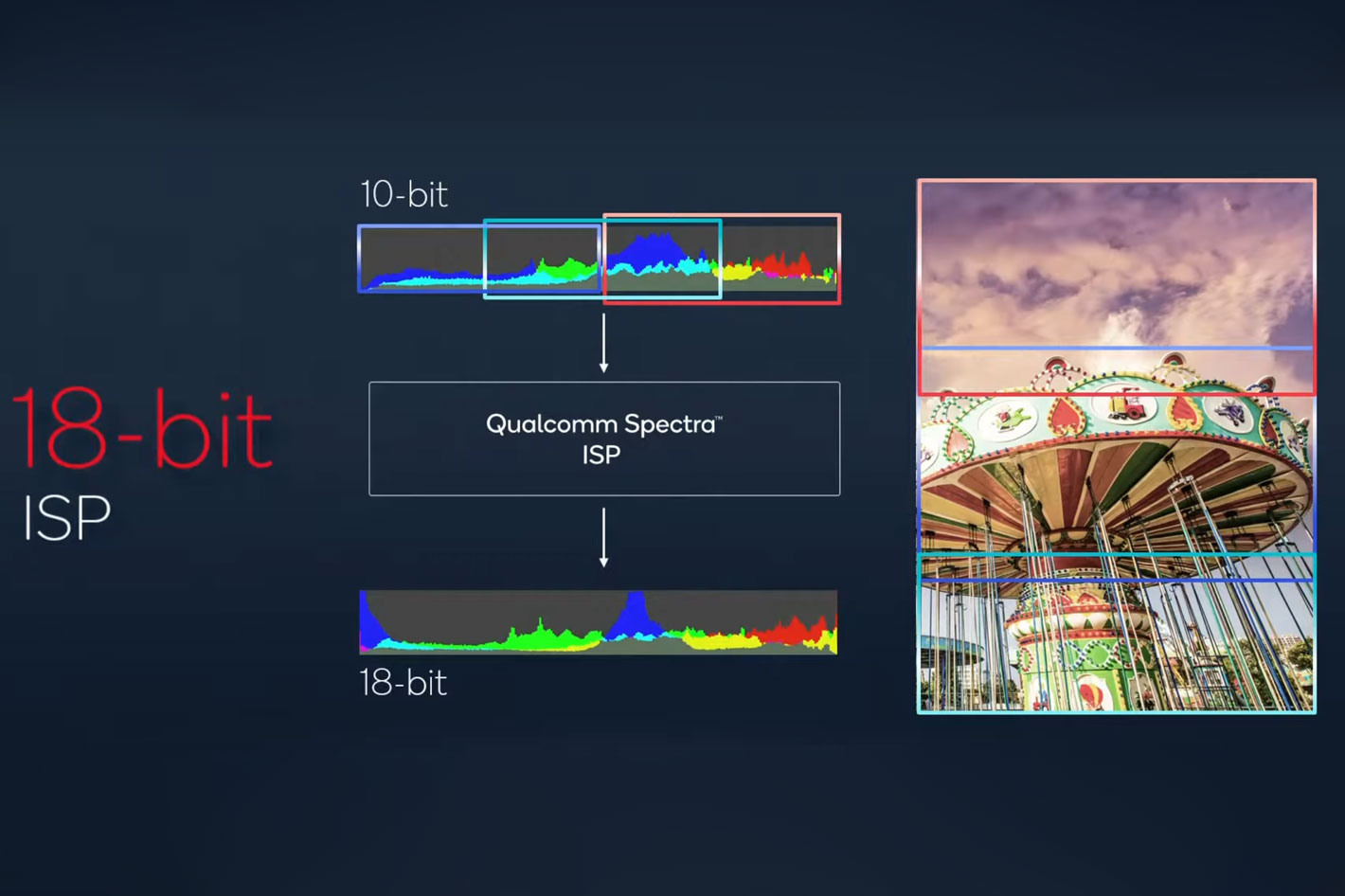 During the presentation Qualcomm’s President and CEO Cristiano Amon said that “the camera is one of the most important features for many users when they buy a smartphone” and added that “smartphone camera is the place where camera technology is evolving is at the moment.” According to Amon, “the roadmap of camera technology now is in mobile, and Snapdragon powers the camera the photographers love.”

From a technology standpoint, Cristiano Amon continued, “we can continue to push the boundaries for higher resolution, higher frame rates, extreme low light performance and rely now in multiple image signal processors to capture images from several lenses, at multi gigapixel speeds and this is going to drive the future not only of photography but computation of photography as we build new technologies of HDR and AI.” He also noted that “with the new technologies being used, anyone with a flagship Snapdragon device can be a professional photographer…” 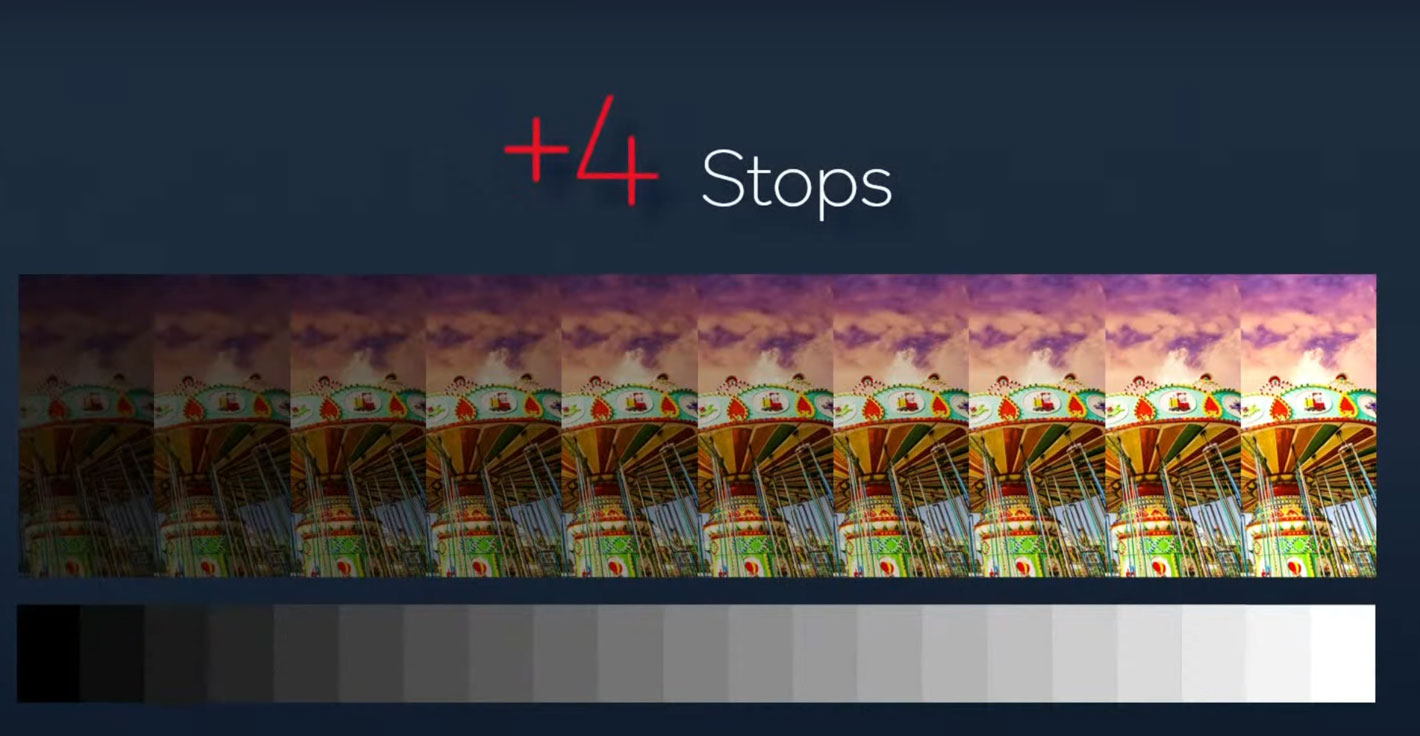 While such a comment must be taken with a grain of salt, as it is not the camera that makes the photographer, smartphone photography is rapidly moving forward and the upcoming devices with Snapdragon 8 Gen 1 promise to offer a huge jump forward and enough features to attract the attention of new as well as experienced photographers and videographers.

Speaking about the camera part of the mobile platform, Judd Heape, Vice-President, Product Management at Qualcomm, said that with 4 extra stops of dynamic range included, a new Leica Leitz Look mode that heralds a new partnership, and all the other features, the “new Snapdragon photographers will shoot professional photos even if they are not professionals”, but added that to professionals, “the Snapdragon 8 brings 18-bit RAW, which can be exported for editing.”

Samsung and Discovery collaborated with passionate local filmmakers to produce the collaborative documentary ‘Eye to Eye With a Tiger’,...