The past year has challenged the post-production industry in many ways and it has introduced changes, like remote operations, that will now be part of regular workflows. 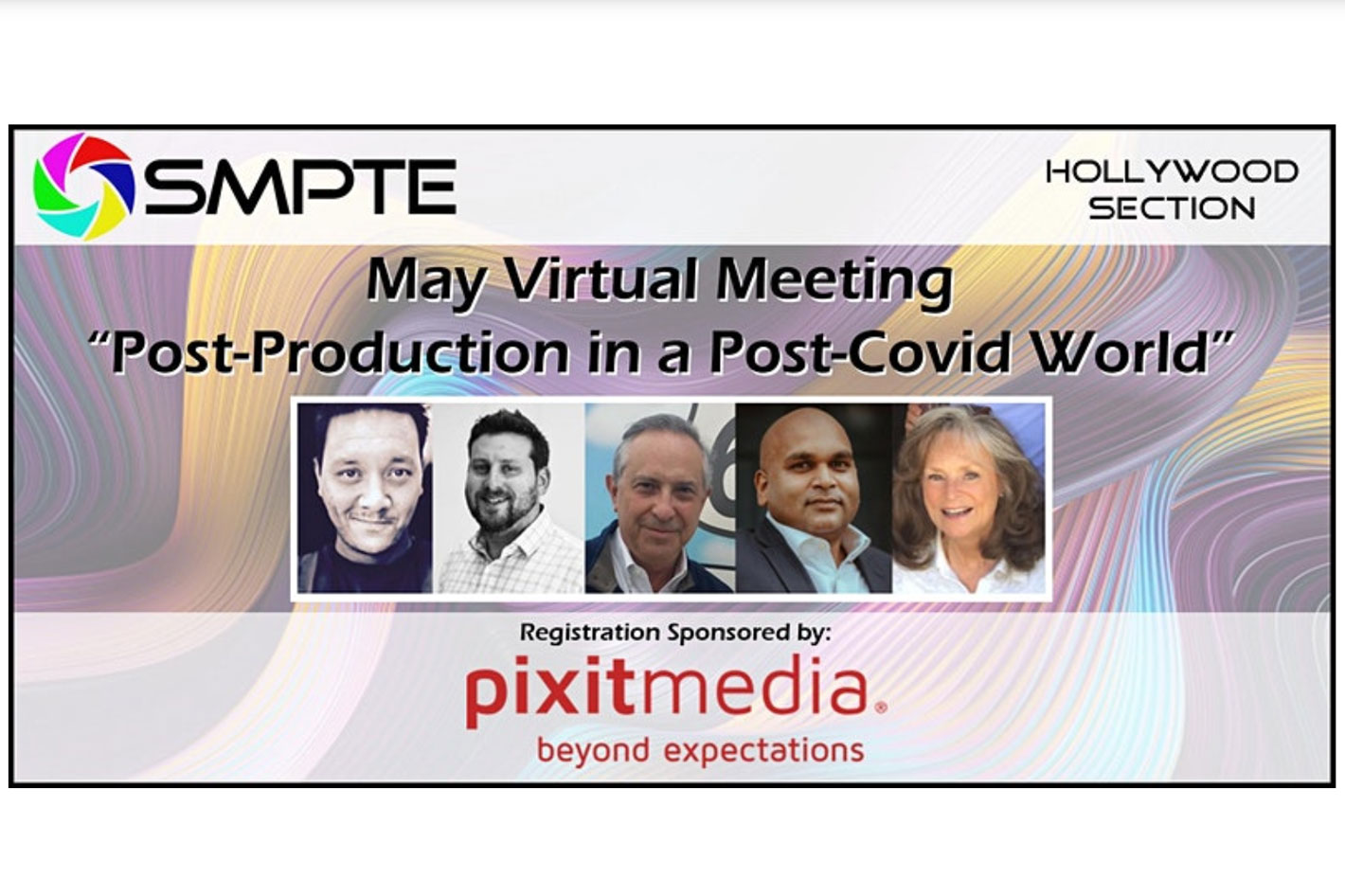 The  Hollywood Section of SMPTE will host a panel of post-production leaders for a lively discussion on the industry’s future through covid 19 and beyond. It’s on May 27th at 6:30 p.m. PDT.

“Post Covid Post” is the – short –  title of the May meeting organized by SMPTE Hollywood, in which participants will discuss post-production in a post-Covid world. It’s, as expected, a virtual meeting, slated for Thursday, May 27th at 6:30 p.m. PDT… on Zoom. Virtual meetings and remote work became new terms for the industry the past year, as communities worldwide entered lockdown, technology manufacturers, post-production service providers and studios had to quickly develop ways to finish projects remotely. It’s only natural that Zoom continues to be, now, the way to link people and share ideas.

The past year has challenged the post-production industry in many ways. But it has also created the base for new horizons in terms of how the industry works. Although a sense of normalcy is beginning to return in some regions, remote operations have become ingrained in workflows and may not go away, even when the crisis is over. What forms of remote work are likely to continue? Will post-production specialists no longer work together in the same room or under one roof?

Post-production in a post-Covid world: the panelists

Experts from different sectors of the industry will share views on how work in their world has changed forever during the “Post Covid Post” event organized by SMPTE Hollywood. The event is produced for Hollywood SMPTE by Linda Rosner and Belinda Merritt. The meeting will be preceded by a 20-minute breakout session where attendees can socialize with friends and colleagues in separate rooms. The event will also be live-streamed on the SMPTE Hollywood Facebook and YouTube pages.

Here is some information about the panelists and moderator:

Adam Imada (Executive Director, Production Post Solutions, Sony Pictures Entertainment) manages a department responsible for deploying and supporting picture editorial systems for the Sony Pictures Motion Picture Group labels Columbia Pictures and Screen Gems, Sony Pictures Television, as well as third party productions. His team also oversees production sound on the lot. Imada has been with the department for over 14 years assisting with hundreds of productions and continues to be energized by the evolving landscape.

Stephen Shapiro (Manager, Technology Post-Production, Technology Development, Sony Pictures Entertainment) began his career as freelance assistant editor, before transitioning to technology development at Sony Pictures Entertainment, where he applies his expertise in post-production and editorial workflows. He enjoys workflow design and implementation for all aspects of production including visual effects, picture and sound.

Larry Chernoff (CEO, MTI Film) began his career as a film editor in New York City and since then has helped to found and lead many post production companies in the Los Angeles area, including FilmCore, Encore and RIOT. He went on to become President of 4MC, later Ascent Media Group Creative Services, heading its Los Angeles, New York and London operations.  In 2017, the HPA honored him with its Lifetime Achievement Award. Chernoff brought this history and expertise to MTI Film, first as a Board Member in 2003 and then as CEO since 2005. His vision and experience have helped keep MTI Film’s flagship products, DRS™ NOVA & CORTEX on the cutting edge of post-production technology. Chernoff’s latest endeavor, the MTI Remote Center, provides an infrastructure for Avid editors and assistants working remotely on episodic television.

Belinda Merritt (Director, Sales & Marketing USA, pixitmedia) has worked in media and entertainment for more than two decades. Highly regarded for honesty, fairness and trustworthiness, she applies her business development and sales strategy skills across the ever-changing digital entertainment landscape.  With a keen eye for revolutionary technology, she had aided in the launch of several groundbreaking media workflow solutions, including non-linear finishing tools, digital negative (which laid the foundation for DI) and, more recently SaaS cloud products. At pixitmedia she works at the forefront of hybrid storage and cloud solution workflows.