For the past 15 years, Phillips Street Church of Christ, a small 140-person congregation in Dyersburg, Tennessee, has been using streaming technology to bring their live worship services and teachings to the world.

Patrick Cupples, Deacon, Media and Technology, realized a few months ago that the church’s streaming production setup needed a complete overhaul. He explains, “We were using SD video cards to input standard video into Adobe Flash Media Live Encoder so we couldn’t stream HD quality. Plus we were experiencing dropped streams and frames with our setup. We felt that the quality of our broadcasts was suffering and we knew that our audience deserved a better viewing experience.” 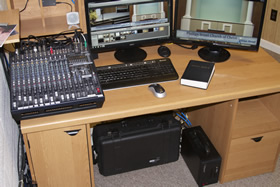 Although the church only had a modest equipment upgrade budget, Cupples began researching on-line and came across a turnkey system based upon Telestream’s Wirecast Pro live streaming production software and the Matrox VS4 four-channel capture card. “The system immediately caught my eye. It claimed to offer affordable, high-quality multi-camera ISO recording and HD quality live streaming, which was exactly what I was looking for,” says Cupples. Although he is an accomplished, self-taught video enthusiast, Cupples knew that a turnkey system was a requirement since he was not interested in integrating components.
Phillips Street Church of Christ broadcasts live worship services to their homepage in HD. 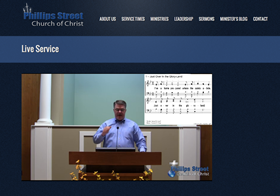 After consulting the list of Matrox Certified System Builders that Telestream publishes on its web site, Cupples quickly zeroed in on 1Beyond, a Boston-based System Integrator (SI) that offers the StreamMachine, a portable, rugged streaming system with an external monitor and KB console. The church also broadcasts youth group devotionals and plans are being made to transfer the broadcast of a bible program that records from a college in Kentucky to mobile broadcasting at various locations. This program will air on local TV stations so they couldn’t have tower-type units because of their lack of portability. Cupples was also impressed with 1Beyond’s responsiveness and the high caliber of their support. “We had a stream up and running less than an hour after the unit was delivered to us. The entire process from the time I first contacted them to the time we became operational was less than eight weeks,” explains Cupples. 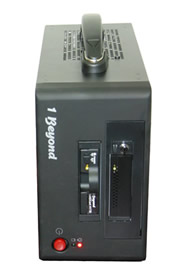 Phillips Street Church of Christ uses the StreamMachine to broadcast, in HD, three live worship services per week to their homepage. The audience is primarily parishioners unable to attend church because of age or infirmity and individuals who live in remote locations. Interestingly, a significant number of viewers are in China.

The live production is streamed to a Wowza server at 720p with a bitrate of just under 4Mb/s and is hosted on the Phillips Street Church website. The original stream is captured via Wirecast Pro record to disc feature at the same quality as the stream, while the production is live and streaming. Concurrently, Cupples uses the Matrox ISO feature to record the original video sources for editing after the service. The sermon portion of the service is archived for on-demand viewing. Sermons are uploaded to the church’s YouTube channel, which links to the church’s website. 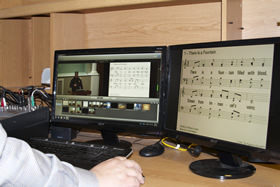 As soon as the service finishes, Cupples turns to Adobe Premiere Pro as his editor. Using the original production recording (i.e., stream), he mixes in ISO records, pictures, graphics, and slides to create lessons from the sermon of the day, and exports and uploads to YouTube. “The new workflow provided by the turnkey solution saves me a lot of time compared to our old setup,” says Cupples. 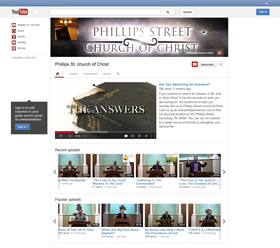 The four independent video inputs on the Matrox VS4 card, lets Cupples connect three Canon HFM 41, high-definition 1080p cameras using inexpensive HDMI to SDI converters. The fourth input is being fed by a computer to introduce PowerPoint slides to the productions. The church is 125 feet deep by 100 feet wide and the studio is located on a second floor, 20 feet above a balcony, which results in cable runs up to 150 feet. The Matrox VS4 was designed specifically with this in mind and uses SDI connectivity, which allows for cable runs of 300 feet for HD signals and 1,000 feet with SD signals. HDMI cables are not designed to run more than 30 feet. “Despite the converters and long runs, there is no degradation of the signal,” says Cupples. The production’s audio comes from a separate source; the church’s soundboard, and is introduced to the StreamMachine via the integrated sound card. Wirecast allows graphics including bugs, lower thirds, captioning, song lyrics, and “commercials” to be added prior and after the service.

Because he relies upon church volunteers to run the video production equipment, Cupples knew that the upgraded streaming system had to be easy-to-use. “We’ve discovered that operators only require one service, which lasts no more than a couple of hours, to become proficient. In fact, my 12-year-old son runs the equipment like a pro!”

Patrick Cupples believes that the ease-of-use and affordability of a Telesteam Wirecast Pro / Matrox VS4 streaming solution gives small congregations of 100-200 parishioners the ability to deliver professional, broadcast-quality live worship services. “Phillips Street Church proves week after week that this can be done.”

The Matrox VS4 Quad HD Capture and Telestream Wirecast Pro Bundle is available now at Videoguys.com for $2,395.