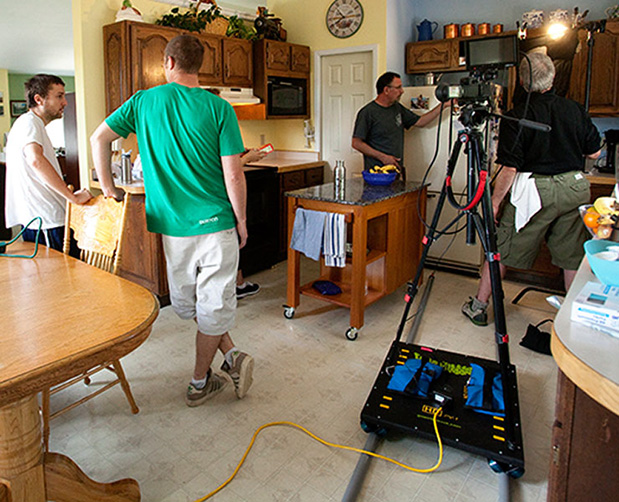 The screenplay follows a female robot looking for love in a human world. The budget was, well, non-existant, but by calling in friends and favors with some of the inexpensive tools that are available to filmmakers today co-producer/directors Jay Shaffer and David Smart made a success of a completely self-financed project.

The first iteration of “Love and Robots” was a short student film by David Smart, at that time a student in Jay Shaffer’s video editing class at Front Range Community College in Westminster, Colorado. Jay Shaffer is a filmmaker and instructor at the college. Over the summer of 2011 Jay and David did a significant script rewrite before remaking the film as a short for the festival circuit. 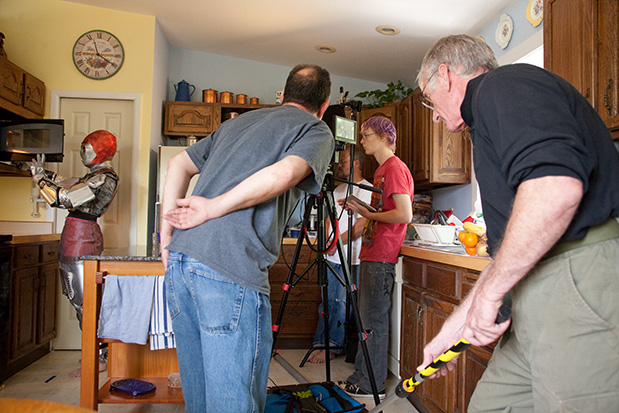 Jay’s HDSLR cameras, a GoPro, existing computer editing gear and lighting kit formed the backbone of the equipment. Jay asked me to do production stills on set and Karl to bring and operate the Guerrilla Track dolly tracking system he developed. The suit case sized dolly added professional production value and fit neatly into the tight spaces and doorways of the home setting. 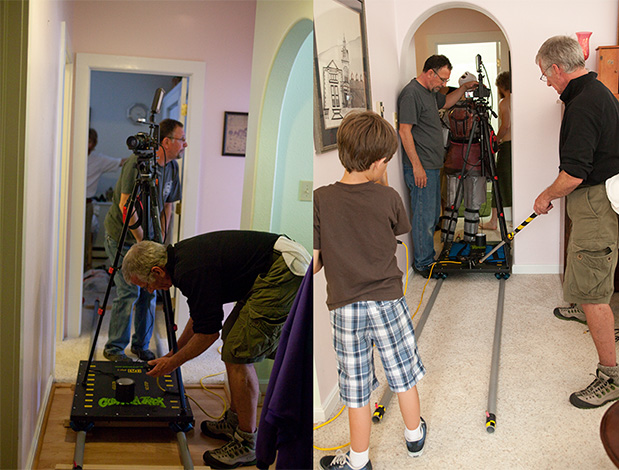 Cardboard box costumes were used in the original student film. It was obvious that serious funds needed to be allocated to be acceptable for the indie circuit. The new robot wardrobe was fabricated from a combination of Star Wars costumes, skate pads, foam mats, rubber balls, kitchen gadgets, tubing and yes, some cardboard. Hot glue and chrome spray paint were the secret ingredients. The costume build was one of the major expenses and headaches of the production, because of constant adjustments. But they look great on camera! 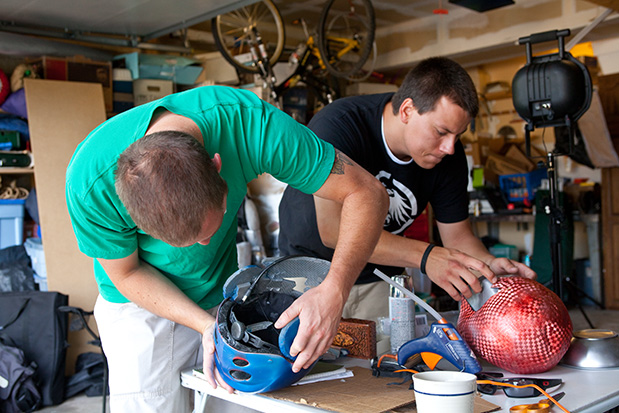 The biggest lesson learned was that, like shooting with children or animals, full coverage costumes slow the production pace to about half of normal. For the actors, home-made costumes that cover the entire body and face are hot, fatiguing, difficult and just plain claustrophobic. Breathing is a chore. The film was scheduled to shoot in three days but ended up taking four. Dave and Jay gave endless praise and sympathy to the actors for having to work in one hundred degree heat with full helmets. By the end of production there was no love lost between the actors and their robot costumes.
Craft services was the the other major expense – no surprise there. Jay said that “If you’re going to ask people to work long hours under difficult conditions for free, you need to make sure you show your appreciation by feeding them well.” Crews eat a lot during 12 hour + days. But having time to sit, eat and drink really restores body and spirit for the non-paid crew. I note that this is something clients in the wedding and event market have never figured out. They expect 12-14 hours days, and never want to feed their staff, or give them a simple green room for a few moments rest. If you provide for your crew you get twice the work!
“Love and Robots” was mostly shot on a Panasonic GH2 DSLR camera in 1024 full HD at 24FPS at 24MBs. Jay acted as DP/cameraman, and used a combination of Canon and Minolta 35mm still camera lenses with the GH2 camera. He especially favored the Minolta 35-70mm F2.5 and the Canon 28mm F2.8 lenses. A very simple crane accomplished the final sunset scene, shot with the GoPro. 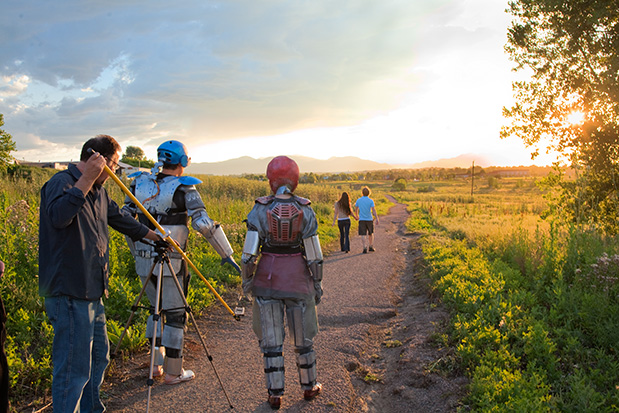 Perhaps it was both bold and foolish that Jay decided to edit using the newly released Final Cut Pro X. Final Cut Pro X is still at this writing suffering from well-documented teething pains, and many filmmakers are switching to other edit software to edit their projects. While valuing many of the editing, syncing and color correction features of the new Final Cut Pro, media management and audio features fell short of needs. To achieve his vision he exported the final “picture lock” cut with a single dialog track back to Final Cut Pro 7 so that he could do the sound mix in Soundtrack Pro. That made it possible to export versions with separate dialog and music and effects tracks.
Overall the 17 minute film was shot for a little over $2000, thanks to the dedicated volunteer cast and crew. By using ingenuity and high-quality, low-cost gear like DSLRs, filmmakers can make a great film on a tight budget.
Want to see the film trailer? Click here.