The tiniest and lightest ever full frame anamorphic lens has arrived. The SIRUI Saturn 35mm Carbon Fiber Anamorphic Lens is now available at a special price for launch: $1099. 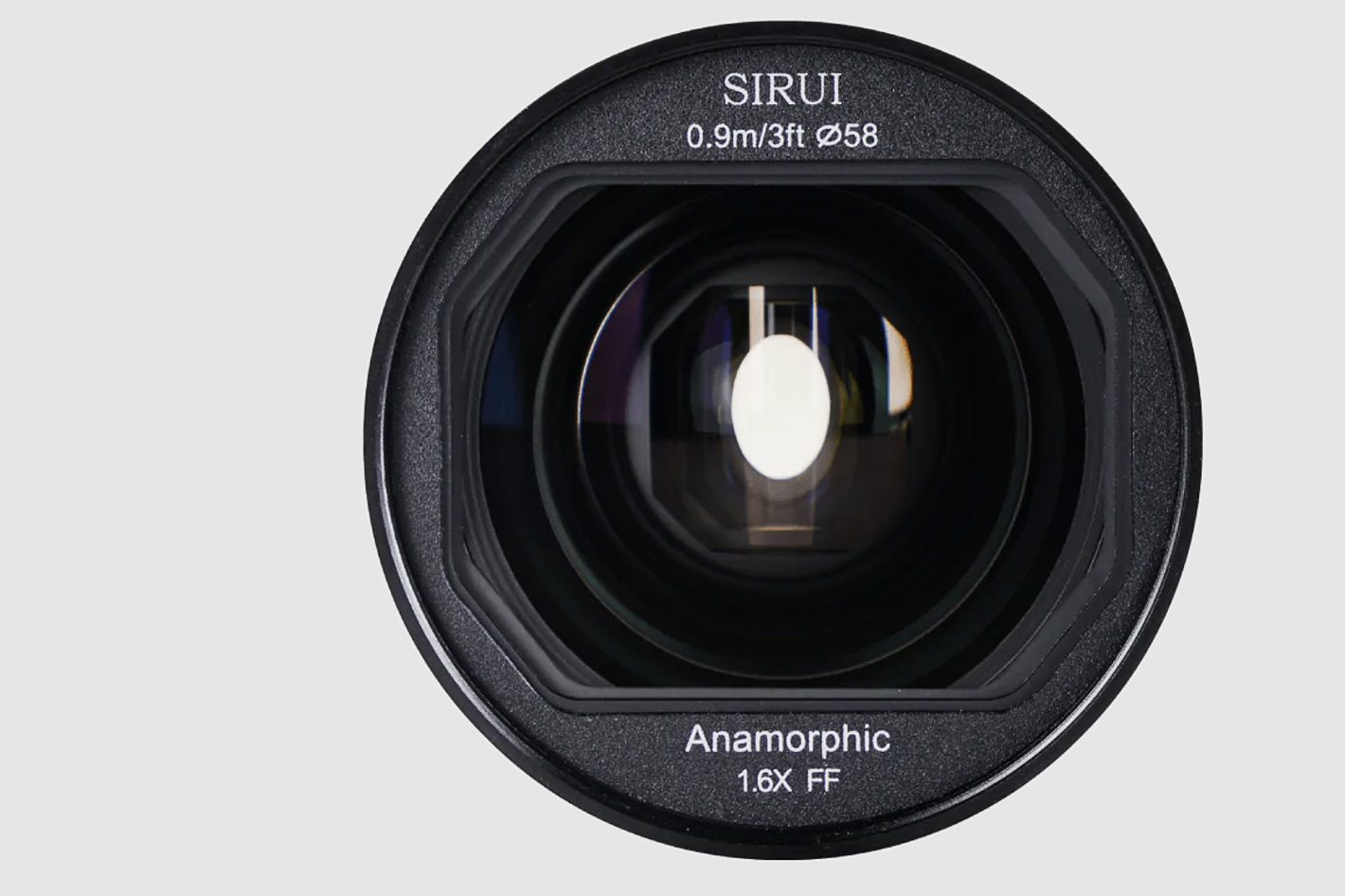 With a 1.6x constant squeeze ratio, eliminating the “Anamorphic Mumps” effect on the subject, the Saturn 35mm lens has a body in carbon fiber, making it the lightest lens of its type: 400g!

Available in Sony E mount, Canon RF mount, and DJI DL mount, the SIRUI Saturn 35mm is ideally suited for when you need to shoot with light equipment: the lens, with a body in carbon fiber, weighs only 390g in the DJI DL mount,  with the version for Canon RF mount at 425g, and the Sony E mount version weighing less 10g, at 415g.

This lens is even smaller than a smartphone. When used on cameras or other setups, the overall weight remains favorable. The size and weight make the lens ideal for shooting aerials with any type of professional drone, including medium-sized FPV drones. With the Tilta Hydra Alien Car Mounting System (V-Mount), can be used with stabilizers (DJI RS 3, RS 3 Pro, or RS 2).

SIRUI says that when shooting cars, the use of light equipment with the high-speed movement to increases the effect of stability, to make the results better, and adds that when handheld, the lens is also a better choice, because it’s compact and light, noting that “usually with lighter full-frame micro-single cameras such as SONY A7S3, CANON R5, lighter lenses can reduce the burden of stabilizers”. To sum it up, SIRUI claims that this lens can be used in almost any scenario you can think of to capture stunning shots. 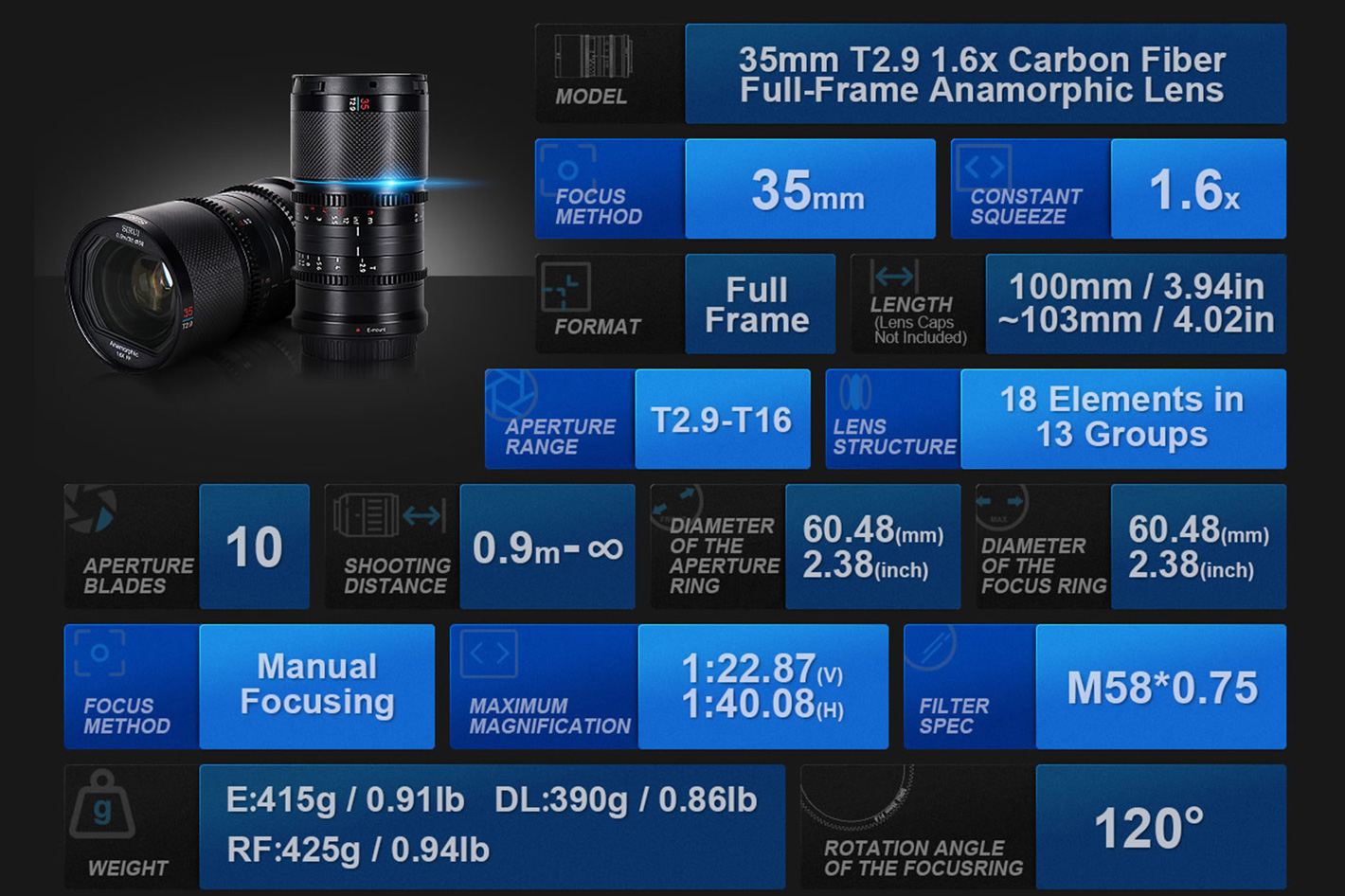 According to the company, most budget-friendly anamorphic lenses fail to maintain a constant squeeze ratio at all focusing points, which results in a strange look of the subject when de-squeezed. SIRUI’s R&D team resolves critical technical problems to make the Saturn 35mm a 1.6x constant squeeze ratio lens, eliminating the “Anamorphic Mumps” effect on the subject. Equivalent to the horizontal FOV of a 22mm FF lens, the Saturn 35mm can capture both magnificent and narrow shots.

SIRUI also notes that the 1.6x squeeze factor renders a shallower depth of field, more elongated bokeh and a stronger sense of compression than the 1.33x, which is helpful in separating the subject from the background and adding an artistic touch to your film.

With an aperture range of T2.9-T16, 10 aperture blades, able to focus – manually – from  0.9m to infinity, the lens the lens maintains a constant 1.6x squeeze ratio at all focusing points, meaning that the subject size doesn’t change as you pull the focus.

When it comes to flare, the lens offers two options: Blue and Neutral. The neutral-colored flare that provides more control over the flare color. Its color changes according to the light source, and it can be relatively subtler and less distracting.

Ideal for creators who want a compact, lightweight lens that can handle a wide range of scenarios, the SIRUI Saturn 35mm Full-frame Carbon Fiber Anamorphic Lens has a regular price of $1,299.00 but can be acquired with a special launch price of $1099.

Also recently, SIRUI launched an interesting lighting solution that you may want to check. The SIRUI Dragon Series B25R bendable RGB LED light can be bent inwards or outwards to properly illuminate a subject. The curved light beams created by the B25R separate the subject from the background and lend it a premium look. Available for this Black Friday period at a special price!