How to use shutter speeds you never thought possible with flash to open an amazing world of possibilities. 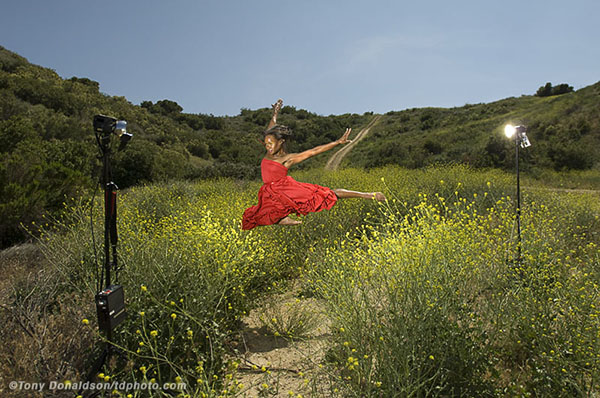 Back in the earliest years of the 21st century, when many of us were just switching to digital, any DSLR with an interline-CCD had a fantastic advantage. It would sync with flash at ANY shutter speed. The early Nikon D1, D1x and D1h, as well as the Canon 1D and a couple of others had this. They don’t use the physical shutter to make an exposure. Instead, the shutter gets out of the way, and the sensor is read for the desired amount of time.

Most claimed they’d sync at 1/500, and any dedicated flash would keep the shutter speed there or below. But hooking up a set of portable strobes like the Dynalite Action Pack allowed sync at all speeds (though after 1/4000 of a second, give or take, the camera reads the exposure for less time than the flash duration so you start to lose light). The camera was unaware of the flash other than firing the impulse, and that was fantastic for overcoming harsh sunlight without having to use a grip truck full of lighting.

These cameras were all under six megapixels, and performance was king over battery life. Anyone who has owned one of these battery-devouring cameras knows what I mean.

As things progressed, however, and CMOS became the sensor of choice for most of the cameras, a physical shutter was required and sync speeds dropped back down to 1/250 second or slower. This makes shooting in difficult light situations, like harsh, midnight sun, way more difficult. You can use reflectors, but that’ll make models squint. You can use flash, but it requires either a ton of power and no light modifiers, or ten tons of power to use things like softboxes, etc. Yes, a silk overhead helps, but won’t make the background do what you want it to. And you’ve little control over depth of field, unless you want to use a neutral-density filter and even MORE power for your strobes.

There’s a solution I read about online and now use constantly. If you’re a technical geek, prepare for an “A-Ha!” moment. If you’re less technically inclined, this may not be for you.

Nikon and Canon both have ways around this for their portable flashes, like Nikon’s SB800 or Canon’s 580EX. They start firing, actually strobing, as the shutter slit travels. On a shutter speed twice as fast as the sync speed, it flashes twice. Once when the second curtain starts following the first, and once when it’s made half it’s journey. The result is amazing, full coverage in any situation. But at a cost. You have to be using their dedicated flash, capable of this, and in full communication with the camera. And the faster the shutter speed, the more strobing the flash does to cover it and the less power you have.

There’s a way to harness this to use with your big studio strobes (even the portable ones), to allow this to fire the flash and be able to (sort of) sync at any speed. It’s not what the cameras were designed for, nor is it a planned feature by the engineers. Calling it a “hack” isn’t necessarily accurate, you’re not opening the camera, reprogramming it or doing anything that will void any warranty. It just requires that you understand how it all works to exploit this feature to allow you to do something really useful in some situations.

You will need a DSLR that is capable of this high-speed sync, and the dedicated flash from that manufacturer. Set up the camera to fire this way, read your manual for instructions on how to do this. The flash will be on top of the camera in the hotshoe. I usually set mine on manual to 1/128th power (the lowest it will go). You won’t need that flash to light anything, so you might as well cut down the load on the batteries, capacitor and flash tube. All that’s doing is tricking the camera to fire the flash right as the second curtain starts moving. Not the same thing as setting second-curtain sync.

Attach your strobes via a sync cord or using a wireless trigger. I know Pocketwizard says it works to 1/500, but I’ve had it work fine at 1/5,000th just as well. Your mileage may vary, so test it. If it’s not syncing, try hardwiring to your pack/head and see if that works. Optical slaves also work, I’ve had good luck with the Wein Ultra slaves, great for daylight use. You can trigger the pack with optical slaves and your on-camera strobe, just be careful the on-camera light is weak enough not to register on your subject.

Set your strobes at their highest power. You want the LONGEST flash duration. What this does is makes sure that the flash is lit fully for the entire time that the shutter is travelling, so it lights your subject evenly. Interestingly enough, this then makes your strobe into a sort of hot light. The shorter the shutter duration, the less light your subject gets.

It takes some testing and practice, but this allows you to use flash to overpower or match the sun, even in mid-day. It also freezes subjects in ways you never thought possible. Try completely freezing anything moving fast at 1/250 or 1/200. It likely won’t be completely frozen. And you’ll need a lot of light to deal with the smaller aperture. When you’re in bright sunlight and able to control the ambient with the shutter and still light everything the way you envisioned it, you have a level of control over that situation and your vision that you never thought possible. 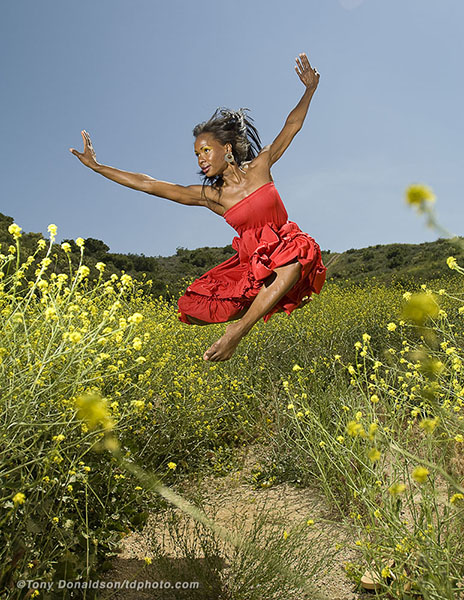 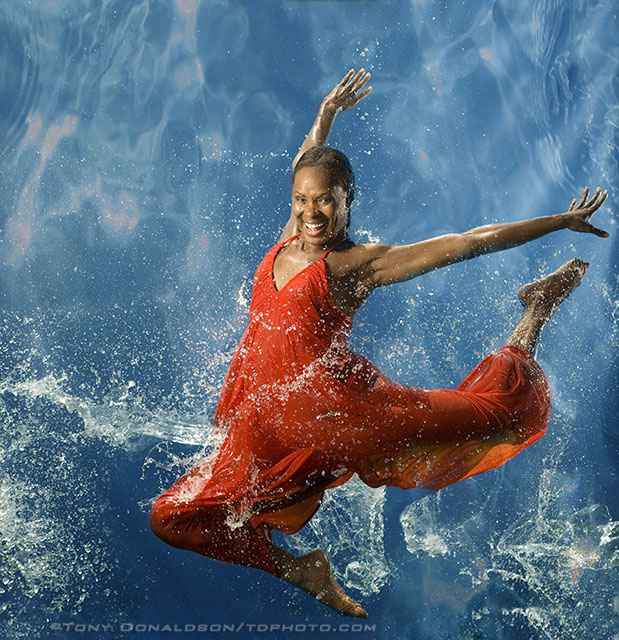 Here’s an image made outdoors. The dancer is 10 feet in front of a blue background (water ripples added in post). She’s lit from the front 3/4 (camera left) with a strip light with two Dynalite 2000 watt/second packs into one bi-tube head. Side lighting provided by both Dynalite and Lumedyne bare heads, and a couple of heads on the background to light it. This is in the middle of the day, sun overhead, and I’m shooting at 1/2000th of a second at almost f/5.6 to freeze the water and tame the harsh sunlight. Triggering is done with Pocketwizard Multimax and Plus II units, plus one old-school original PW unit. The hardest part was getting the timing of my two assistants throwing buckets of water from either side!