Shotgun Software, the pipeline tools developer for the visual effects and animation industry, today announced a new asset management solution called Tank, designed specifically to support rapid and constant pipeline evolution, while organizing and automating a studio’s file-based workflow. Tank is the third product available from Shotgun Software and is built on top of the Shotgun production tracking platform alongside Revolver, its all-in-one review and approval toolset. Shotgun Software will be demonstrating Tank at the SIGGRAPH Conference (Booth #837) at the Los Angeles Convention Center from August 7-9, 2012, and will host its annual User Group Meeting on Tuesday, August 7 at 2:00PM. 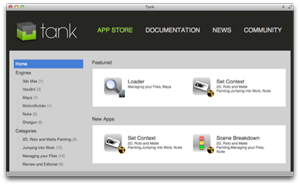 “Shotgun helped us successfully manage our global effects team on Hugo, and now Tank will allow us to unify all 13 of our facilities on a single and flexible asset management system,” said Thilo Kuther, founder, Pixomondo. “Tank’s core provides the foundation and management tools needed for a global pipeline, while Tank’s app framework provides the flexibility each location and project requires for the studio to continually evolve.”

Visual effects and animation pipelines evolve constantly as new tools, workflows and requirements emerge, such as globally distributed teams, 4K image pipelines, and stereo conversion. This evolution is an operational reality, requiring modern studios to constantly invest in rebuilding and adjusting tools and practices. Tank not only anticipates change, it provides studios with the flexibility to change faster in an organized way while ensuring stability and consistency.

“When supporting more than 700 people collaborating on the same projects across more than a dozen facilities around the globe, shared development resources and worldwide efficiency makes the difference between being profitable and going bankrupt,” said Ben Grossmann, visual effects supervisor, Pixomondo. “Each of these offices is full of people with brilliant ideas but speaking different languages with different development styles. Tank gives us a framework to unify their development so it can be used universally across shows and across facilities, and makes getting awesome new stuff as simple as downloading a new app on your phone. Using shared libraries and shared development assets through Tank gives a branch with 50 artists the power of a global development team just as large. But with the flexibility to tackle local challenges.”

Tank is fully integrated with the Shotgun production tracking platform, providing tools to keep the file system organized and an app framework that provides a wide range of independent apps for specific functions such as file publishing, versioning, and scene building. The apps will integrate natively with a growing list of artist tools such as Maya, Nuke, 3ds Max, MotionBuilder, Houdini, and Photoshop. The Python apps can be easily configured, branched, or re-imagined. Tank’s pipeline tools can even be configured per project, so that studios can continually evolve their pipelines without disrupting active productions. The Tank app store will offer a marketplace for distributing artist-friendly apps that work out of the box, making it fast for studios to bootstrap parts of their pipeline without having to reinvent the wheel. Built-in support for Git and GitHub helps studios manage their custom Tank apps, and enables cross-studio collaboration.

1. File System Management-Tank keeps your file system organized, automatically creating directories and files based on configurable templates. Configure multiple structures for different projects, or enforce consistent conventions across all projects, whatever best suits the needs of the studio.

2. Deep Shotgun Integration-Provides a link between file data and production tracking information. Interactively launch external tools from Shotgun or leverage Shotgun’s notification framework and event trigger system to keep people at every level of the production up-to-date, and to automate file-based workflows based on file or production tracking events.

3. Apps and Tank App Store-Provides more than 30 apps designed specifically with artist usability in mind, automating common pipeline functions. Loaders, publishers, and other Tank apps work out of the box. The apps are natively integrated into leading tools such as Maya, Nuke, 3ds Max, MotionBuilder, Houdini and Photoshop. Other application integration is planned, including Mari, Katana, After Effects, Softimage, Mudbox and all core tools Tank clients use in production.

4. App Development Environment– Customize Tank apps, fork them, or build your own Python apps easily using Tank’s API, then distribute them across one or more projects. Manage studio apps internally on the file system, with a repository like Git, or share with the community via built-in GitHub support.

“Asset management is a hard problem to solve, but we’re determined to get it right. We’ve invested more than seven years studying the complexities of what our clients need from an asset management system and have been experimenting with various approaches over the last four years with studios in production,” explained Don Parker, CEO, Shotgun Software. “The way Tank approaches the problem is by not trying to provide a single answer for everyone. Instead, Tank anticipates continuous change and improvements in the pipeline across multiple studios and provides a growing ecosystem of apps and tools to support pipeline evolution in a controlled and organized way.”

Tank is currently in private beta with more than 20 clients. The Tank development and design team is actively partnering with the private beta clients and rapidly publishing new apps to the Tank App Store for all Tank customers to use.

Join the private beta at www.shotgunsoftware.com/tank

Shotgun Software was founded in 2006 by a group of visual effects professionals to build production tracking, review and asset management solutions for modern studio pipelines. The founding members worked together on a major studio animated feature and develop tools to fill the mounting industry need for a commercially viable system for managing complex projects spread across multiple locations. Shotgun is actively developing the system with more than 300 industry studios including Digital Domain, Double Negative, Reliance, Framestore, Pixomondo, Playstation, Blizzard and Zoic Studios. For more information and an online demonstration visit http://www.shotgunsoftware.com