For Tom Zweibel, digital video producer for the New York Knicks, the workday doesn’t end when the final buzzer sounds. When the game’s over, it’s time to edit all the footage he’s just shot for delivery to any of the Knicks’ internal or external platforms. 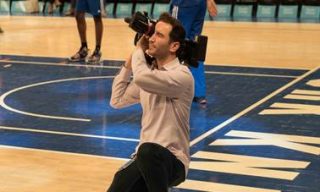 Zweibel shoots about 12 to 14 hours of video every week, a mix of pre-game interviews, press conferences, shoot-arounds, Knicks’ promotional pieces and of course, all game footage at home and on the road. Zweibel often needs to deliver content for the web or to a broadcast network immediately after a game, so he needs a camera that can keep up with his workload and schedule: Sony’s FS7.

He made the switch to the FS7 recently, after considering his primary needs: mobility, frame rate options for slo-mo and other effects, image quality and an edit-friendly codec. Zweibel worked with Sony and AbelCine to meet all his technology needs. He also rents his lenses from AbelCine, using B4-mount zoom lenses (Canon or Fujinon) with an HDx35 Mark II adapter.

The result is a camera system that more than delivers the “look” he is after.

“One of the big reasons I chose the FS7 is that my camera has to be versatile,” he said. “It has to do multiple things and wear different hats, and it does all that. I throw an ENG lens on it and I can shoot incredible game highlights. Then I’ll pop that off and put on a nice fast wide angle, and it becomes a whole other camera using different parts of the sensor. I’m very happy with its versatility.” 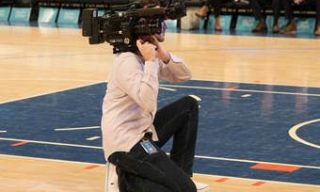 Before and during games, Zweibel is a mobile one-man operation, moving around the court, the tunnels and the media areas to get a variety of shots. Compared to his previous choices of video cameras, the FS7 is big leap forward.

With tight turnaround times a common requirement, getting the footage edited quickly and easily is another main concern.

“The XAVC-I codec is really edit friendly,” he said. “It was paramount that I had a functional codec that could work within my NLE. Often there will be a shot I need to upload as quickly as possible. Otherwise, I’ll just log all of the highlights and they’ll be up on our website the next morning. So I’ll be editing all through the night after the game and then submit content in the morning.”

Designed for handheld operation, the FS7 also easily converts to shoulder-mount or other configurations.

“Its ergonomics are great so I don’t need a rig for it,” Zweibel said. “I do use a rig when I use the larger ENG lenses, but when I use some of the smaller lenses on it, I can throw it on my shoulder and it’s really light, maneuverable and flexible. I can really move around and shoot from an immersive angle, especially during pregame I can easily roam around during the layup lines and get the beauty shots that I need for the content that we produce.

In most arenas, the lighting often changes to full power during play to dark during player introductions or half-time performances. Zweibel said the FS7 adapts well to different shooting environments, which makes his job easier.

“I do shoot in a lot of different light environments that change very quickly from the darkness of back tunnels to the bright lights of the court,” he said. “It certainly does what I need it to do in all those different situations even though sometimes, for example, when I’m shooting with the longer ENG lens I’ll lose a lot of light so I’m almost shooting myself in the foot voluntarily. However, the camera does perform well in low light environments. “ 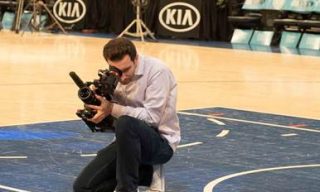 Zweibel’s footage is primarily used for content like Knicks All-Access Weekly on the team’s web site (www.nba.com/knicks) and on social media platforms, including the Knicks official YouTube Channel. The footage is also shared with broadcast networks including NBA TV and for promotional spots on MSG Network to tease upcoming games. Click here for a sample of the Knicks’ weekly feature program, shot on the FS7.

“With this image quality and recording flexibility, I’m able to get certain shots I might not otherwise get, like players warming up in the tunnel just as they’re about to run out to the court,” he said. “It really lets me do a documentary-style shooting, following the team around everywhere they go.”

Since he delivers for the web and for broadcast, Zweibel likes the flexibility of being able to shoot in 4K or HD.  He usually shoots game content in HD, using 4K mostly in controlled environments like sit-down interviews or for establishing shots.

“I shoot game footage at 1920×1080 60p,” he said. “But when there’s a moment that I know will be dramatic, let’s say at the end of the fourth quarter or the last possession, I can press a button and suddenly switch to 180 frames per second. Now, I’m shooting super slow motion and I can capture that moment in that very dramatic way, which you can see on display in this video. As the operator and editor I can say that although our footage looks great, I haven’t even really begun to scratch the surface of what this system can really do.”