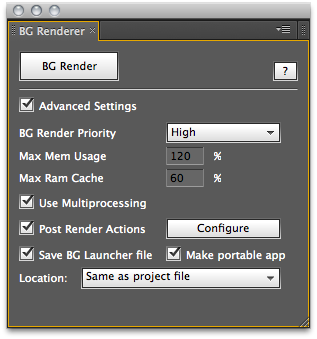 If you’re an After Effects power user who has gotten at all into scripts, you are most likely already familiar with BG Renderer, which really changed the game for scripts by providing an alternative to much more expensive solutions to any studio or individual in an After Effects render crunch.

Lloyd Alvarez apparently first devised this script on behalf of a studio that had huge rendering needs, yet was unable to harness the full computing power in-house for a simple reason. As great as the After Effects render queue is, when you click Render, the user interface – and thus the whole app – is tied up until the render is completed.

The industry solution for this problem used to be a separate render software, Nucleo Pro from GridIron Software, but Lloyd’s story is that the studio didn’t want to pony up the several hundred dollars that each license seat cost, despite that a few hundred dollars compares favorably with the cost of buying a new Mac Pro or other dedicated render station and the software to run on it.

Like other After Effects nerds, Lloyd knew that there is a free way to render After Effects compositions in the background, on spare or unused processors, while continuing to work in the After Effects UI. The aerender application installs along with the main app and can be run from the Terminal or a DOS shell, but the process is far from automatic. Getting it to work at all requires typing the correct UNIX string, and customizing it so that it doesn’t take so much processing power as to make the system unusable requires extra understanding.

BG Renderer was written to harness the full system resources while providing a low-cost interface available directly in After Effects, and it is available for all versions of After Effects from CS3 onward. If you have a system with multiple processors (you do) and sufficient RAM to support them (ideally in After Effects this means 2GB of RAM per proc, but you can sometimes get away with as little as 1GB if not working with large format footage and stills), and you’ve ever needed to keep working while pushing out a render, you’ve justified purchasing this script.

Installation and operation is simple. Place the BG Renderer.jsx script in the Script UI Panels folder within Adobe After Effects CS5.5/Scripts/ (or whatever version you’re using). Restart the application. Place an item or items in the Render Queue. Choose the script under the Window menu; if you get a warning to go to Preferences > General and enable “Allow Scripts to Write Files and Access Network,” do so and reopen the panel. 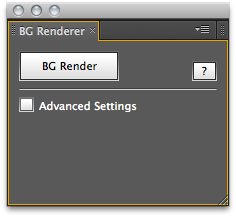 The panel that you see initially couldn’t be simpler. There’s a BG Render button, a help button and an Advanced Settings toggle. Big tip: the help section when you click on that question mark icon is very thorough and helpful – so much so that there’s no reason to do more than highlight a few advanced features here. Check it out.

Toggle Advanced Settings and you unlock the ability to set the render priority and enable multiprocessing. This is where things really kick in, but to tune it properly so that you can still work, read the help file carefully; optimum settings vary from system to system. Multiprocessing works better in CS5.5 than it has in past versions, but not without sufficient system resources and the proper preference settings.

Don’t overlook the Post Render Actions – for some people these justify rendering with this method even when you go home for the night, because the script can be set to send you an email or MMS message when your render is completed, freeing you to relax and get out of the studio even when on a crucial deadline.

New features are added from time to time – one great one is saving the BG Launcher file so that if you make some small change to system settings you don’t have to start setup from scratch.

It’s fitting that BG Renderer is the first third-party script of the week. Lloyd Alvarez is also the creator of aescripts.com and is a talented creative director in his own right, a person to whom the title “talented visionary” really does apply. This script more than any other opened a lot of people’s eyes to how much literal value there is in a good script, one that can even save you from having to buy whole new systems just for a render crunch.