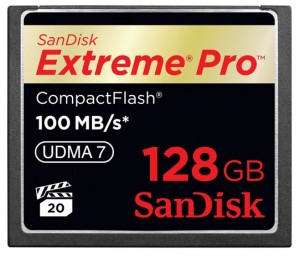 “No other product on the market can match our new card's combination of speed and storage capacity,” said Susan Park, director, product marketing, SanDisk. “By consistently pushing the boundaries of flash innovation, we are able to develop advanced products not found anywhere else.”

The 128GB SanDisk Extreme Pro CompactFlash card is available now for preorder at www.sandisk.com, and will be available at retailers worldwide later in Q1 2011. The card carries a suggested retail price of $1,499.99.

SanDisk Corporation is the global leader in flash memory cards – from research, manufacturing and product design to consumer branding and retail distribution. SanDisk's product portfolio includes flash memory cards for mobile phones, digital cameras and camcorders; digital audio/video players; USB flash drives for consumers and the enterprise; embedded memory for mobile devices; and solid state drives for computers. SanDisk is a Silicon Valley-based S&P 500 company, with more than half its sales outside the United States.