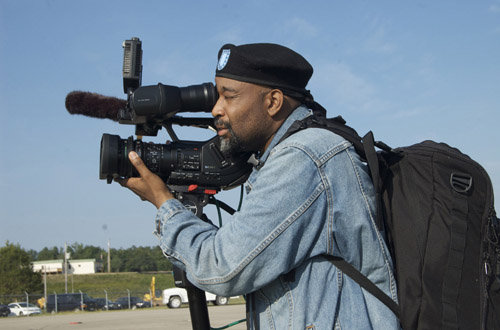 Videographer Ajay Johnson is about finished with his edit on Sea to Shining Sea, a documentary following 15-year-old Kimberly Anyadike’s dream of piloting a single-engine Red Tail airplane from Compton, California to Newport News, Virginia. The project, done in conjunction with Tomorrow’s Aeronautical Museum, a flight school and youth mentoring center in Compton, California, honors the first black US military pilots, the Tuskegee Airmen, and their heroic WWII legacy.

“We shot 600 gigs of video in five different cities, plus interviews, footage at museums and shots of the plane in various stages of flight,” says Johnson. “The Sachtler FSB 6 head and SOOM camera support helped me to get some of the most exciting material I’ve ever captured.”

Johnson appreciated the versatility and low weight of the multifunctional SOOM. “The cool thing about SOOM is that I can use it in a normal tripod configuration, or quickly switch to monopod, baby or HiPod configuration. And it’s easy on baggage fees–even with the tripod extended, I could still carry it with two fingers,” he says. “Yet, it handled the rugged terrain of the Grand Canyon and configured easily when I needed to get over or even snake through a crowd.”

While documenting Anyadike’s progress across the country, Johnson was constantly on the move. Tracking a landing plane can be tricky. Johnson and camera needed to be steady as he watched and waited to capture the plane on the horizon. He then had to move quickly to the next position to capture Anyadike and the Tuskegee Airmen when the plane hit the ground at various locations across the country. “I would start with the SOOM Tube-which is the monopod configuration-on the ground extended to eye level, sometimes using the foot plate to stabilize it, then when the plane landed, I’d pick it up and run to the next shot at the meet and greet,” he explained.

“When shooting the interviews at Tuskegee Air Museum and the Virginia Air and Space Museum, we shot one on one with Kimberly, Chauncey E. Spencer II and Colonel Roosevelt Lewis, Jr., using the EX3 camera and Zeiss DigiPrime lenses.
The SOOM’s TriPod configuration gave us a height range of over two-feet to nearly 5-feet so it accommodated each interview,” he added.

“What’s more,” Johnson explained, “I often found myself in situations where Kimberly was mobbed on all sides by crowds and press. I put the SOOM in HiPod mode and extended it over their heads. I ran video to a small monitor so I could easily see what to shoot even with the HiPod up over 8 ft. Another trick I did was switch to SOOM Tube mode and stuck the camera between people’s bodies to get the shot. With the remote on the zoom control, I didn’t have to keep my hands on the EX3 camera.

“And, for some sit-down interviews, the SOOM TriSpread (mid-level spreader) became a single stage baby tripod with a 19-inch height. I placed it on a table, when there was no room for a ‘normal’ tripod. Before I got the SOOM, I would have had to hold the camera in my lap to make the shot.

“From now on to get the exciting footage needed for any project I do, the SOOM will be my constant traveling companion, whether I’m shooting through the crowd on a red carpet or aiming the camera to shoot in, over, or around a variety of locations and obstacles.”

When Johnson is finished editing, Sea to Shining Sea will become two documentaries; one a behind-the-scenes look at the making of, and the other an homage to a young girl’s dream of following in the footsteps of the Tuskegee Airmen. They will begin making the Festival circuit to coincide with the release of George Lucas’s feature, Red Tails.

Sachtler, founded in 1958 by cameraman Wendelin Sachtler, is the worldwide market leader for professional camera support systems for cinematography and television production, its name a symbol of top quality and reliability for decades. With an extensive range of camera support systems as well as a finely modulated product line of reportage lighting, Sachtler is the highly qualified partner for cameramen, film and TV studios. Since 2000 Sachtler has been offering the artemis modular camera stabilizer system. With its numerous workshops and training sessions, the Wendelin Sachtler Academy has become a top address worldwide for invaluable know-how and the exchange of information, creating the ideal international platform for creative talents.

A Snapshot of The Vitec Group

Vitec is an international Group principally serving customers in the broadcast, photographic and military, aerospace and government (MAG) markets. Listed on the London Stock Exchange with 2009 revenue of £315 million, Vitec is based on strong, well known, premium brands on which its customers worldwide rely. Vitec is organised in three divisions: Imaging & Staging, Videocom and Services.

Videocom designs and distributes systems and products used in broadcasting and live entertainment, film and video production and MAG.

More information can be found at www.vitecgroup.com